50 things to do before you die 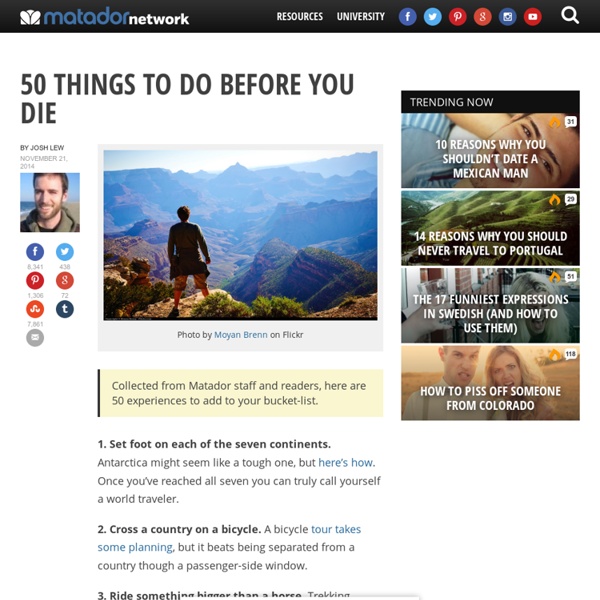 world in slow motion Notes on a 10 Day Silent Meditation Retreat | AlmostFearless.com Today’s post is by Drew, my husband. This year he did a 10 day meditation retreat in southern Thailand starting on New Year’s Eve. I was so fascinated by his experience, I asked him to write about it. I rolled into Suann Mokkh monastery with what I expected would be plenty of time. Ten minutes later, they closed registration. A very near miss. It seemed the price for rolling in late was that I was given a pink mosquito net. None of these things bothered me in the slightest though, I WAS HERE! In the hours between registration and silence, I set up my living space and chatted with a few fellow meditators, none of whom were American, as far as I could tell (I have something of an ear for American, being one myself). Also, If you are as cynical as I am, you will spend much of your first hours within the group sizing people up, deciding with utter certainty who will and will not make it to the end of the retreat. “It says ‘Big Bear!” Man, did I call that? And the meditation, you ask?

Getting Sick on a Round-the-World Trip Most people do get sick on the road at one point in their travels. If you are lucky, your illness will require a quick trip to the doctor and some antibiotics or anti-parasite medication. If you are me, your illnesses will straddle several continents, a multitude of body parts and an exploration of Eastern and Western medicine – all in the span of one year. Long-term readers of the blog know that I used to have a ‘days of sickness’ counter in the righthand column, but removed it because the sick days quickly outnumbered the healthy days and I stopped counting altogether. I started the trip with a cold and had I not been so stubborn about ignoring it, I would have been able to avoid a lot of doctor’s visits and insurance claims. What started in April 2008 as a classic cold in bone-chillingly damp Punta Arenas blossomed into bronchitis, and then (because I refused to admit how sick I really was) went downhill from there. The tiny village of Verkhnyaya Ivolga, Siberia. Do: Don’t: -Jodi

I F*cking Love India | AlmostFearless.com So we fly into New Delhi, deciding immediately to take the rest of the day off from travel, as the baby squirmed, fussed and whimpered the entire two hour flight. We used our trusty Lonely Planet India — a tome, which I only pull out when I’m day dreaming about where to go next — or like now, when I’m sitting at the New Delhi airport with a fussy baby, lugging all my belongings, with no backup plan. We shut the book, thwamp. Shuffle. Whoosh. Out on our balcony, I snap pictures of the street view. I’m being oblivious in my interest, face pressed again my camera, until I notice the coconut walla on the street below is trying to convince me to buy a coconut by miming throwing one up to me, in it’s green hull, like a football. They bring us room service. Train tickets. This is a the part where Drew and I fight. “You can’t buy tickets here. Drew doesn’t say a word. “Wait! “Wait, wait, let me show you.” I said, “No!” I felt bad about that later. Drew and I didn’t talk about it until later.

Azerbaijan travel guide This article is about the country of Azerbaijan. There is also a region of Iran called Azerbaijan. Understand[edit] Azerbaijan regained its independence after the collapse of the Soviet Union in 1991. The Nagorno-Karabakh enclave, which is part of Azerbaijan, was the subject of a war with Armenia that has left it a de facto independent republic, which is not internationally recognized by any UN member including, ironically, Armenia which "supports" it. Azerbaijan has lost 20% of its territory and must support some 800,000 refugees and internally displaced persons as a result of the conflict. The majority of the population (over 90%) is composed of Azeris, who share a culture very similar to Turkey. Celebrate[edit] These are the nationally recognized holidays for people living in Azerbaijan. Climate[edit] Subtropical forests near Lerik. Azerbaijan is known for having nine of the 11 defined ecological zones. Terrain[edit] Mud volcanoes in Gobustan. Elevation extremes lowest point highest point

Why I Quit My Job to Travel Around the World A few weeks ago in Hpa-An, Burma, I was walking down Mount Zwegabin after sleeping on the floor of a monastery at the summit. It was just after dawn, and the claustrophobic heat of the day had yet to take hold. I was alone, and it was completely, almost eerily silent as I made my way to the valley below. Suddenly, I became overwhelmed – as in, tears pouring down my face overwhelmed – by how lucky I was to be there. Future Traveler, Aged 4. So why did I quit to travel around the world? During the course of this trip, one of the most frequent questions I receive from home is why – really why – did I give it all up to travel around the world. Until recently, I never contemplated a post explaining why I chose to quit my job and travel. Overlooking Batad’s Rice Terraces, in the Phillippines When I was still in high school, the PBS did a documentary on the Trans-Siberian trains. My dreams of round-the-world travel percolated under the surface as one year dissolved into the next. -Jodi

You’ve Got Questions, I’ve Got Answers — NoDebtWorldTravel.com I’ve been on the road over two weeks and I’ve seen a repeated pattern of questions people ask me. I thought I would answer the vast majority of them in what I call nodebtworldtravel.com’s Frequently Asked Questions or FAQ.Q: Let’s get down to it Brian. How much is this costing you? Not as much as you think. Miami – Rio de Janeiro – Buenos Aires – Santiago – Lima – Cusco – Quito – San Jose – Guatemala City – Miami from US$1749 (plus taxes)Chicago – Tokyo – Bangkok – surface – Kuala Lumpur – Delhi – Vienna – surface – Paris – Chicago from US$1999 (plus taxes)Los Angeles – London – Paris – Cape Town – surface – Johannesburg – Hong Kong – Beijing – Los Angeles from US$2499 (plus taxes) The hostel in Hawaii cost me $25 a night and here in Tokyo is costs about $30. The most money I’ve spend has been on tours in Hawaii, which were about $100 a pop. First, get the Hollywood horror flick imagery out of your head. There are shared kitchens and bathrooms, again just like in a college dorm.