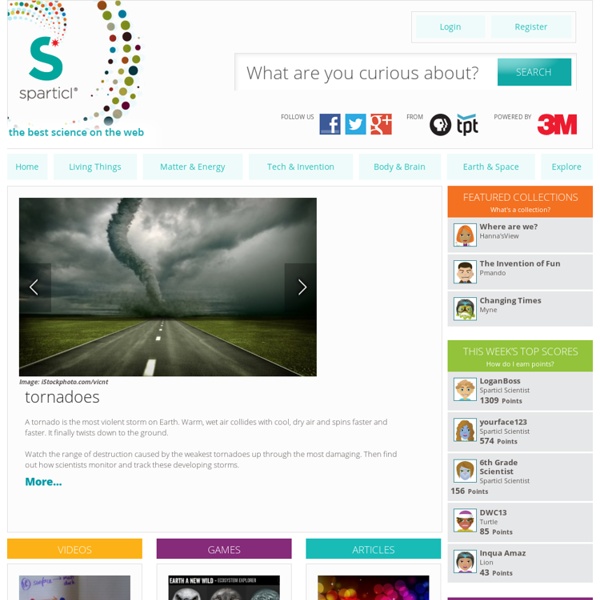 Manifesto for 21st Century Teacher Librarians Editor’s Note: This article was originally published as a Tag Team Tech column on www.voyamagazine.com. It has been reprinted and reproduced numerous times and in many places. We are making it available here to ensure that all of our readers have seen it. Physics explained in 10 mind-bending GIFs Just because the laws of physics are consistent, that certainly doesn’t mean they always make sense to our squishy mammal brains. Our day to day experiences don’t include advanced materials, superconducting magnets, or extreme temperatures. You might be sure your eyes are deceiving you when dealing with something like that, but it’s just science. We’re going to use GIFs to zero in on just that kind of thing — weird physics that makes you scratch your head.

How to build a real 'Star Wars' lightsaber The idea behind a lightsaber is simple genius: a light-weight and immensely powerful tool that uses a blade of energy to not only slice up disciples of the Dark Side in a single blow but also act as an effective shield against laser blasts. So why don't we have working lightsabers in real life? Surely physicists must be smart enough (and big enough Star Wars fans) to be able to produce one of these incredible objects. The obvious way of building a lightsaber would be to use a laser, which can be seen as a particularly bright and directional burst of light.

White Ravens Each year the language specialists (Lektoren) at the International Youth Library (IYL), in Munich, Germany, select newly published books from around the world that they consider to be especially noteworthy. This list of books is compiled into the annual White Ravens Catalogue, which is introduced each year at the Bologna (Italy) Children's Book Fair. The White Ravens Online Catalogue, which includes all titles from 1993 through 2007, was created by ICDL researchers in collaboration with the IYL and is available on the ICDL web site with the permission of the International Youth Library. The White Raven label is given to books that deserve worldwide attention because of their universal themes and/or their exceptional and often innovative artistic and literary style and design. The titles are drawn from the books that the IYL receives as review or donation copies from publishers and organizations around the world.

See a TED Talk about POGIL Pogil - Process Oriented Guided Inquiry Learning Andrei Straumanis Gives TED talk in San Miguel, Mexico POGILer Andrei Straumanis gave a 2010 TED talk in San Miguel, Mexico, on the benefits of using POGIL in the classroom. Click on the link above to watch Andrei's presentation. The POGIL Project is grateful for the support of the National Science Foundation, the Department of Education, the Hach Scientific Foundation, and the Toyota USA Foundation. Click the following links for our privacy policy and terms of use. DiversityCentral.com: Cultural Diversity at Work FEBRUARY: African American History Month In 1926 Dr. Carter G. Woodson instituted the first week-long celebration to raise awareness of African Americans’ contributions to history.

bulletin boards Welcome to My Classroom - My Very Own Treasure Box :) It is finally ready for the 2011-2012 school year! This is our literacy centers wall - there is a combination of teacher created & students created centers. View of our door from the inside :) Literary Genres Posters close to our library

The Arrow of Time The debate about the nature of time and its passage is a long and venerable one. The issues addressed by pre-Socratic philosophers such as Heraclitus and Parmenides about whether time 'flows' or not prefigure present day philosophical arguments. In his talk to the Blackheath Philosophy Forum Huw Price chose as his starting point the views of cosmologist Sir Arthur Eddington - a prominent figure in the first half of the 20th century, but little known today.

Teach your students the right way to Google Kelly Maher November 24th, 2014 In the age of the split-second Google search, it’s more critical than ever to train students to distinguish between primary and secondary sources As in decades past, proper research methods are an essential skill for today’s students.