Graphing Stories - 15 seconds at a time 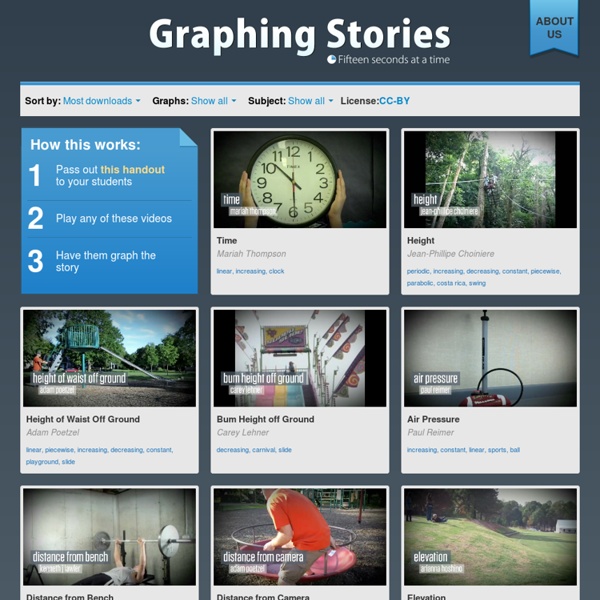 The 11 most beautiful mathematical equations This equation of special relativity describes time dilation. Shutterstock/optimarc Mathematical equations aren't just useful -- many are quite beautiful. And many scientists admit they are often fond of particular formulas not just for their function, but for their form, and the simple, poetic truths they contain. Project-Based Engineering for Kids Original, reliable, and fun collection of project-based engineering lessons for kids (and everyone!) Excited about making STEM project ideas accessible to everyone? Pledge on Patreon to keep the mission going. At the Educator tier, you can access lesson plans and more teaching resources! If you enjoy these projects, then check out my books Rubber Band Engineer and Duct Tape Engineer! || Everything I make

Math Survey – Students I am taking Justin Lanier’s call to action from his talk “Beyond Beauty” at the Global Math Department. I posted over the weekend about the results of my survey of teachers and staff at my school. Today, I gave it to my students. Conceptual Understanding of Fractions - UCI Wiki hosted by EEE Title Conceptual Understanding of Fractions All Grade Levels [Current Contributors: June Choi, Gina Lee, Jenny Nguyen, Doris Ni, and Poonam Patel; Previous Contributors: Kaitlin Franks, Jane Kim, Lori Labuzetta, Cynthia Leon, and Cheryl Panado]

Graphing Stories Or: Best Lesson Ever Or: Why It’s Nice To Have Some Totally Extraneous Skills Or: Skip The Blah-Blah. Downloads At The End. Boole - 19th Century Mathematics The British mathematician and philosopher George Boole, along with his near contemporary and countryman Augustus de Morgan, was one of the few since Leibniz to give any serious thought to logic and its mathematical implications. Unlike Leibniz, though, Boole came to see logic as principally a discipline of mathematics, rather than of philosophy. His extraordinary mathematical talents did not manifest themselves in early life. He received his early lessons in mathematics from his father, a tradesman with an amateur interest in in mathematics and logic, but his favourite subject at school was classics. He was a quiet, serious and modest young man from a humble working class background, and largely self-taught in his mathematics (he would borrow mathematical journals from his local Mechanics Institute). But it was his contributions to the algebra of logic which were later to be viewed as immensely important and influential.

Connect the Dots But first, they must embrace science, technology, engineering and math (STEM) to build the skills that will serve as their tool set for the future. For that to happen, we must work together to ignite their curiosity and get them excited about STEM in their everyday lives. So we ask you to join us in connecting the dots between learning and life. Together, we can ignite the spark in students around the clock and around the world. While after-school learning and summer programs provide rich opportunities to keep students inspired beyond the classroom, we know that unequal access to these programs can contribute to disparities in student achievement. STEM Camp combines hands-on labs, engineering challenges, digital investigations, and more - all designed to immerse kids in the grand challenges of science set forth by the National Academy of Engineering.

Mr. B's Blog: I Volunteer as Tribute: The Final HSCN The arena set, the districts formed, the Capitol ready. Sounds like the beginning of the Hunger Games, doesn't it? This was the staging for the final HSCN: The Math Hunger Games. To bring you up to speed if you are not familiar with my HSCN, I hosted evenings three times a month where I instructed parents on math and reading. This is explored more in depth in this blog post. The final HSCN was Students vs. Mathematics Design Collaborative — MyGroupGenius Skip to main content Mathematics Design Collaborative The Mathematics Design Collaborative ( MDC ) is a group of curriculum designers, assessment developers, professional learning specialists, and district and school networks. The Bill and Melinda Gates Foundation has funded MDC to develop high-quality instructional tools and professional support services to realize its ambitious goal of having 80% of low-income and minority students ready for college by 2025. MyGroupGenius is a project of the Bill & Melinda Gates Foundation.