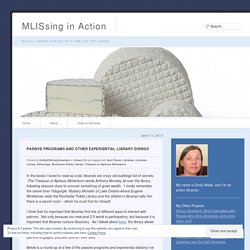 The Treasure of Alpheus Winterborn sends Anthony Monday all over the library, following obscure clues to uncover something of great wealth. I vividly remember the scene from Yobgorgle: Mystery Monster of Lake Ontario where Eugene Winkleman visits the Rochester Public Library and the children’s librarian tells him there is a secret room – which he must find for himself. It’s In the Bag: Welcome Back to The Library Goodness! In May, I thought it would be fun to welcome the teachers back with a “goody bag” from the library. 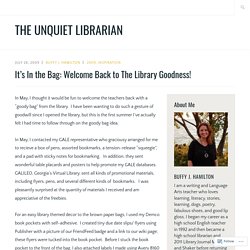 I have been wanting to do such a gesture of goodwill since I opened the library, but this is the first summer I’ve actually felt I had time to follow through on the goody bag idea. In May, I contacted my GALE representative who graciousy arranged for me to recieve a box of pens, assorted bookmarks, a tension-release “squeegie”, and a pad with sticky notes for bookmarking. In addition, they sent wonderful table placards and posters to help promote my GALE databases.

GALILEO, Georgia’s Virtual Library, sent all kinds of promotional materials, including flyers, pens, and several different kinds of bookmarks. Beyond Survival in a School Library. The Incredibly True Adventures of a School Librarian: Library Orientation Scavenger Hunt. Tell me and I forget. 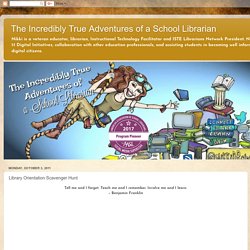 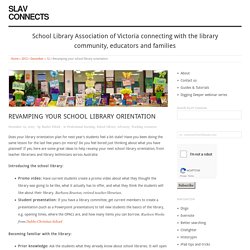 Have you been doing the same lesson for the last few years (or more)? Do you feel bored just thinking about what you have planned? If yes, here are some great ideas to help revamp your next school library orientation, from teacher librarians and library technicians across Australia: Introducing the school library: All bags created by Trish Henry. Bulletin boards. 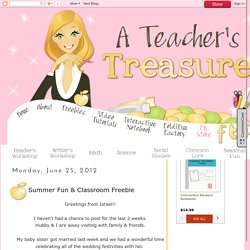 This is our literacy centers wall - there is a combination of teacher created & students created centers. View of our door from the inside :) Literary Genres Posters close to our library My favorite part of the room!!!!!! School libraries help students learn. Manifesto for 21st Century Teacher Librarians. Editor’s Note: This article was originally published as a Tag Team Tech column on www.voyamagazine.com. 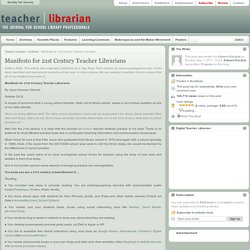 It has been reprinted and reproduced numerous times and in many places. We are making it available here to ensure that all of our readers have seen it. Manifesto for 21st Century Teacher Librarians. Class Handouts and Resources. Open Educational Resources (OER): Resource Roundup. The White Rhino: A Chicago Latino English Teacher. Part I: Introduction--What inspired my argumentative response? 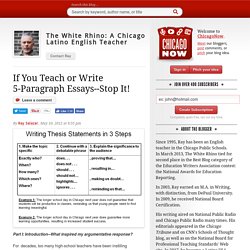 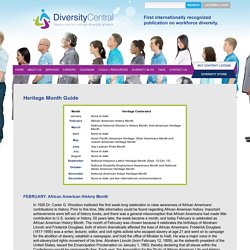 Carter G. Woodson instituted the first week-long celebration to raise awareness of African Americans’ contributions to history. Prior to this time, little information could be found regarding African American history. Important achievements were left out of history books, and there was a general misconception that African Americans had made little contribution to U.S. society or history. 50 years later, the week became a month, and today February is celebrated as African American History Month. MARCH: National Women's History Month National Women's History Month was established by presidential proclamation in order to draw attention to and improve the focus on women in historical studies. MAY: Asian/Pacific American Heritage Month and Older Americans Month. Login - Powered by WSIPC. Daniel Willingham - Daniel Willingham: Science and Education Blog. ​Coverage from NPR made it sound like Hart & Risley had been debunked, with the headline “Let’s stop talking about the 30 million word gap.”But the Sperry report doesn’t really upend Hart & Risley.First, Sperry et al. claim that the Hart & Risley finding has never been replicated. 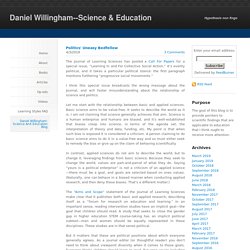 I am not sure what Sperry et al. mean by “replicate,” because the conceptual idea that socioeconomic status and volume of caregiver→child speech has been replicated. (The following list is not offered as complete—I stopped looking after I found five.)Gilkerson et al (2017)Hoff (2003)Hoff-Ginsberg (1998)Huttenlocher et al (2010)Rowe (2008)None of these is an exact replication---they have variations in methods, population, and analyses. What is the role of a scientist in these difficult application issues?

White Ravens. Each year the language specialists (Lektoren) at the International Youth Library (IYL), in Munich, Germany, select newly published books from around the world that they consider to be especially noteworthy. 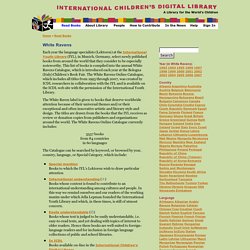 This list of books is compiled into the annual White Ravens Catalogue, which is introduced each year at the Bologna (Italy) Children's Book Fair. The White Ravens Online Catalogue, which includes all titles from 1993 through 2007, was created by ICDL researchers in collaboration with the IYL and is available on the ICDL web site with the permission of the International Youth Library. The White Raven label is given to books that deserve worldwide attention because of their universal themes and/or their exceptional and often innovative artistic and literary style and design. The titles are drawn from the books that the IYL receives as review or donation copies from publishers and organizations around the world. The White Ravens Online Catalogue currently includes:

Resources for School Librarians. YA%20Lit%20Pairings%20-%20Kim.pdf. Profil d'utilisateur : Debbie Reese. Technology, libraries, and schools. VLMS - Admin. National Culture. About the research Professor Geert Hofstede conducted one of the most comprehensive studies of how values in the workplace are influenced by culture. He analysed a large database of employee value scores collected within IBM between 1967 and 1973. The data covered more than 70 countries, from which Hofstede first used the 40 countries with the largest groups of respondents and afterwards extended the analysis to 50 countries and 3 regions.

Subsequent studies validating the earlier results include such respondent groups as commercial airline pilots and students in 23 countries, civil service managers in 14 counties, 'up-market' consumers in 15 countries and 'elites' in 19 countries. In the 2010 edition of the book Cultures and Organizations: Software of the Mind, scores on the dimensions are listed for 76 countries, partly based on replications and extensions of the IBM study on different international populations and by different scholars. Culture only exists by comparison. Cultural Insights - Geert Hofstede. National Culture. Programming. What are the top Computer Programming Schools in Seattle, WA? There are 3 computer programming schools in Seattle, Washington. Seattle has a general population of 563,374 and an overall student population of 96,368. Approximately 15,092 of Seattle's students are enrolled in schools that offer computer programming programs.

Highline Community College is the largest computer programming school in Seattle, based on student population. In 2010, Highline Community College graduated approximately 8 students with credentials in computer programming. A reported 8 students graduated with credentials in computer programming in Seattle in 2010. No Time For The Gym? Do These Effective Desk Stretches Instead. Not everyone has time to go to the gym or squeeze in a short run. Especially those who work tedious hours with long commutes. In order to maintain one’s health, creativity is required. Although the office may seem like the worst place to exercise, it actually is a great place to start. DeMonkey. 22 Tricks That Can Make Anyone A Keyboard Ninja. Using the mouse to perform repetitive tasks is not productive. The best way to boost your efficiency levels when browsing the internet is by using keyboard shortcuts. Despite contrary belief, the keyboard was designed to be used without looking at one’s hands.

The best way to get familiar with keyboard shortcuts is to first learn how to type while keeping your eyes on the screen. Once you’ve mastered basic typing, it’s time to upgrade your skills to the keyboard shortcuts mentioned above. These days, such shortcuts are becoming a necessity, due to the increased use of tabs, screens, and windows. 3 Things You Didn’t Know About Microsoft Excel. Are you utilizing Microsoft Excel to its fullest? Here are three things you might not have known Excel could do: Sparklines With Sparklines in Excel 2013, you are able to provide a more in-depth view of the data other than just simply using the numbers. Use Sparklines to show trends such as increases and decreases or economic cycles. Learn how to create Sparklines Pivot Charts Pivot Charts allow you to provide a picture for the data in your Pivot Table. Use Pivot Charts to help better explain data to your intended audience. Using Google Docs to prepare students for Smarter Balanced Assessments.

How to Survive the Zombie Librarian Apocalypse! How'd You Do That? Creating & Sharing Digital Flyers, Posters & Infographics. The 5-day a week podcast for remarkable but very busy teachers. by Vicki Davis: Teacher, Blogger, Edtech Experimenter. Literally Unbelievable. Fresh Ed - A New Way to Teach and Learn. Making Curriculum Pop. MiddleWeb: All About the Middle Grades.