School of Mathematics and Physics 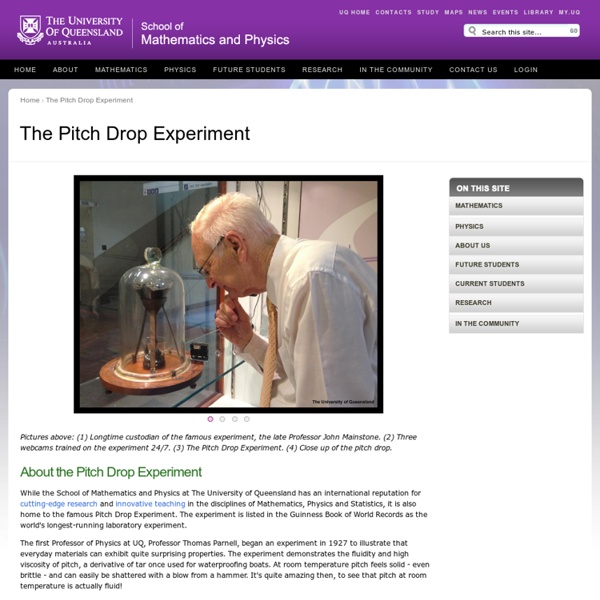 Improbable Research - Longest Running Experiments by Marc Abrahams We are happy to report that three of the world’s longest-running scientific experiments are indeed still running. It has been a number of years since anyone checked on all three. With assistance from scientists in several nations, we have managed to do so. Background on these Experiments In 1984, the European Journal of Physics published three remarkable reports, each describing a different experiment that had been continuing for decades. The Pitch Drop Experiment In Brisbane, pitch is dropping. As described by R. In the foyer of the Department of Physics at the University of Queensland in Brisbane is an experiment to demonstrate, for teaching purposes, the fluidity and the very high viscosity of pitch, set up in 1927 by Professor Thomas Parnell, the first Professor of Physics there. Here is the record as it was presented in 1984: A seventh drop fell during July 1988 during World Expo 88. Now, in the spring of 2001, the pitch is flowing as heartily as ever. The Beverly Clock

Equation Analysis Test/quiz/iq test your brain power! This test does not measure intelligence, your fluency with words, creativity or mathematical ability. It will, however, give you some gauge of your mental flexibility. few people have been found who could solve more than half of the questions on the first try. many, however, reported getting answers long after the testing had been set aside, particularly at unexpected moments when their minds were relaxed. some reported solving most of the questions over a period of several days. Take the test as your personal challenge. Some of them I have made up myself therefore you will not find the answers anywhere else on the web! Instructions: Each equation below contains the initials of words that make the statement true. If you get more than 15 Correct you will be eligible to add your name and score to the top scores here!

Museum of the History of Science How Stars Are Named How Stars Are Named The Ancient Arabic Names The brightest stars in the sky of Earth are also the ones with the most ancient names. Names such as Betelgeuse, Achernar, Sirius, Deneb, and Algol are usually Arabic, dating from around the tenth century when Arab astronomy flourished. Less-bright stars were usually not given proper names at the time, and were thus harder to talk about. The Bayer System In 1603, a German lawyer by the name of J. This system was not adhered to rigorously, though. The Flamsteed System Eventually, though, you’ll run out of Greek letters — there are only 24 of them, after all. The astronomical community accepted his new numbering scheme, but retained Bayer’s Greek-letter names for the brighter stars that already had them. Then the telescope came along The Flamsteed system worked just fine until astronomers started using telescopes.

Milgram's Obedience Experiments | The Perils of Obedience By Kendra Cherry Updated December 16, 2015. If a person in a position of authority ordered you to deliver a 400-volt electrical shock to another person, would you follow orders? Most people would answer this question with an adamant no, but Yale University psychologist Stanley Milgram conducted a series of obedience experiments during the 1960s that led to some surprising results. These experiments offer a compelling and disturbing look at the power of authority and obedience. More recent investigations cast doubt on some of the implications of Milgram's findings and even question the results and procedures themselves. Learn more about the experiments, the results and some of the major criticisms of Milgram's infamous research. Introduction to the Milgram Experiment "The social psychology of this century reveals a major lesson: often it is not so much the kind of person a man is as the kind of situation in which he finds himself that determines how he will act." Loaded: 0% Progress: 0%

Anonymous Blogging with Wordpress & Tor Download this guide as a pdf An early draft of this guide was written by Ethan Zuckerman on April 13, 2005 and updated on October 1, 2006. On August 8, 2007 Global Voices Advocacy published an updated and linkable, blogging-friendly, HTML version of the guide, along with a downloadable PDF file. On March 10th, 2009, the guide has been updated once again so that all the tips are also compatible with Tor's recent update. Anonymous Blogging with Wordpress and Tor By Ethan Zuckerman By Tor Project (CC-BY-SA-3.0-us) via Wikimedia Commons IntroductionDisclaimerI – Writing from shared computersZero Install Bundle for Windows (for any portable media drive)a) Download Tor Browser Bundleb) Extract the Tor Browser file in your USB keyII – Writing from your personal computer Step 1: Disguise your IPa) Install Firefox.b) Install Tor.c) Install Torbutton.d) Turn on Tor in Firefox and test it out.What if Tor never connects? Introduction Disclaimer Onto the geekery: I – Writing from shared computers Why? Why?

Nanotubes and Buckyballs Home > Introduction > Nanotubes and Buckyballs Last Updated: Tuesday, 29-May-2012 06:53:42 PDT Go directly to Websites Nanotube: "Conceptually, single-wall carbon nanotubes (SWCNTs) can be considered to be formed by the rolling of a single layer of graphite (called a graphene layer) into a seamless cylinder. A one dimensional fullerene (a convex cage of atoms with only hexagonal and/or pentagonal faces) with a cylindrical shape. Strictly speaking, any tube with nanoscale dimensions, but generally used to refer to carbon nanotubes, which are sheets of graphite rolled up to make a tube. Nanotubes can be either electrically conductive or semiconductive, depending on their helicity, leading to nanoscale wires and electrical components. A nanotube's chiral angle--the angle between the axis of its hexagonal pattern and the axis of the tube--determines whether the tube is metallic or semiconducting. A graphene sheet can be rolled more than one way, producing different types of carbon nanotubes.