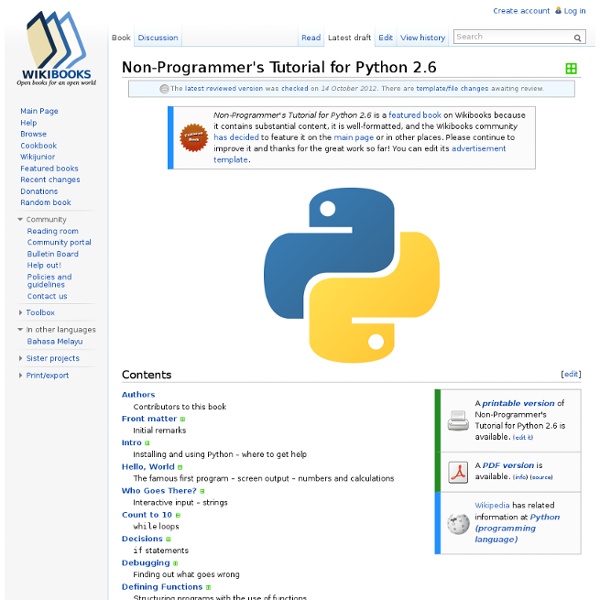 Non-Programmer's Tutorial for Python 2.6 From Wikibooks, open books for an open world Jump to: navigation, search For Python 3, see Non-Programmer's Tutorial for Python 3. Contents[edit] Authors Contributors to this book Front matter Initial remarks Intro Installing and using Python – where to get help Hello, World The famous first program – screen output – numbers and calculations Who Goes There? Interactive input – strings Count to 10 while loops Decisions if statements Debugging Finding out what goes wrong Defining Functions Structuring programs with the use of functions Advanced Functions Example (Almost) mind-blowing example of how programmers can think Lists Variables containing more than one value For Loops A second kind of loop Boolean Expressions Computer logic – true and false – and and or – not Dictionaries Variables containing key/value pairs Using Modules Extensions to the standard set of functionality More on Lists Using elements or parts of lists Revenge of the Strings Advanced text manipulation File IO Views

Think Python: How to Think Like a Computer Scientist How to Think Like a Computer Scientist by Allen B. Downey This is the first edition of Think Python. Buy this book at Amazon.com Download Think Python in PDF. Read Think Python in HTML. Example programs and solutions to some problems are here (links to specific examples are in the book). Description Think Python is an introduction to Python programming for beginners. Some examples and exercises are based on Swampy, a Python package written by the author to demonstrate aspects of software design, and to give readers a chance to experiment with simple graphics and animation. Think Python is a Free Book. If you have comments, corrections or suggestions, please send me email at feedback{at}thinkpython{dot}com. Other Free Books by Allen Downey are available from Green Tea Press. Download Precompiled copies of the book are available in PDF. Python 3.0 Most of the book works for Python 2.x and 3.0. Michael Kart at St. Earlier Versions Translations and adaptations

Think Complexity by Allen B. Downey Buy this book from Amazon.com. Download this book in PDF. Read this book online. Description This book is about complexity science, data structures and algorithms, intermediate programming in Python, and the philosophy of science: Data structures and algorithms: A data structure is a collection that contains data elements organized in a way that supports particular operations. This book focuses on discrete models, which include graphs, cellular automata, and agent-based models. Complexity science is an interdisciplinary field---at the intersection of mathematics, computer science and physics---that focuses on these kinds of models. Free books! This book is under the Creative Commons Attribution-NonCommercial 3.0 Unported License, which means that you are free to copy, distribute, and modify it, as long as you attribute the work and don't use it for commercial purposes. Download the LaTeX source code (with figures and a Makefile) in a zip file.

Text Processing in Python (a book) A couple of you make donations each month (out of about a thousand of you reading the text each week). Tragedy of the commons and all that... but if some more of you would donate a few bucks, that would be great support of the author. In a community spirit (and with permission of my publisher), I am making my book available to the Python community. Minor corrections can be made to later printings, and at the least errata noted on this website. Email me at <mertz@gnosis.cx> . A few caveats: (1) This stuff is copyrighted by AW (except the code samples which are released to the public domain).

Building Skills in Python — Building Skills in Python A Programmer’s Introduction to Python Legal Notice This work is licensed under a Creative Commons License. You are free to copy, distribute, display, and perform the work under the following conditions: Attribution. For any reuse or distribution, you must make clear to others the license terms of this work. Language Basics The Processing View A programming language involves two closely interleaved topics. This part describes the most commonly-used Python statements, sticking with basic numeric data types. Some of the examples in this part refer to the rules of various common casino games. We’ll provide a little background on Python in Background and History. In Simple Numeric Expressions and Output we’ll introduce the print statement (and print() function); we’ll use this to see the results of arithmetic expressions including the numeric data types, operators, conversions, and some built-in functions. Data Structures The Data View Expression Statement. The Other Side of the Coin. Sequences.

The Python Tutorial Python is an easy to learn, powerful programming language. It has efficient high-level data structures and a simple but effective approach to object-oriented programming. Python’s elegant syntax and dynamic typing, together with its interpreted nature, make it an ideal language for scripting and rapid application development in many areas on most platforms. The Python interpreter and the extensive standard library are freely available in source or binary form for all major platforms from the Python Web site, and may be freely distributed. The Python interpreter is easily extended with new functions and data types implemented in C or C++ (or other languages callable from C). This tutorial introduces the reader informally to the basic concepts and features of the Python language and system. For a description of standard objects and modules, see The Python Standard Library. The Glossary is also worth going through.

Python Course: Introduction into NumPy Introduction NumPy is an acronym for "Numeric Python" or "Numerical Python". It is an open source extension module for Python, which provides fast precompiled functions for mathematical and numerical routines. SciPy (Scientific Python) is often mentioned in the same breath with NumPy. Both NumPy and SciPy are usually not installed by default. (Comment: The diagram of the image on the right side is the graphical visualisation of a matrix with 14 rows and 20 columns. NumPy is based on two earlier Python modules dealing with arrays. The Python Alternative to Matlab Python in combination with Numpy, Scipy and Matplotlib can be used as a replacement for MATLAB. Comparison between Core Python and Numpy When we say "Core Python", we mean Python without any special modules, i.e. especially without NumPy. The advantages of Core Python: high-level number objects: integers, floating pointcontainers: lists with cheap insertion and append methods, dictionaries with fast lookup arange