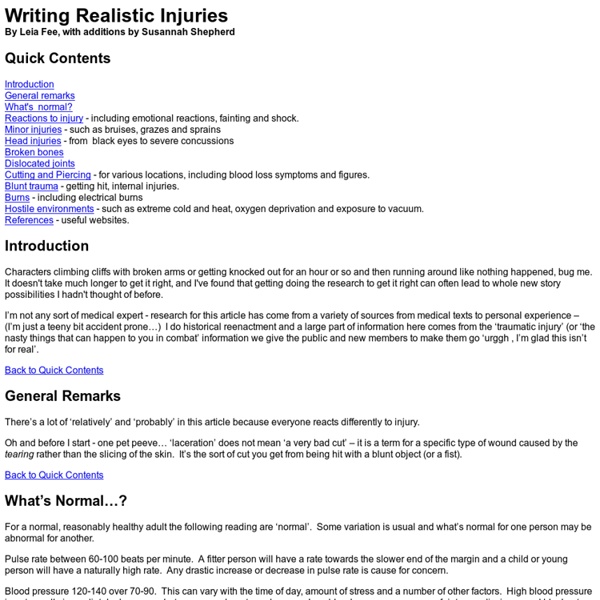 Quick Contents Introduction General remarks What's normal?Reactions to injury - including emotional reactions, fainting and shock. Minor injuries - such as bruises, grazes and sprains Head injuries - from black eyes to severe concussions Broken bones Dislocated jointsCutting and Piercing - for various locations, including blood loss symptoms and figures. Blunt trauma - getting hit, internal injuries.Burns - including electrical burns Hostile environments - such as extreme cold and heat, oxygen deprivation and exposure to vacuum. References - useful websites. Introduction Characters climbing cliffs with broken arms or getting knocked out for an hour or so and then running around like nothing happened, bug me. Back to Quick Contents General Remarks There’s a lot of ‘relatively’ and ‘probably’ in this article because everyone reacts differently to injury. What’s Normal…? For a normal, reasonably healthy adult the following reading are ‘normal’. Pulse rate between 60-100 beats per minute. Shock

First Person Point of View — The Writer’s Craft When you tell a story through a viewpoint character using I or we, you are using first person point of view. Example: The banging on my door reverberated within my skull like a giant church bell in an empty hall. I groaned and rolled onto my stomach, pulling the pillow over my head. Spice Up Your Writing With Dialogue by Judy Cullins Does your chapter sound like a report? Does it go on and on with past tense sentences that tell, rather than show? To spice up your self help, non-fiction or fiction book and even promotional writing, you need to use much more dialogue. Why? Writing Tips - Publishers list of phrases for writers to avoid We have all met people who have the extraordinary ability to talk in clichés: Y’know, not to beat around the bush or hedge your bet, this section is a must-read because it calls a spade a spade and in a nutshell leaves no stone unturned to pull the rug from under those off-the-cuff, old-hat bête noires called clichés. These are the people who’ve given the cliché its bad name. We all tend to use them, of course. Sometimes that familiar phrase is the neatest way of expressing yourself and most of us can, in a flash (cliché), unconsciously call up a few hundred of them to help us out in writing and conversation.

How to Plot and Write a Novel: Plan Your Novel Writing with the Snowflake Method Many novelists mull over story ideas, letting them ripen and develop over time. When the story is ready to be told, instead of just sitting down and starting to type, try the Snowflake Method. This step-by-step way to write a novel begins with essential elements and becomes more detailed with each step.

How to Write a Horror Story: 12 steps Adjunct Assistant Professor of English This article was co-authored by Christopher Taylor, PhD. Christopher Taylor is an Adjunct Assistant Professor of English at Austin Community College in Texas. He received his PhD in English Literature and Medieval Studies from the University of Texas at Austin in 2014. Patricia C. Wrede's Worldbuilder Questions: Index Index About This Page This page is not Patricia Wrede's web site. Eight Secrets Which Writers Won’t Tell You Image from Flickr by Lazurite This is not particularly relevant to the post, but I’m getting an awful lot of comments telling me, often a little snarkily, “it’s ‘THAT’ not ‘WHICH’”. The “don’t use which for restrictive clauses” rule comes (as far as I can tell) from Strunk and White. Plenty of authors, including Austen, have used “which” exactly as I use it in the title. It’s very commonly used like this here in England, so I’m guessing my comments are coming from US readers. There was never a period in the history of English when “which” at the beginning of a restrictive relative clause was an error.

Finding Strong Ideas for Teen Fiction Finding the right idea is the key to beginning your YA novel. So where, exactly, do ideas come from? How can you find ideas that teenagers will enjoy? The answer to this question is both simple and complex. Ideas for your teen novel can come from anywhere. That’s the simple answer. A Simple Novel Outline – 9 questions for 25 chapters « H.E. Roulo Just as every tree is different but still recognizably a tree, every story is different but contains elements that make it a story. By defining those before you begin you clarify the scope of your work, identify your themes, and create the story you meant to write. At Norwescon 2011 I sat in on a session called Outline Your Novel in 90-minutes led by Mark Teppo. I’ll give you the brief, readable, synthesized version.

CALLIHOO Writing Idea Generators: The 37 Dramatic Situations The Thirty-six (plus one) Dramatic Situations Georges Polti says that all stories boil down to just 36 dramatic situations and takeoffs of those situations. Somebody else out there added #37. 20 Common Grammar Mistakes That (Almost) Everyone Makes I’ve edited a monthly magazine for more than six years, and it’s a job that’s come with more frustration than reward. If there’s one thing I am grateful for — and it sure isn’t the pay — it’s that my work has allowed endless time to hone my craft to Louis Skolnick levels of grammar geekery. As someone who slings red ink for a living, let me tell you: grammar is an ultra-micro component in the larger picture; it lies somewhere in the final steps of the editing trail; and as such it’s an overrated quasi-irrelevancy in the creative process, perpetuated into importance primarily by bitter nerds who accumulate tweed jackets and crippling inferiority complexes. But experience has also taught me that readers, for better or worse, will approach your work with a jaundiced eye and an itch to judge. While your grammar shouldn’t be a reflection of your creative powers or writing abilities, let’s face it — it usually is. Who and Whom