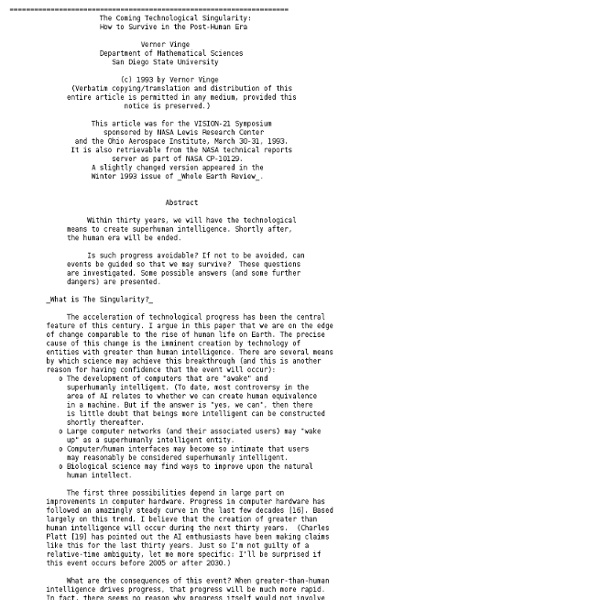 ==================================================================== The Coming Technological Singularity: How to Survive in the Post-Human Era Vernor Vinge Department of Mathematical Sciences San Diego State University (c) 1993 by Vernor Vinge (Verbatim copying/translation and distribution of this entire article is permitted in any medium, provided this notice is preserved.) This article was for the VISION-21 Symposium sponsored by NASA Lewis Research Center and the Ohio Aerospace Institute, March 30-31, 1993. It is also retrievable from the NASA technical reports server as part of NASA CP-10129. A slightly changed version appeared in the Winter 1993 issue of _Whole Earth Review_. Abstract Within thirty years, we will have the technological means to create superhuman intelligence. Shortly after, the human era will be ended.

Master monkey's brain controls sedated 'avatar' 18 February 2014Last updated at 11:35 ET By James Gallagher Health and science reporter, BBC News The brain of one monkey has been used to control the movements of another, "avatar", monkey, US scientists report. Brain scans read the master monkey's mind and were used to electrically stimulate the avatar's spinal cord, resulting in controlled movement.

Three Major Singularity Schools : The Singularity Institute Blog I’ve noticed that Singularity discussions seem to be splitting up into three major schools of thought: Accelerating Change, the Event Horizon, and the Intelligence Explosion. Accelerating Change:Core claim: Our intuitions about change are linear; we expect roughly as much change as has occurred in the past over our own lifetimes. But technological change feeds on itself, and therefore accelerates. Change today is faster than it was 500 years ago, which in turn is faster than it was 5000 years ago. Vernor Vinge on the Singularity Vernor Vinge Department of Mathematical Sciences San Diego State University (c) 1993 by Vernor Vinge (This article may be reproduced for noncommercial purposes if it is copied in its entirety, including this notice.) The original version of this article was presented at the VISION-21 Symposium sponsored by NASA Lewis Research Center and the Ohio Aerospace Institute, March 30-31, 1993. A slightly changed version appeared in the Winter 1993 issue of Whole Earth Review. Within thirty years, we will have the technological means to create superhuman intelligence. Shortly after, the human era will be ended.

77 Brain Hacks to Learn Faster, Deeper, and Better Source: Online Education Database If someone granted you one wish, what do you imagine you would want out of life that you haven't gotten yet? For many people, it would be self-improvement and knowledge. New knowledge is the backbone of society's progress. Singularity Summit at Stanford An Annual Conference onScience, Technology, and the Future The Singularity Summit is an annual conference on science, technology, and the future co-produced by MIRI and Singularity University. Topics explored include artificial intelligence, brain-computer interfaces, the Singularity, robotics, regenerative medicine, and big picture issues on the trajectory of human civilization. Each year, about 25 eminent speakers share their latest views over the course of two days.

Singularity Hypotheses: A Scientific and Philosophical Assessment What is the Singularity? Existential risk or cultist fantasy? Rapture of the nerds? Spooky Physics Phenomenon May Link Universe's Wormholes Wormholes — shortcuts that in theory can connect distant points in the universe — might be linked with the spooky phenomenon of quantum entanglement, where the behavior of particles can be connected regardless of distance, researchers say. These findings could help scientists explain the universe from its very smallest to its biggest scales. Scientists have long sought to develop a theory that can describe how the cosmos works in its entirety. Currently, researchers have two disparate theories, quantum mechanics and general relativity, which can respectively mostly explain the universe on its tiniest scales and its largest scales. There are currently several competing theories seeking to reconcile the pair. One prediction of the theory of general relativity devised by Einstein involves wormholes, formally known as Einstein-Rosen bridges.

The brain’s silent majority - 2009 FALL When you have no clue, call it glue. “Glia,” the Greek word for glue, was the name the pathologist Rudolph Virchow gave, back in 1856, to the gelatinous substance that forms the bulk of the brain. And it stuck. Alvin Toffler Alvin Toffler (born October 4, 1928) is an American writer and futurist, known for his works discussing the digital revolution, communication revolution and technological singularity. He founded Toffler Associates, a management consulting company, and was a visiting scholar at the Russell Sage Foundation, visiting professor at Cornell University, faculty member of the New School for Social Research, a White House correspondent, an editor of Fortune magazine, and a business consultant.[3] Toffler is married to Heidi Toffler, also a writer and futurist. They live in the Bel Air section of Los Angeles, California, just north of Sunset Boulevard. The couple’s only child, Karen Toffler, (1954–2000), died at the age of 46 after more than a decade suffering from Guillain–Barré syndrome.[4][5]

New Methods in Nonperturbative Quantum Field Theory Quantum field theory has been the fundamental framework of quantum physics for well over half a century, but many open questions remain about its behavior at strongly coupling. In recent years new methods have arisen to address this. The purpose of this program is to develop these methods and the connections between them. Questions of interest include general constraints on renormalization flows, such as monotonicity, and their relation with entanglement entropy; conformal correlation functions and bootstrap methods; the conformal window in four dimensional gauge theories and the application of conformal theories to model building; exact results in supersymmetric theories, by localization and other methods; relations between field theories in different dimensions; connections with integrability; higher spin gravity theories, and their holographic connection with CFTs. Some big questions are: Can gauge/gravity duality be derived, for example from the renormalization group?

untitled WHY PEOPLE THINK COMPUTERS CAN'T Marvin Minsky, MIT First published in AI Magazine, vol. 3 no. 4, Fall 1982. Reprinted in Technology Review, Nov/Dec 1983, and in The Computer Culture, (Donnelly, Ed.) Associated Univ. Presses, Cranbury NJ, 1985 Most people think computers will never be able to think. scientists put free text-analysis tool on the web Now anyone can drag and drop text into a linguistic analysis tool powered by machine learning. By Andrew Myers and Tom Abate Ever wondered whether a certain TV show had a slant in favor of a political candidate? Stanford computer scientists have created a website that gives anyone who can cut and paste the ability to answer such questions, systematically and for free. The website is known as etcML, short for Easy Text Classification with Machine Learning.