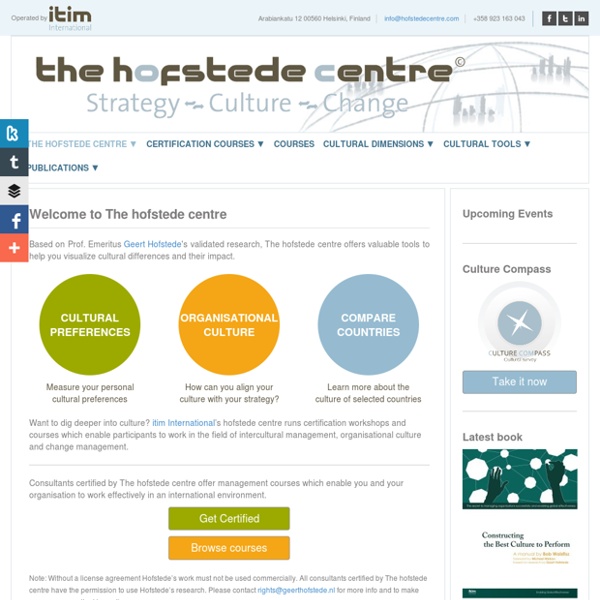 Want to dig deeper into culture? The Hofstede Centre and its partners offer a wide variety of courses. In addition, you can find links to recommended books and products about culture, our facebook page and info about The Hofstede Centre itself. This website provides you with insights in Hofstede's research and the research of his colleagues into national and organisational culture. Besides the research outcomes, such as country scores on the dimensions of national culture, you will find an online survey to determine your personal score on Hofstede's dimensions, mobile applications for the same purpose, video clips and much more! This website uses copyrighted information from Professor Geert Hofstede's books, for which The Hofstede Centre has been licensed by Professor Hofstede.

National Culture About the research Professor Geert Hofstede conducted one of the most comprehensive studies of how values in the workplace are influenced by culture. He analysed a large database of employee value scores collected within IBM between 1967 and 1973. Cultural Dimensions - Geert Hofstede Geert Hofstede’s scientific innovation, the dimension concept Geert Hofstede has defined “culture” as “the collective programming of the mind that distinguishes the members of one group or category of people from others”. In 1980 he published his book “Culture’s Consequences: International Differences in Work-Related Values”. As the title suggests, this book was entirely devoted to the study of culture at the national level, in which values played a major role. The book’s main innovation was its use of the concept (paradigm) of dimensions of culture: basic problems to which different national societies have over time developed different answers.

Hofstede's Cultural Dimensions - Leadership Training from MindTools Understanding Workplace Values Around the World Learn how to be more sensitive to the needs of people in different cultures. We know that we are living in a global age. Technology has brought everyone much closer together. This means that people of different cultures find themselves working together and communicating more and more. Terms & Conditions - tradorax - Binary Options These Terms of Use govern the Client’s use of the Company Internet Website and all applications, software and Services (collectively, “The Services”) available via this Website. Use of the Website By accessing this Website, the client signifies his agreement with and understanding of the following Terms of Use. The client warrants and represents to the Company that he is legally entitled to visit the Website and make use of information made available via the Website.

The 4Ss of Note-Taking With Technology Recently, a number of articles have surfaced reporting the ineffectiveness of note taking with laptops, in keeping with the findings of Pam Mueller and Daniel Oppenheimer detailed in The Pen Is Mightier Than the Keyboard. These authors assert that when students used laptops in lecture courses, they transcribed notes rather than synthesized information. As a result, those students then performed poorly on cognitively demanding tasks. However, before making a blanket statement that one device may be better than another (e.g. pen vs. laptop) or calling into question what may be the best note-taking system, what if we approach the concept by identifying what is best for individual students? In other words, does the system . . . Adequately support the students' learning needs?

Germany - Geert Hofstede If we explore the German culture through the lens of the 6-D Model©, we can get a good overview of the deep drivers of German culture relative to other world cultures. Power DistanceThis dimension deals with the fact that all individuals in societies are not equal – it expresses the attitude of the culture towards these inequalities amongst us. Power Distance is defined as the extent to which the less powerful members of institutions and organisations within a country expect and accept that power is distributed unequally. Highly decentralised and supported by a strong middle class, Germany is not surprisingly among the lower power distant countries (score 35). Co-determination rights are comparatively extensive and have to be taken into account by the management. A direct and participative communication and meeting style is common, control is disliked and leadership is challenged to show expertise and best accepted when it’s based on it.

Hofstede's cultural dimensions theory Overview[edit] Hofstede's cultural dimensions theory is a framework for cross-cultural communication. Hofstede developed his original model as a result of using factor analysis to examine the results of a world-wide survey of employee values by IBM in the 1960s and 1970s. The theory was one of the first that could be quantified, and could be used to explain observed differences between cultures. The original theory proposed four dimensions along which cultural values could be analyzed: individualism-collectivism; uncertainty avoidance; power distance (strength of social hierarchy) and masculinity-femininity (task orientation versus person-orientation). Forex Trading: A Beginner's Guide Forex is short for foreign exchange, but the actual asset class we are referring to is currencies. Foreign exchange is the act of changing one country's currency into another country's currency for a variety of reasons, usually for tourism or commerce. Due to the fact that business is global there is a need to transact with most other countries in their own particular currency. After the accord at Bretton Woods in 1971, when currencies were allowed to float freely against one another, the values of individual currencies have varied, which has given rise to the need for foreign exchange services.

3 Things You Didn’t Know About Microsoft Excel Are you utilizing Microsoft Excel to its fullest? Here are three things you might not have known Excel could do: Sparklines With Sparklines in Excel 2013, you are able to provide a more in-depth view of the data other than just simply using the numbers. Use Sparklines to show trends such as increases and decreases or economic cycles.