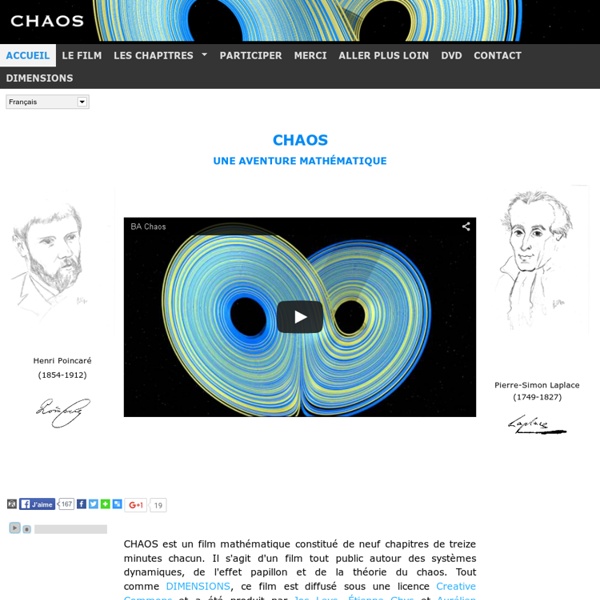 40 maps that explain the world By Max Fisher By Max Fisher August 12, 2013 Maps can be a remarkably powerful tool for understanding the world and how it works, but they show only what you ask them to. So when we saw a post sweeping the Web titled "40 maps they didn't teach you in school," one of which happens to be a WorldViews original, I thought we might be able to contribute our own collection. Welcome to Space Math @ NASA ! On July 5, 2016 the Juno spacecraft entered orbit around the giant planet Jupiter. Here are a few resources that feature this historic event! More will follow as its exciting science data is released Master 2 Mathématiques Fondamentales et Applications. TOULOUSE. Bienvenue sur la page du Master 2 Recherche Welcome on the Master 2 Research home page Contacts: For any information you may contact by e-mail one of the three following teachers in charge, choosing the one whose domain of activities seems to be the most suitable

A Famous Steve Jobs Speech Is Hidden on Your Mac Every Mac which has the Pages app for OS X installed includes a little Easter Egg that few know about; a famous Steve Jobs speech, tucked away in a little unassuming folder. Technically, it’s two different Steve Jobs speeches, the famous text from the Crazy Ones Think Different campaign, and arguably the even more famous 2005 Steve Jobs commencement speech from Stanford University. Note that you must have Pages.app installed in OS X to find the Easter Egg file, Pages is free as part of the iWork suite nowadays on new Macs, and older versions can upgrade to the latest versions for free. The file exists in the newest version of Pages and presumably older versions as well. Selecting the file and hitting spacebar will show the full Easter Egg in Quick Look: There may be a way to access the speech somewhere from the Pages app without launching it directly or accessing it through the apps Resources folder, if you know of one let us know in the comments.

Get Started Three Steps to Get Started OLI’s aim is to combine free, high-quality courses, continuous feedback, and research to improve learning and transform higher education. If you’re ready to check out OLI for yourself, get started in three easy steps. STEP 1Request an Instructor Account You will need to sign up for an instructor account. Once you fill out the form, we will confirm your account via email within two business days.

On the Viability of Conspiratorial Beliefs Abstract Conspiratorial ideation is the tendency of individuals to believe that events and power relations are secretly manipulated by certain clandestine groups and organisations. Many of these ostensibly explanatory conjectures are non-falsifiable, lacking in evidence or demonstrably false, yet public acceptance remains high. The Beauty of Mathematics: A Visual Demonstration of Math in Everyday Life This lovely video short from Yann Pineill and Nicolas Lefaucheux of Paris video production agency Parachutes succinctly demonstrates the underlying mathematics behind everyday occurrences in the format of a triptych. On the left we see the mathematical equation, in the middle a mathematical model, and on the right a video of such things as snowflakes, wind, sound, trees and magnetism. The video begins with the following quote:

Forbidden acts never justified by “goodness” of intention The Fatwa on Terrorism & Suicide Bombings deals comprehensively with the core arguments that terrorists use and their tendencies to misuse Islamic teachings to defend their wrong actions. The Fatwa on Terrorism contains clear-cut rebuttals of the standard arguments made by the terrorists and goes as far as declaring those who commit terrorist acts disbelievers. The Fatwa on Terrorism clearly explains how terrorists such as the likes of Mujaahid Abu Hamza and Ismail Ibn Abdullah (formerly Michael Adebolajo and Michael Adebowale) have nothing to do with Islam or its peaceful teachings nor can their actions be defended by using any verses of the Qur’an. The Fatwa instead declares people of their persuasion and their sympathisers as the modern day “Kharijites”, a deviant and heretical sect which came to being soon after the Prophet of Islam (saw), and which the Prophet (saw) foretold would rise again and again in future times, and provides numerous evidences in proof of this. “(O Muslims!)

Partition Function P , sometimes also denoted (Abramowitz and Stegun 1972, p. 825; Comtet 1974, p. 94; Hardy and Wright 1979, p. 273; Conway and Guy 1996, p. 94; Andrews 1998, p. 1), gives the number of ways of writing the integer as a sum of positive integers, where the order of addends is not considered significant. By convention, partitions are usually ordered from largest to smallest (Skiena 1990, p. 51). For example, since 4 can be written Events, ENQA (Qualité de l'ESR en Europe) If you are interested in hosting an ENQA event, please see the Guidance. 9th ENQA Training of Agency Reviewers (FULL) The 9th ENQA Training of Agency Reviewers will take place on 12-13 May 2014 in Bern, Switzerland. The training session is organised by ENQA and hosted by the Swiss Center of Accreditation and Quality Assurance in Higher Education (OAQ).