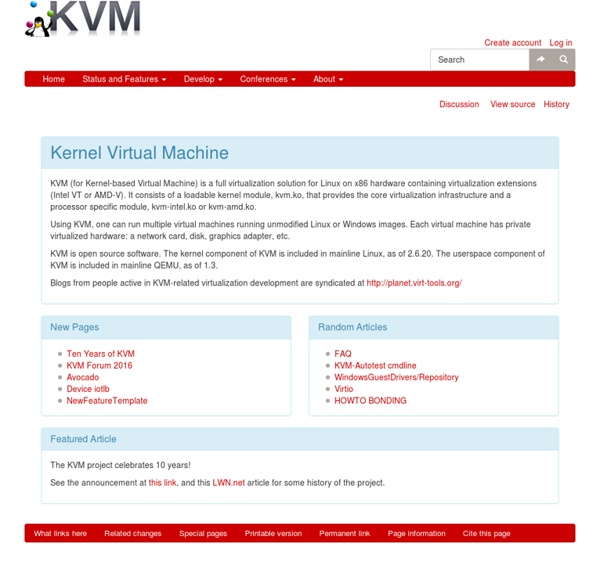 Apache HTTP Server The Apache HTTP Server, colloquially called Apache (/əˈpætʃiː/ ə-PA-chee), is the world's most used web server software. Originally based on the NCSA HTTPd server, development of Apache began in early 1995 after work on the NCSA code stalled. Apache played a key role in the initial growth of the World Wide Web,[5] quickly overtaking NCSA HTTPd as the dominant HTTP server, and has remained most popular since April 1996. In 2009, it became the first web server software to serve more than 100 million websites.[6] Apache is developed and maintained by an open community of developers under the auspices of the Apache Software Foundation. As of July 2016[update], Apache was estimated to serve 46.41% of all active websites and 43.18% of the top million websites.[10] Name[edit] The name literally came out of the blue. Feature overview[edit] Apache supports a variety of features, many implemented as compiled modules which extend the core functionality. HTTP server and proxy features[edit]

The Fat Bloke Sings Oracle has just released Oracle Virtual Desktop Infrastructure version 3.5, a major new release which introduces some great new features, but also allows a VDI deployment that can start with a single server, yet scale to the Enterprise. Here's a quick review of some of these features: Single Server to the Enterprise For too long, the notion of VDI, or server-hosted virtual desktops, has been held back by the perceived high entry cost of the hardware needed to support it. It is assumed that virtualization requires both x86 servers and specialized ( i.e. "expensive" ) shared storage on which to hold the virtual machines. And the architecture is powerful enough such that, to expand capacity you can simply add more servers, or, as your deployment grows, plug-in shared storage devices too. So it's easy to get started, and easy to grow, but can it scale to the Enterprise, because Enterprise-scale deployments need Enterprise-scale tools, right? Oracle Enterprise Manager 12c is such a tool. Enjoy,

HOWTO: Virtual Raspbian on Qemu in Ubuntu Linux 12.10 How to chroot RPI envoronment. Keep in mind this took me so many hours to figure out it's not even funny. I'm not exactly a nix guru by any means of the word. The 1st part sucks as it is how you get the img ready. There are two ways to do it but I found it easier just to do it this way. The hard way is to use gemu to expand the img file and then some fancy fdisk stuff in the image to expand. My Way: I do this part all in windows so if you're a linux user you will need to know how to do dd and other linuxy things. Download the latest Raspbian 2013-02-09-wheezy-raspbian.img from unzip it. Write to your SD Card [8 gig is plenty ] I use win32diskimager Once completed insert SD into your RPI and boot it. Run through initial setup screen paying attention to the "expand rootfs" as this one is really the only one of two parts that matter. Exit and reboot log in !!

About the Apache HTTP Server Project - The Apache HTTP Server Pr The Apache HTTP Server Project is a collaborative software development effort aimed at creating a robust, commercial-grade, featureful, and freely-available source code implementation of an HTTP (Web) server. The project is jointly managed by a group of volunteers located around the world, using the Internet and the Web to communicate, plan, and develop the server and its related documentation. This project is part of the Apache Software Foundation. In addition, hundreds of users have contributed ideas, code, and documentation to the project. This file is intended to briefly describe the history of the Apache HTTP Server and recognize the many contributors. In February of 1995, the most popular server software on the Web was the public domain HTTP daemon developed by Rob McCool at the National Center for Supercomputing Applications, University of Illinois, Urbana-Champaign. Brian BehlendorfRoy T. with additional contributions from Eric HagbergFrank PetersNicolas Pioch

Converting a virtual machine from VirtualBox to KVM | Chez Nick VirtualBox has been great for me, but I thought I'd give KVM/qemu a try. I'd tried running Bochs around 2003 and it was exciting to see that it actually worked, but the poor performance made it more of a novelty than a useful tool. It's nice to see how far Qemu it's come in this time. Some people report better performance using KVM. The VM I converted was my Oracle test host which runs CentOS. Be sure to use full path names if you don't want your disk images to end up in ~/.VirtualBox/HardDisks/ Typically in Unix output filenames are going to drop out in the current directory if the full path isn't given. KVM can read raw files, but it can also read Qemu's qcow2 compressed format, so you can save disk space by converting the raw image using qemu-img: qemu-img convert -f raw hard_drive_image.img -O qcow2 hard_drive_image.qcow2 Just because you have KVM in the kernel doesn't mean you have the qemu utilities installed, so install them using your distro's application management system.

Oracle VM VirtualBox The Case For Low-Cost, Low-Power Servers The Conference on Innovative Data Systems Research was held last week at Asilomar California. It’s a biennial systems conference. At the last CIDR, two years ago, I wrote up Architecture for Modular Data Centers where I argued that containerized data centers are an excellent way to increase the pace of innovation in data center power and mechanical systems and are also a good way to grow data centers more cost effectively with a smaller increment of growth. Containers have both supporters and detractors and its probably fair to say that the jury is still out. One of the arguments that I made in the Architecture for Modular Systems paper was that a fail-in-place might be the right approach to server deployment. Fail in place (Service Free Systems) was by far the most debated part of the modular datacenter work. In this work, we took an existing very high scale web property (many thousands of servers) and ran their production workload on the existing servers currently in use.

Reed's Ruminations: A Blog by Dan Reed Servers With Cellphone Chips? Yep, Here They Come - Bits Blog - If a server runs on a smartphone chip is it still a server? The era of such a deeply philosophical data center question is upon us. A pair of stealthy start-ups have placed smartphone chips at the center of their plans to create a new breed of low-power servers. They’re hoping that this radical take on data center hardware will attract the likes of Google, Facebook and Microsoft, which all battle energy costs on a huge scale. SeaMicro, based in Santa Clara, Calif., has put together a server based on Intel‘s Atom chip, which currently slots into things like netbooks and other mobile computing devices. Exact details on the SeaMicro product have been tough to come by, since the company remains inside the cone of silence, but people familiar with SeaMicro’s hardware say it will pack about 80 Atom chips in a very small chassis. The vast majority of servers sold today run on Intel’s Xeon chip, which is the company’s top-of-the-line mainstream product.

SeaMicro: More Than Just Low-Power Servers « Data Center Knowled Stealthy startup SeaMicro isn’t saying much about its technology, which aims to “revolutionize the data center landscape” by slashing the power used in IT operations. The company recently got a $9.3 million grant from the U.S. Department of Energy to further its development of technology to make data centers more energy efficient. The initial buzz around SeaMicro has focused on its plans to build powerful multi-core servers using Intel’s low-power Atom chips, whose energy efficiency has made them the processor of choice for many mobile phones and laptops. “The integrated hardware and software design project ensures that the energy consumed within the server is efficiently used regardless of whether the CPUs are hard at work or in ‘sleep’ mode,” the DOE notes in its description of the project. ‘Complex Datacenter Appliance’ But SeaMicro’s secret sauce extends beyond the server. The inventors cited in the patents are SeaMicro CTO Gary Lauterbach and founder/vice president Anil Rao.

Lenovo delays ARM-based netbook? Top 10 endpoint backup mistakes Lenovo may have delayed its eagerly anticipated ARM-based netbook, the Skylight, it has been claimed. Originally scheduled to appear on US shop shelves this month, the mini notebook will not now debut until July, transatlantic title Laptop Magazine has alleged, citing moles from within Lenovo. Lenovo's Skylight: delayed? They said the company is taking a "little extra time... to get [the Skylight] right". The Lenovo website still says the machine will arrive in "Spring 2010". Unfortunately, Lenovo has yet to say when - or if, even - the Skylight will be released in the UK, but a three-month slip in the company's launch market means the ARM-book's appearance over here is now even further off. Skylight sports a netbook-style 10.1in display but with a 1280 x 720 resolution. Very thin for easy portability Skylight weighs in at 900g and measures a skinny 253 x 201 x 17mm. Top 10 endpoint backup mistakes

Apple Considering $8 Billion Acquisition of ARM [RUMOR] ARM Holdings, the company that creates the processors for most of the world's mobile phones — including the iPhone and iPad — is now the center of major acquisition rumors. The potential buyer: none other than Apple. According to the London Evening Standard, there is huge chatter in London's financial scene that ARM Holdings could be acquired by the technology giant for around $8 billion, or 5.2 billion pounds. Let's be very clear: This is very much in the rumors and speculation stage. However, shares of ARM Holdings shot up by over 8% during trading today, mostly due to the rumors. The deal is completely doable on Apple's end — it has over $40 billion in cash reserves. An acquisition would do two things for Apple. If Apple does indeed acquire ARM, it would completely change the game and potentially force mobile phone manufacturers to use weaker-performing processors in their phones. For now, file this one under the "plausible rumor" category.