Something Other or More

Hump Day Tuneage. By the subway philosopher™ On occasion, celebrating the midweek hump with a meticulously curated selection of the most disrespectful, impolite, disgraceful, badass, head-banging, disturbing, irreverent, rebellious, most enjoyable rock n roll of its time feels like a perfectly responsible thing to do, for some reason. 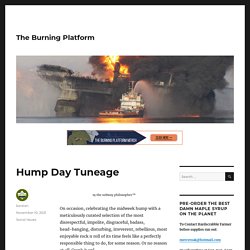 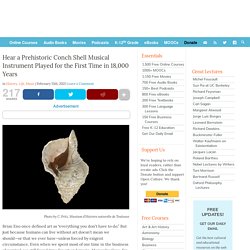 Fritz, Muséum d’Histoire naturelle de Toulouse Brian Eno once defined art as “everything you don’t have to do.” Experience Blade Runner Like You Never Have Before Through a Feature-Length Remastered Soundtrack. There is no one Blade Runner. 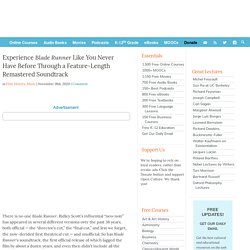 Ridley Scott’s influential “neo-noir” has appeared in several different versions over the past 38 years, both official — the “director’s cut,” the “final cut,” and lest we forget, the now-derided first theatrical cut — and unofficial. So has Blade Runner‘s soundtrack, the first official release of which lagged the film by about a dozen years, and even then didn’t include all the music so integral to the unprecedented aesthetic richness of the futuristic setting. Blondie to The Clash: 20 greatest punk covers of all time. There’s something truly special about a punk band deconstructing a previously adored song and turning it into a grime-filled, riff-laden, pogo-inducing anthem. 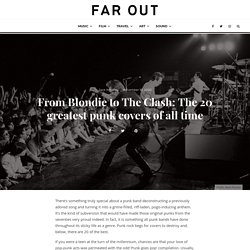 It’s the kind of subversion that would have made those original punks from the seventies very proud indeed. In fact, it is something all punk bands have done throughout its sticky life as a genre. Punk rock begs for covers to destroy and, below, there are 20 of the best. (1) Julee Cruise - Rockin' Back Inside My Heart. (1) YOUR GIRL JULEE CRUISE & DJ DIMITRY. IronViz - The Day the Music Died. 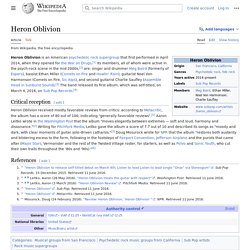 "[2] Writing for Pitchfork Media, Leitko gave the album a score of 7.7 out of 10 and described its songs as "moody and dark, with clear moments of guitar solo-driven catharsis. "[3] Doug Mosurock wrote for NPR that the album "restores both austerity and blistering excess to the form, following in the footsteps of Fairport Convention, Jefferson Airplane and the purists that came after (Major Stars, Vermonster and the rest of the Twisted Village roster, for starters, as well as Polvo and Sonic Youth, who cut their own trails throughout the '80s and '90s) References[edit] Gary Numan's "Cars" Sounds Perfect Played on Floppy Drives. Theconversation. Plenty of research has looked at adults’ emotional responses to music. 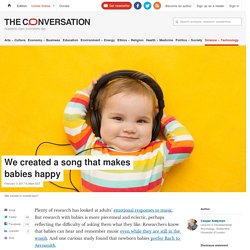 But research with babies is more piecemeal and eclectic, perhaps reflecting the difficulty of asking them what they like. Researchers know that babies can hear and remember music even while they are still in the womb. And one curious study found that newborn babies prefer Bach to Aerosmith. Most systematic work has found young babies have clear preferences for consonance over dissonance and can remember the tempo and timbre of music they’ve heard before. Coolmaterial. It’s no real secret that popular radio stations just ain’t what they used to be. 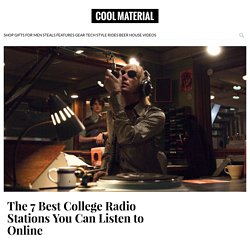 Unless you’re into Top 40, “Soft Country,” or hearing the same Drake, Kanye West, or Beyonce songs over and over and over again, mainstream radio stations leave a lot to be desired. If you’re not yet ready to switch over to a streaming service, or still want to discover new music the old fashioned way, you’re going to have to search the dial pretty thoroughly to find out which local stations offer the best alternatives. We love college radio because they care less about advertisers and more about quality programming.

In fact, we’d happily argue that lower-band college stations are broadcasting some of the best radio waves in the country right now, and we did the research to prove it. Here are the top 7 college radio stations in the country that you can stream online right now. 1963 - The Barbra Streisand Album - 1. Cry Me a River. Every Movie Ending Is Improved By That One Stupid Dire Straits Song. Rosamund Pike Stars in Massive Attack Music Video. By Zack Sharf | Indiewire February 23, 2016 at 11:15AM We need to see this intense side of Pike on the big screen as soon as possible. 00000153-0eda-dabd-a957-9ffa1a600000 It was only a year ago when Rosamund Pike was touring the awards season circuit and receiving countless Best Actress nominations for her malicious turn in "Gone Girl," and we've been waiting patiently ever since to see the British beauty deliver another knockout on the big screen. 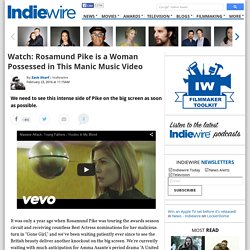 We're currently waiting with much anticipation for Amma Asante's period drama "A United Kingdom," in which she plays the wife of Botswana's first president (played by David Oyelowo), but a new music video has arrived to hold us over just a bit longer. Alanis Morissette - Everything (Video) Untitled. Please Subscribe to 3QD If you would like to make a one time donation in any amount, please do so by clicking the "Pay Now" button below. 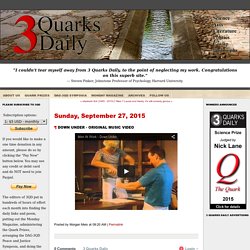 You may use any credit or debit card and do NOT need to join Paypal. The editors of 3QD put in hundreds of hours of effort each month into finding the daily links and poem, putting out the Monday Magazine, administering the Quark Prizes, arranging the DAG-3QD Peace and Justice Symposia, and doing the massive amount of behind-the-scenes work which goes into running the site. She's Leaving Home- The Beatles. Mick Taylor & Jack Bruce - Morning Story. Mick Taylor & Jack Bruce - Keep It Down. Mick Taylor & Jack Bruce - One. Jack Bruce complete Swing In 1971. JACK BRUCE - ONLY PLAYING GAMES. Neko Case and the Abolition of Plasticized Music. It may be a tired complaint, that the baseline norm for musicians today is to be a multi-media package creation. 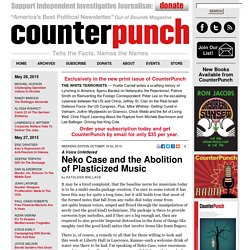 I’m sure to some extent it has been this way for quite a long time, but it still holds true that most of the formed notes that fall from any radio dial today come from not-quite human voices, amped and flexed through the manipulation of nerdy (not the good kind) technicians. The package is there to provide earworm type melodies, and if they are a big enough act, then are required to also provide Imperial distraction in the form of things like naughty (not the good kind) antics that involve items like foam fingers.

There is, of course, a remedy to all that for those willing to look and this week at Liberty Hall in Lawrence, Kansas–such a welcome drink of water was there to be had. I’m speaking of Neko Case, voice enormous enough to envelop all needs, even ones you didn’t know that you had. Video: synthesized Sinatra. Peter Baumann, formerly of Tangerine Dream, plays Sinatra's "Strangers in the Night" in this exemplary 1980s video. (via Synthtopia, thanks Dustin Hostetler!) BORIS - Korosu. Jenny Lewis - Handle WIth Care (Live) Slim Whitman,I remember you. Slim Whitman - Indian Love Call. Bookends - Simon and Garfunkel HQ.

That person happened to be Dan "The Automator" Nakamura, the hot-shot producer known to pop and hip-hop fans for his work with Gorillaz and Del the Funky Homosapien. Madworld (Digital Only) by Madeline Puckette. Shades of Cool: 12 of Lana Del Rey's Biggest Influences Pictures. Slim Whitman - Indian Love Call. Lana Del Rey 'Ultraviolence' Album Review. Three years ago, Lana Del Rey seemed to hatch into existence as a fully formed provocateur: She has introduced previously untasted flavors to pop music (her slow, torchy genre of choice might best be described as "Calvin Klein Eternity commercial") and shaped herself into as crafty a video star as Lady Gaga, making her racy, mysterious clips a core part of her brand.

Using vintage references like they were bargain-bin lipsticks, she's been called an idiot and a savant. The fact that nobody has been able to verify which camp she belongs to – added to her outsize influence on stars like Lorde and Miley Cyrus – makes her one of the most compelling performers of our time. 10 musicians influenced by Bob Dylan who are better than Bob Dylan. Bob Dylan may be the most overrated performer in the history of popular music.

This is especially impressive since he’s often great; a talented songwriter with a quick wit and (at least early in his career) an ability to assimilate diverse styles without compromising his own vision. These strengths, though, were accompanied by real weaknesses. As a singer, he mimicked the roughness of roots sources without capturing their nuance or power, often resulting in self-parody. As a lyricist, he had a tendency to mistake Beat poet doggerel bathos for profundity. Vashti bunyan. Mark Mothersbaugh Looks Back at 9 Classic Devo Videos Pictures - The Complete Truth. Dean Martin - Houston. Cat Power - Fortunate Son. The Dirty Mac - Yer Blues. The Dirty Mac - Whole Lotta Yoko. The 22 best duets of all time. According to Scientists, This is The Most Relaxing Tune Ever Recorded. This eight minute relaxing tune is a beautiful combination of arranged harmonies, rhythms and bass lines and thus helps to slow the heart rate, reduce blood pressure and lower levels of the stress.

The song features guitar, piano and electronic samples of natural soundscapes. A study was conducted on 40 women, who were connected to sensors and had been given challenging puzzles to complete against the clock in order to induce a level of stress. Different songs were then played, to test their heart rate, blood pressure, breathing and brain activity. The results showed that the song Weightless was 11 per cent more relaxing than any other song and even caused drowsiness among women in the lab. It induced a 65 per cent reduction in overall anxiety and brought them to a level 35 per cent lower than their usual resting rates.

Pitchfork Media's argued that, in contrast to The Knife's "plasticky percussions and goofy synth sounds", Fever Ray "brims with fragile, more finely articulated sounds" and "moves at roughly the same pace and with the same general tone, rendering some of the songs indistinguishable at first, but committed listens will reveal this to be as nuanced and as rich of a production as anything either Dreijer has done. This Album was Recorded under the Influence of Sahlep: Aphrodite's Child's 666. Aphrodite's Child were a Greek progressive rock band formed by the iconic film composer Vangelis in 1967, featuring Demis Roussos on bass and vocals, Loukas Sideras on drums and vocals, and Anargyros Koulouris on guitar.

In 1972, they released 666 (The Apocalypse of John, 13/18), a sprawling, magnificent, and occasionally bonkers double concept album based on every rocker/stoner/teenage boy's favorite section of the Bible. First Listen: David Byrne & St. Vincent, 'Love This Giant' First Listen: Cat Power, 'Sun' Julee Cruise - Rockin' Back Inside My Heart. Karin Dreijer Andersson.