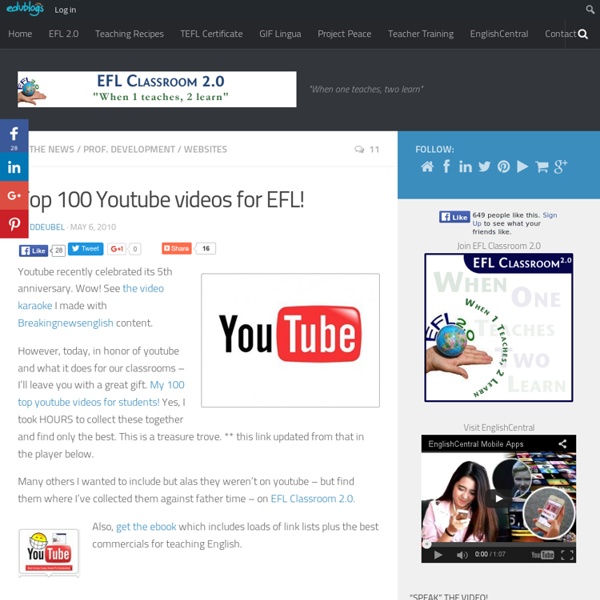 Youtube recently celebrated its 5th anniversary. Wow! See the video karaoke I made with Breakingnewsenglish content. However, today, in honor of youtube and what it does for our classrooms – I’ll leave you with a great gift. My 100 top youtube videos for students! Many others I wanted to include but alas they weren’t on youtube – but find them where I’ve collected them against father time – on EFL Classroom 2.0. Also, get the ebook which includes loads of link lists plus the best commercials for teaching English. If you liked this post – you might also like The Best Commercials for the EFL Classroom. Related:  Clips for the classroom

explore educational challenges Among explore's founding principles are “Share What You Know” and “Never Stop Learning.” The films profile issues facing the environment, education, human rights, public health, philosophy, animal welfare, spirituality, and disabilities. The lesson plans accompanying explore’s films are written for use in the K – 12 classroom and are connected to grade level national standards. Background information about the non-profit organizations is provided along with questions for guided discussion about the films. The questions are intended for students to connect to the people and issues profiled by exploring and developing their own viewpoints and opinions. Enjoy exploring the minds of the people who will solve many of the issues profiled in these films.

Watch Free Online Documentary Films and Free Documentaries | FreeDocumentaries.Org Watch Free Documentaries Online | Documentary Heaven | Viral Videos for English Language Teaching Short Films | The Best Short Films Free 18 Animations of Classic Literary Works: From Plato and Shakespeare, to Kafka, Hemingway and Gaiman Yesterday we featured Piotr Dumala's 2000 animation of Fyodor Dostoyevsky’s classic novel, Crime and Punishment, and it reminded us of many other literary works that have been wonderfully re-imagined by animators -- many that we've featured here over the years. Rather than leaving these wondrous works buried in the archives, we're bringing them back and putting them all on display. And what better place to start than with a foundational text -- Plato's Republic. We were tempted to show you a claymation version of the seminal philosophical work (watch here), but we decided to go instead with Orson Welles' 1973 narration of The Cave Allegory, which features the surreal artistic work of Dick Oden. Staying with the Greeks for another moment ... Eight years before Piotr Dumala tackled Dostoyevsky’s Crime and Punishment, Dumala produced a short animated film based on The Diaries of Franz Kafka. Emily Dickinson's poetry is widely celebrated for its beauty and originality. E.B.

Mexican doodles I never had a class that didn’t ask if I wear a kilt when I am in my country. I wonder if Mexican teachers working away from home get asked the same thing about sombreros. This is a silly game that I remember from my childhood. Language level: Beginner (A1)Learner type: Young learners; Teens; AdultsTime: 20 minutesActivity: Grammar drillTopic: StereotypesLanguage: Noun phrases (with the –ing form of the verb)Materials: None Mexican doodles [downloaded 2613 times] Lesson plan outline Language introduction: One by one, draw the following 8 pictures on the board and in each case, ask: What’s this? Tell students the answers as you go along and drill pronunciation of all the structures. a. Receptive stage: Clean the board. Note that despite the importance of noun phrases in language, traditional learner grammars sometimes forget about them (sentences, on the other hand, are never forgotten). Follow ups Ask students if they can invent their own similar pictures.

Forget John Lewis, this is the saddest Christmas ad you'll ever see | Business Handkerchiefs at the ready: the German supermarket chain Edeka has aired a Christmas ad that could top John Lewis’s “Man on the Moon” as this season’s biggest tear-jerker. In the ad, which has been viewed on YouTube almost 10m times, a lonely old man comes up with drastic measures to bring his family together: he fakes his own death. It starts with the man, played by British actor Arthur Nightingale, receiving a voicemail from his daughter telling him that, once again, the family won’t make it home for Christmas. He sits alone at the dinner table, enduring yet another lonely Christmas. In the next scene, his children, all busy in daily life, get the news that their father has died. They all meet at their father’s house, grieving and dressed in black, but to their astonishment find the table set for dinner and their father, obviously alive, emerging from the kitchen.

Video for the English classroom For the language teacher, YouTube may be nothing less than one of the best sources of material the classroom has ever seen. In this article, I would like to share 12 clips that I have used in my own classroom. I hope that each clip will be representative of a type of video that may be of particular interest to language teachers. Note: In this article, we will be examining a number of clips that are hosted on the video-sharing site YouTube. 1. Some poems are best appreciated when they are heard rather than read. For language teachers, a visual element increases the possibilities for using any text in the classroom. 2. This is an example of ‘kinetic typography’ – the technical name for a moving text. Note how the text bombards the eyes in a range of orientations, sizes, font- types, colour and movement. Kinetic typography requires ‘space-time reading’ on the part of the viewer. 3. 4. With a new advertising medium comes a whole new range of issues for the educator to confront. Is it real?

Human the movie HUMAN, a film by Yann Arthus-Bertrand. Turn on the Closed Captions (CC) to know the countries where the images were filmed and the first name of the interviewees. What is it that makes us human ? Is it that we love, that we fight ? That we laugh ? In order to share this unique image bank everywhere and for everyone,HUMAN exist in several version : A theatre version (3h11) , a tv version (2h11) and a 3 volumes version for the web. CONTACTSOffice Yann Arthus-Bertrand : Yann2@yab.frProject manager: jessica@human-themovie.orgHead of international screenings and distribution : lara@human-themovie.orgFrench events and non-commercial distribution : event@human-themovie.org Official website HUMAN : For further contents, visit and share #WhatMakesUsHUMANWatch the full film from September 12 at

Related:
Related:  Clips for the classroom