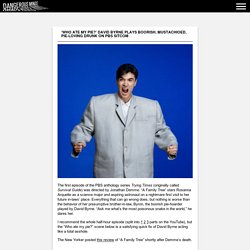 David Byrne plays boorish, mustachioed, pie-loving drunk on PBS sitcom The first episode of the PBS anthology series Trying Times (originally called Survival Guide) was directed by Jonathan Demme. “A Family Tree” stars Rosanna Arquette as a science major and aspiring astronaut on a nightmare first visit to her future in-laws’ place. Everything that can go wrong does, but nothing is worse than the behavior of her presumptive brother-in-law, Byron, the boorish pie-hoarder played by David Byrne. “Ask me what’s the most poisonous snake in the world,” he dares her. I recommend the whole half-hour episode (split into 1 2 3 parts on the YouTube), but the “Who ate my pie?” Theconversation. Actor, director, model, teen vampire movie star – now Kristen Stewart can add research author to her list of credentials. 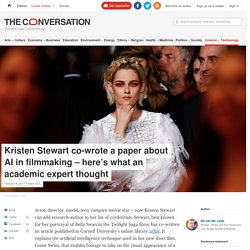 Stewart, best known for her portrayal of Bella Swan in the Twilight Saga films, has co-written an article published in Cornell University’s online library arXiv. It explains the artificial intelligence technique used in her new short film, Come Swim, that enables footage to take on the visual appearance of a painting. Many popular software programs, such as Adobe Photoshop and GIMP, already provide filters that can make photographs take on the general style of oil paintings, pen sketches, screen-prints or chalk drawings, for example.

The algorithms needed to accomplish this first began to produce aesthetically pleasing results in the early 1990s. The techniques that Stewart and her colleagues examine in their article take this idea much further. The article is relatively brief, at just three pages including references. The Was. High Velocity Aerial Filming. Florence Has Left The Building. The Best News Bloopers From March. Coolmaterial. When Mythbusters first aired 13 years ago (on the Discovery Channel, of all networks), no one—including the show’s hosts, Adam Savage and Jamie Hyneman—knew just how successful or special it would be. 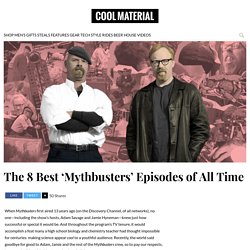 And throughout the program’s TV tenure, it would accomplish a feat many a high school biology and chemistry teacher had thought impossible for centuries: making science appear cool to a youthful audience. Recently, the world said goodbye for good to Adam, Jamie and the rest of the Mythbusters crew, so to pay our respects, here are the 8 best Mythbusters episodes of all time: Brown Note (Episode 25) This episode first aired on February 16, 2005, and featured three fascinating and completely unrelated myths: Is “Chinese water torture” really torturous? If a person gets shot with a gun, is there enough momentum to propel them backwards? How The New York Times, and the American public, man... Run The Jewels: Close Your Eyes (And Count To Fuck) Close Your Eyes (And Count To Fuck) by Run The Jewels feat. 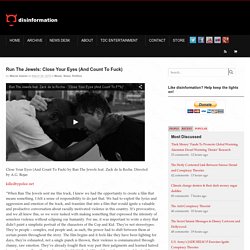 Zack de la Rocha. Directed by A.G. Rojas killedbypolice.net “When Run The Jewels sent me this track, I knew we had the opportunity to create a film that means something. Katy Perry dresses as a Jewish bar mitzvah DJ, tells rabbi jokes in her new “Birthday” video. In a trailer for her new music video (sure!) 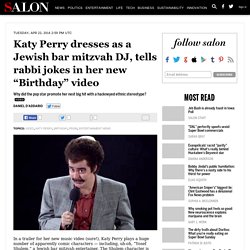 , Katy Perry plays a huge number of apparently comic characters — including, uh-oh, “Yosef Shulem,” a Jewish bar mitzvah entertainer. The Shulem character is Perry in a cheap-looking suit, facial prosthetics, a kinky black wig, thick fake mustache and eyebrows, and a yarmulke. “He,” in a thick accent, tells a joke about rabbis and circumcision. Angry Grandpa is a PARTY BOY. The Funniest Satirical Science Show You've Probably Never Heard Of. Angel martin rockford files. Karl Rove Causes Fox News Chaos By Challenging Obama Victory Projection. David Lynch Presents the History of Surrealist Film (1987) As a fan of surrealism I can't think of anyone better to take us through the history of this art form than master of cinematic weirdness, David Lynch. 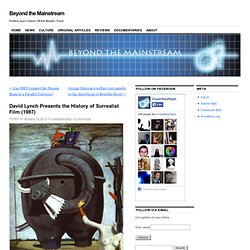 Open Culture serves up not only the rare Arena episode helmed by Lynch but an assortment of surrealist cinema classics, from Un Chien Andalou to the inimitable Jean Cocteau's Blood of a Poet, essential viewing for both fans of the surreal and cinema in general. What living director has drawn the descriptor “surreal” more often than David Lynch? If you’ve seen, or rather experienced, a few of his films — particularly Eraserhead, Lost Highway, Mulholland Dr., or Inland Empire, or even the first half of his television series Twin Peaks — you know he’s earned it. M IS FOR MASTICATE. THE PRISONER, Rejected 1st theme. THE PRISONER 2nd rejected theme. PRISONER, "FALL OUT" Deleted scenes and continuity. TDS-2013-04-02_nihilism. Top 5 investigative videos of the week: When drones attack!

The Art of Pickpocketing: 7 Videos. Stealing someone’s wallet or cell is illegal. 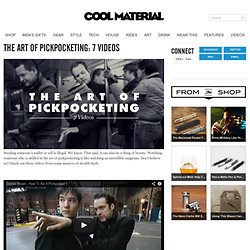 We know. That said, it can also be a thing of beauty. Watching someone who is skilled in the art of pickpocketing is like watching an incredible magician. Don’t believe us? Check out these videos from some masters of stealth theft. Goats yelling like people. SANDS OF IWO- JIMA JOHN WAYNE. The Mating Game SCTV skit. SCTV - Pirini Scleroso 1 - English for Beginners. SCTV Andy Griffith Merv Griffin spoof. 5 Neat Guys. SCTV, 1/16/81 - "GORDON LIGHTFOOT SINGS EVERY SONG EVER WRITTEN" Hey Giorgy! (John Candy SCTV CCCP1 Russian Television) SCTV Uzbeks CCCP1. SCTV Dave Thomas and Catherine O'Hara do Steve and Eydie 1978.