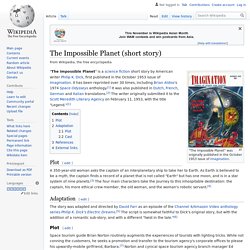 Dick. 8 Emerging Horror Authors Who Are Changing the Face of Horror. John Lanchester · Bond in Torment: James Bond · LRB 5 September 2002. Why William Gibson Is a Literary Genius. Johnny is a walking hard drive: a courier-cum-USB-stick. 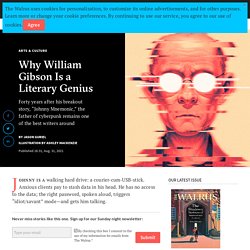 Anxious clients pay to stash data in his head. He has no access to the data; the right password, spoken aloud, triggers “idiot/savant” mode—and gets him talking. Tokyo Street Theater. “The culture shock of defeat is my archetypal image,” the photographer Shomei Tomatsu (1930–2012) once said. 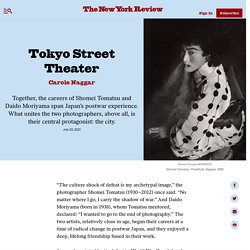 “No matter where I go, I carry the shadow of war.” And Daido Moriyama (born in 1938), whom Tomatsu mentored, declared: “I wanted to go to the end of photography.” The two artists, relatively close in age, began their careers at a time of radical change in postwar Japan, and they enjoyed a deep, lifelong friendship based in their work. Japan, devastated by its defeat in World War II and deeply wounded by the traumas of Hiroshima and Nagasaki, then sought a new identity while both resisting and accommodating the growing influence of American culture. 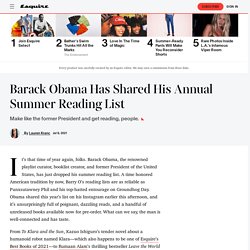 Barack Obama, the renowned playlist curator, booklist creator, and former President of the United States, has just dropped his summer reading list. A time honored American tradition by now, Barry O’s reading lists are as reliable as Punxsutawney Phil and his top-hatted entourage on Groundhog Day. Obama shared this year’s list on his Instagram earlier this afternoon, and it’s unsurprisingly full of poignant, dazzling reads, and a handful of unreleased books available now for pre-order.

From the archives: Denis Johnson’s final book of fiction - Rachel Kushner - Bookforum Magazine. Dear Astronaut Selection Officer: I am a civilian who would like to be considered for the one-year astronaut training program. 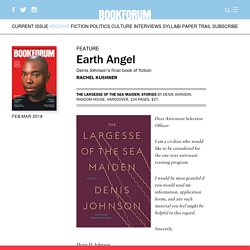 I would be most grateful if you would send me information, application forms, and any such material you feel might be helpful in this regard. Sincerely, Denis H. The cooling of John le Carré by Michael J. Lewis. John le Carré died at the age of eighty-nine last December, a good thirty years after the end of the Cold War that his spy novels chronicled. 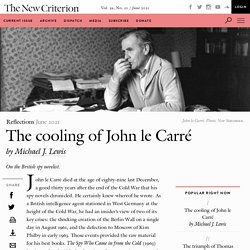 He certainly knew whereof he wrote. As a British intelligence agent stationed in West Germany at the height of the Cold War, he had an insider’s view of two of its key crises: the shocking creation of the Berlin Wall on a single day in August 1961, and the defection to Moscow of Kim Philby in early 1963. Those events provided the raw material for his best books. 35 Books Every Man Should Read in His Lifetime. Books are transportive, eye-opening, life-affirming. 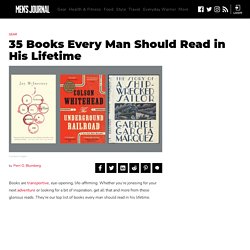 Whether you’re jonesing for your next adventure or looking for a bit of inspiration, get all that and more from these glorious reads. They’re our top list of books every man should read in his lifetime. With some classics and curveballs thrown in the mix, there’s something for every kind of reader. And if you’re looking for a great gift for the bibliophile in your life, this list has got you covered. Review: Jan Swafford's "Mozart: The Reign of Love" “The problem is that this story of Mozart that we think we know is not true at all; thankfully, Jan Swafford is here to correct the problem.” 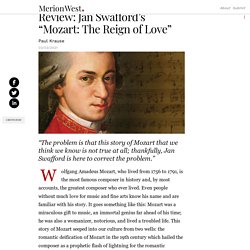 Wolfgang Amadeus Mozart, who lived from 1756 to 1791, is the most famous composer in history and, by most accounts, the greatest composer who ever lived. Even people without much love for music and fine arts know his name and are familiar with his story. It goes something like this: Mozart was a miraculous gift to music, an immortal genius far ahead of his time; he was also a womanizer, notorious, and lived a troubled life. Joan Didion Has Nailed America's Weirdness for Half a Century.

Life in the Post-Internet Dystopia. Before Journeyman circled his sister’s world, he circled Todbaum’s: They had been collaborating on a postapocalyptic television drama. 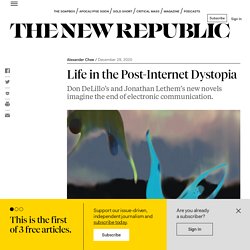 Which translation of Beowulf should I read? By Thelma Trujillo The tenth-century epic poem, Beowulf, is the longest surviving poem in Old English. 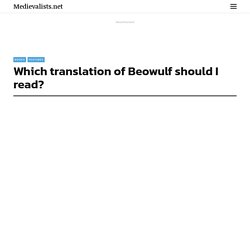 Before the poem was transcribed in a single manuscript, now known as “The Nowell Codex, it was orally transmitted, which explains the alliteration, metrical structure, and memory aids alluding to previous events. At a surface-level, the poem is about a Geatish warrior who is employed to kill monsters, becomes king, and then gets killed by a dragon. Le Carré was right · LRB 17 December 2020. I used to have a pet theory – outlined in the LRB in 2007 – to explain why John le Carré’s later stuff didn’t have, as I saw it, the lightning-in-a-bottle quality of the novels he wrote in the 1960s and 1970s. He had been wrongfooted by social change. More specifically, the declining pay and prestige of most kinds of public service meant that intelligence bureaucracies could no longer serve in the same way as a microcosm of the dark heart of the British establishment. Another 25 Books You Should Read. Since books are so central to the work that I do here at The Corbett Report, it should be no surprise that one of the most frequent requests I get is for a recommended reading list.

In response to those requests, I compiled a New World Order Reading List back in 2015. But that obviously wasn’t enough so in 2017 I gave people a tour of my bookshelf. But that obviously wasn’t enough so in 2019 I got together with Liberty Weekly to compile a list of another couple dozen books to have in any respectable research library. Naomi Klein: Gatekeeper Extraordinaire. Cat McGuire & Colleen McGuire With a title like The Great Reset Conspiracy Smoothie, it appears Naomi Klein is trying too hard to recapture her prowess at defining a meme. Her buzz-concept, “Shock Doctrine,” is spot-on and rightfully successful. But her “Screen New Deal” about Silicon Valley technocrats fizzled. And now she puts forth “Conspiracy Smoothie,” declaring the multitudinous “conspiracies” out there are just one big bizarro mashup, an “inchoate meta-scream.” The word “smoothie” defeats her purpose, though, because smoothies are healthy, yet she wants to brand alternative thinkers as sinister and unhealthy.

Maximalism. In the arts, maximalism, a reaction against minimalism, is an aesthetic of excess. The philosophy can be summarized as "more is more", contrasting with the minimalist motto "less is more". Literature[edit] The term maximalism is sometimes associated with post-modern novels, such as those by David Foster Wallace and Thomas Pynchon,[1] where digression, reference, and elaboration of detail occupy a great fraction of the text. There Are Places in the World Where Rules Are Less Important Than Kindness by Carlo Rovelli – review. We live in a golden age of science writing, where weighty subjects such as quantum mechanics, genetics and cell theory are routinely rendered intelligible to mass audiences. Nonetheless, it remains rare for even the most talented science writers to fuse their work with a deep knowledge of the arts. One such rarity is the Italian theoretical physicist Carlo Rovelli who, like some intellectual throwback to antiquity, treats the sciences and the humanities as complementary areas of knowledge and is a subtle interpreter of both.

By Andrew Delbanco. If, like me, you’re a baby boomer who pleaded as a child to stay up with the big kids to watch The Twilight Zone, you might remember daring yourself to make it all the way through without taking cover behind an older sibling or the family dog. STACKED – books. Sayaka Murata: 'I acted how I thought a cute woman should act - it was horrible' Until recently, Sayaka Murata, who won Japan’s most prestigious literary award, the Akutagawa prize, worked in a convenience store. She had toiled in them for half her life, writing most of her 11 novels and two nonfiction books in her time off. Even after becoming a bestselling author (Konbini Ningen, or Convenience Store Woman, sold 1.4m copies and has been translated into 30 languages), she continued to work behind the counter until the attentions of an obsessive fan forced her to stop. Listen to This by Alex Ross – review. Ayn Rand's pitiless transactions. Ayn Rand was trending on Twitter last week. Not bad, you might think, for a writer of gigantic books who died four decades ago to catch the attention of a site dedicated to people swapping hot takes in 280-character bursts.

Her fresh moment in the sun (think: Christopher Lee bursting into flames) came about because someone had posted a tweet identifying her as a “Warning Sign On A Man’s Bookshelf” – along with Infinite Jest and anything by Charles Bukowski. Ray Bradbury Reveals the True Meaning of Fahrenheit 451: It's Not About Censorship, But People "Being Turned Into Morons by TV" Famous Novelists on Symbolism in Their Work and Whether It Was Intentional. It was 1963, and 16-year-old Bruce McAllister was sick of symbol-hunting in English class. Rather than quarrel with his teacher, he went straight to the source: McAllister mailed a crude, four-question survey to 150 novelists, asking if they intentionally planted symbolism in their work. Seventy-five authors responded. The Home Lives of Literary Spies.

The Best Books to Read in Uncertain Times. A few days ago, I was playing some one-on-one basketball with my son Gus. 80 years of Robin: the forgotten history of the most iconic sidekick. ‘I knew pretty quickly I was on to something’: James Ellroy on writing The Black Dahlia. The Art of the Heist. The NYPL was founded 125 years ago. Here are their 125 favorite books published since then. What Are the Best Weird Fiction Books? Here's Where to Start, Cthulhu. P. G. Wodehouse. The Killer Encyclopedia: A List of Real-Life Murderers, from A-Z. Can We Read Moby Dick? The Noir Poetry and Doomed Romanticism of Cornell Woolrich. The Most Scathing Reviews of 2019. Burke - Book Series In Order. Re-reading the novels of John le Carré. The dice man cometh. Who is the real Dice Man? The elusive writer behind the disturbing cult novel. Brain in a dish, babies by design: what it means to be human. Crime Novels For Angry Women in an Angry World.

Olga Tokarczuk’s Gripping Eco-Mystery. Reconsidering cult novelist Charles Wright - Gene Seymour - Bookforum Magazine. The world of Bruno Schulz. ‘Mad’ Magazine Told the Truth About War, Advertising, and the Media. A Gallery of Mad Magazine’s Rollicking Fake Advertisements from the 1960s. The End of an Era: MAD Magazine Will Publish Its Last Issue With Original Content This Fall. Is China About to Witness a Crime Wave? Pistol Shots Ring Out in the Barroom Night: Bob Dylan, Hardboiled Crime Writer. Cold War Crime Fiction, Then and Now. James Wood (Is Wrong) on Blood Meridian. Cyberpunk: The Human Condition amid High-tech Alienation and Urban Dystopia.

9 Lessons From The Hardy Boys. Books that changed my life – The Polymath Project. What is the Right Poetry Collection for You? A review of Stanisław Ignacy Witkiewicz’s Narcotics. Soraya Roberts. Taibbi: TL:DR Guide to Michael Wolff’s 'Fire and Fury' Never Let Me Go and the Human Condition – Avidly. Theconversation. What Really Happened to the Girls at Hanging Rock? Newrepublic. Police Brutality, a Horror Story. H. P. Lovecraft For Our Time. The Original 1851 Reviews of Moby Dick. Amia Srinivasan reviews ‘Other Minds’ by Peter Godfrey-Smith and ‘The Soul of an Octopus’ by Sy Montgomery · LRB 7 September 2017.