Learn English with us 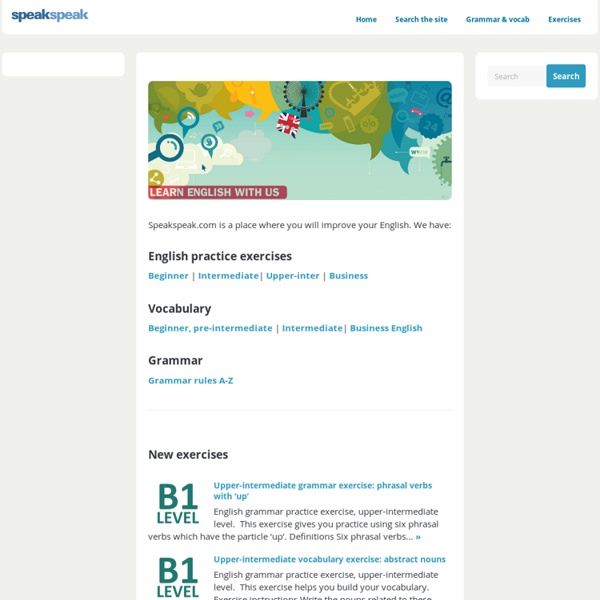 Using “it” with phrasal verbs Many verbs are made up of two parts: a verb and an adverb. These verbs are called phrasal verbs. Examples of phrasal verbs include throw away, put in, give up and wake up. One tricky thing when using phrasal verbs … [Read More...] Prepositions with make: “made of”, “made from”

Can You Catch These Native Speaker Mistakes? From VOA Learning English, this is Everyday Grammar. This week, we will learn a few English words and phrases that are commonly misused in English. Even well-educated native English speakers make the mistakes you will read and hear about today, including reporters and English teachers!

Animations Histoire/Géographie/Sciences Animations flash Dernière mise à jour des liens: 23/07/2016 Actuellement 578 liens actifs. Histoire:Généralités: *Sur les grandes inventions en Histoire: Mon lien Irregular Verbs? Yes,Please! My son Lucas was complaining he was going to have a permanent crick in his neck from spending hourrrrrs (or words to that effect) trying to learn irregular verbs in English when it occurred to me there might be plenty of sites on the Internet to help students, and my own son in this case, with this seemingly daunting task. And just as I predicted there are some cool sites that offer a nice alternative to the traditional pen-and-paper method of learning irregular verbs. Hard to believe me? Then, try these games and I bet you’ll be delighted next time you are asked to study them. Dear Lucas, this post is for you!!! Jeopardy Quiz Game

BBC Learning English BATTLESHIP: IRREGULAR VERBS Much to learn, you still have. – Joda. Despite the evidence that the number of irregular verbs is declining in the English language, there is no danger they will disappear, and the struggle will continue. There are many attempts to find a shortcut in learning irregular verbs, yet with all the options and “magic tricks” available, learning these verbs requires much memorization, drilling and practice. Today I will show how I use the Battleship game to drill and practise irregular verbs in a fun way. Before the game: Each player will need two 10×10 grids – one with irregular verbs in each square, and one blank grid.

singular "they" - definition and examples in English grammar By Richard Nordquist Updated February 20, 2016. Definition In English grammar, singular "they" is the use of the pronoun they, them, or their to refer to a singular noun or to certain indefinite pronouns (such as anybody or everyone). Also called epicene "they" and unisex "they." Common Errors in the Use of English Prepositions A preposition connects nouns and pronouns and serves to provide necessary details that tell the reader when, where, or how something occurred… Incorrect: I recommend you to take a long vacation.Correct: I recommend that you take a long vacation.Incorrect: Come to here.Correct: Come here.Incorrect: The sun rises from the East.Correct: The sun rises in the East.Incorrect: The thief got in from the window.Correct: The thief got in through the window.Incorrect: Let's begin from page 10.Correct: Let's begin at ( on ) page 10.Incorrect: Are you home tomorrow.Correct: Are you at home tomorrow.Incorrect: There is a limit in my patience.Correct: There is a limit to my patience.Incorrect: Is your house insured for fire ?Correct: Is your house insured against fire ? Incorrect: Keep the right.Correct: Keep to the right.Incorrect: What a dirty face ! Look at the mirror.Correct: What a dirty face !