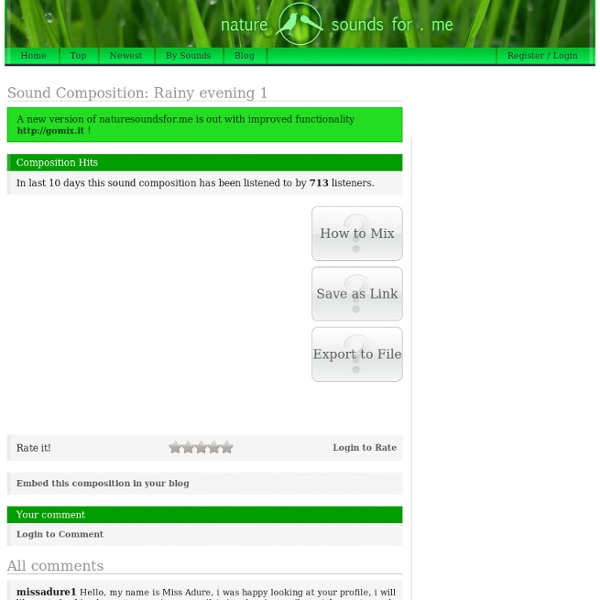 1. Choose a sound In order for nature sounds to start playing choose a sound from drop-down box for one channel and drag the volume slider up. 2. Add more sounds You can add more nature sounds to composition by choosing other sounds in other channels. 3. Pan the channel (with horizontal slider) to the left or to the right for stereo effects. 4. If you want the sound volume to fluctuate instead of playing continuously, click on a drop-down box with a green line and choose one of interrupted lines.

Seaquence Seaquence is an experiment in musical composition. Adopting a biological metaphor, Seaquence allows you to create and combine musical lifeforms into dynamic compositions. Go! How to play The way each creatures looks and sounds is determined by the step-sequencer pattern, and other parameters you can tweak including their audio waveform, octave, scale, melody, envelope, and volume.

6 Ways Drumming Heals Body, Mind and Soul From slowing the decline in fatal brain disease, to generating a sense of oneness with one another and the universe, drumming's physical and spiritual health benefits may be as old as time itself. Drumming is as fundamental a form of human expression as speaking, and likely emerged long before humans even developed the capability of using the lips, tongue and vocal organs as instruments of communication. To understand the transformative power of drumming you really must experience it, which is something I have had the great pleasure of doing now for twenty years. Below is one of the circles I helped organize in Naples Florida back in 2008, which may give you a taste of how spontaneous and immensely creative a thing it is (I'm the long haired 'hippie' with the gray tank top drumming like a primate in the background). But drumming is not a distinctively human technology.

Linux Newbie Guide: Shortcuts And Commands Linux Shortcuts and Commands: Linux Newbie Administrator Guideby Stan and Peter Klimas This is a practical selection of the commands we use most often. 5 Ways To Hack Your Brain Into Awesomeness Much of the brain is still mysterious to modern science, possibly because modern science itself is using brains to analyze it. There are probably secrets the brain simply doesn't want us to know. But by no means should that stop us from tinkering around in there, using somewhat questionable and possibly dangerous techniques to make our brains do what we want. We can't vouch for any of these, either their effectiveness or safety. All we can say is that they sound awesome, since apparently you can make your brain... #5.

sound search All sounds were generated through basic effects, vst's, wave editing, time shifting, cutting, and sampling. If these sounds were ... If you are using a movie editing program that does not support .WAV, then you must convert the file into ... Key Chords Key Chords app generates guitar chord progressions automatically. Use it free online, or get the app for Mac, Windows or iOS (iPad) - Click on a chord to preview how it sounds. - Drag and drop to arrange the chord progression - Tweak the settings to control the playback speed Or role the dice and Key Chords will automatically generate a nice sounding progression. Select a Key: Select a key and choose a the major or minor scale.

Store — GoPano micro How it works GoPano micro uses a specially curved mirror which gathers light from all directions and funnels it into the iPhone’s camera. Time dilation Time dilation explains why two working clocks will report different times after different accelerations. For example, ISS astronauts return from missions having aged slightly less than they would have been if they had remained on Earth, and GPS satellites work because they adjust for similar bending of spacetime to coordinate with systems on Earth.[1] An accurate clock at rest with respect to one observer may be measured to tick at a different rate when compared to a second observer's own equally accurate clocks. This effect arises neither from technical aspects of the clocks nor from the fact that signals need time to propagate, but from the nature of spacetime itself.

Drunken Gummies (Vodka-Infused Gummi Bears) This Instructable takes a bit more than a week to complete, but the end result is certainly worth it! You will need: - 1 1/2 cups of vodka (can use more or less if desired)- 1 tub of gummi bear candies, plastic with lid (about 1kg. Tub found at Wal-mart)- 1 can of frozen juice concentrate, any flavour desired (I used fruit punch.) You can keep the juice frozen for now, as you will not need it for a few days. - First step is to open the lid of your gummi bears and pour in the vodka.

Free White Noise Here are the sound files I have for you to download. I recorded all of them using the "voice notes" feature on my cell phone, which basically records low quality wav files. As such, the quality is not the greatest, but I'm guessing that if someone were looking for a high-fidelity clothes dryer sound, they probably wouldn't be looking here. If you would llike to download these files for your own personal use (such as burning them to a CD), just right-click on the name of the file you wish to download and choose where you would like to save it. The Sacred Geometry Of Music The Sacred Geometry Of Music by Andrew Lorimer Music uses the laws of vibration to manifest aurally what exists at the center of everything. Into our reality springs a non-visual harmonic law that is universal. The notes and intervals of music speak directly to the chakra centers and causes them to vibrate in harmony to the vibration of a string or vocal chords, speakers moving through the air, or the sound of someone’s lips making a farting noise through a metal tube. Music uses the laws of physics and mathematics to bring out an emotional response in the listener. The music of the Western world uses a mathematical system based on Twelve. All the songs you have ever known and sang along to in your life use the same simple laws based on the number twelve.

GoPro Dolly – Motor Test GoPro Dolly – Motor Testing from Rob Antill on Vimeo. I’ve got a big exciting project coming up which will involve a fair amount of time-lapse bits. So to make the shots look a bit more interesting I set out to make my own motorized time-lapse dolly. The above video was shot entirely with a GoPro Hero 2 and the little rig I built. Click below to read how it was made… Lackadaisy Expressions Boy, I didn't know what I was getting myself into when I started this. I've had requests for some sort of expressions tutorial dating back a while now, so I figured, "Sure! I can explain expression drawing...and it'll be way better than all those tutorials out there that are nothing but charts of generic expressions. Yeah! Just give me a day or two to whip something up..."

The Shirt As with all these designs, try to start with a relatively clean, crisp bill. It will make it much easier. All folds should be sharply creased. It helps to go over the fold with a fingernail on a flat, hard surface. Start by folding the bill precisely in half lengthwise.

Soothing sounds of nature... Choose from various sounds into various combinations of up to four sounds at a time. Edit the volume, pace and which sounds you want to listen too until you find the combonation that works for you. by troymiller Nov 11