This is Our Planet 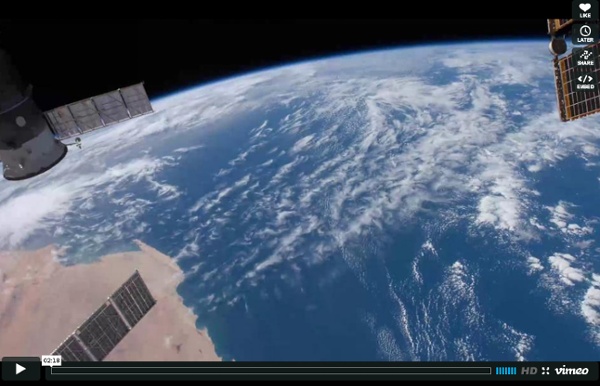 Earth from Above a collection of aerial photography "Earth From Above" is the result of the aerial photographer Yann Arthus-Bertrand's five-year airborne odyssey across six continents. It's a spectacular presentation of large scale photographs of astonishing natural landscapes. Every stunning aerial photograph tells a story about our changing planet. Coal mine in South Africa Sha Kibbutz, Israel Shark! Fisherman Gets Quite A Scare, Catches Scene On Video : The Two-Way Isaac Brumaghim was reeling in a tuna Sunday about two miles off Hawaii's Oahu Island when he came as close as anyone wants to get with a tiger shark that weighed 400 to 500 pounds. Needless to say, Brumaghim got quite a scare as the shark nearly jumped into his kayak when it took his catch. "It definitely was an adrenaline rush for me out there," he said afterward, according to Hawaii News Now. "Life and death right in front of you. It put some things into perspective."

Story of Change Over the past several decades, many environmental and social change efforts have come to reflect the centrality of shopping in our culture, suggesting change can be made—or is even best made—through alterations in our individual consumption patterns. These efforts—buy Fair Trade or organic, use a reusable bag, screw in a CFL lightbulb—are a great place to start, but they are a terrible place to stop, ignoring the real source of our power: coming together as engaged citizens. In The Story of Change, released in July 2012, Annie Leonard argues that it’s not bad shoppers who are putting our future at risk; it’s bad policies and business practices. If we really want to change the world, we have to move beyond voting with our dollars and come together to demand rules that work.

An eclipse from space with a two-way Moon This is pretty wild: a partial solar eclipse on March 4, 2011 as seen from NASA’s Solar Dynamics Observatory! Watch as the Moon slips in front of the face of the Sun in this video: Cool! In this far-ultraviolet view, you can see magnetic activity on the Sun’s surface, like arcing gas eruptions and sunspots (which are dark in visible light, but very bright in the UV), and the roiling, bubbling motion as pockets of hot solar gas rise and fall.

Dr. Benjamin Carson Addresses National Prayer Breakfast, Criticizes Obamacare Famed Baltimore neurosurgeon Dr. Benjamin Carson addressed the National Prayer Breakfast on Thursday morning on healthcare. Dr. Carson often criticized Obamacare and government intrusion in healthcare while President Obama sat in the audience. Dr. Carson encouraged a program where newborn babies are given health savings account as an alternative to Obamacare. The Angry Red Galaxy [Bonus points to any middle-aged readers who recognize the title*.] I still get a thrill every time I see a particularly beautiful image of an astronomical object. But there are some that transcend that beauty, adding a dimension of what-the-what? that makes them just that much cooler.

New type of silicone exhibits both viscous and elastic properties Looking for a more effective solution to the all-too-common wobbly table dilemma than a folded up bit of cardboard or piece of rubber under the leg, University of Virginia physicist Lou Bloomfield created a new type of silicone rubber called Vistik – it's malleable enough to take on any shape when pressed, but is still resilient enough to offer support, as it gradually starts to return to its original shape as the pressure is released. The material could have many applications ... beyond just steadying up wobbly tables. Vistik is a viscoelastic material, meaning that it exhibits both viscous and elastic properties. As a result, when compared to something such as conventional silicone rubber, there’s a considerable time lag in its response to continuous pressure.

10 Signs That You’re Fully Awake Here are ten signs you may be fully awake: 1. You know there’s no meaningful difference between major political parties (Democrats and Republicans): It’s so easy to get caught up the left-right debate and believe there’s a difference between the two major political parties. However, debate is one thing, while actions are another. By their deeds you shall know them, and it is indisputable that there is no significant difference between political parties when it comes to action on the most important issues. Even hardened ideologues like John Cusack are beginning to wake up. Los Cielos del Ecuador, Chimborazo Volcano With an altitude of 6268 meters (20564 ft) above sea level, Chimborazo volcano is the highest summit in Ecuador but of course not the highest summit on the planet. This record belongs to Mount Everest (8848 metres / 29029 ft above sea level). However, because the Earth is not a perfect sphere but rather an oblate spheroid (a sphere flattened along the axis from pole to pole such that there is a bulge around the equator) and that Chimborazo is very close to the equator line (only -1 degree in latitude), Chimborazo is known as the "the farthest location from the center of the Earth". 6384.687 Km against 6382.467 Km for Everest that is, a difference of 2.220 Km/1.38 miles.

Iconic Artists at Work: Watch Rare Videos of Picasso, Matisse, Kandinsky, Renoir, Monet and More Claude Monet, 1915: We’ve all seen their works in fixed form, enshrined in museums and printed in books. But there’s something special about watching a great artist at work. Over the years, we’ve posted film clips of some of the greatest artists of the 20th century caught in the act of creation.