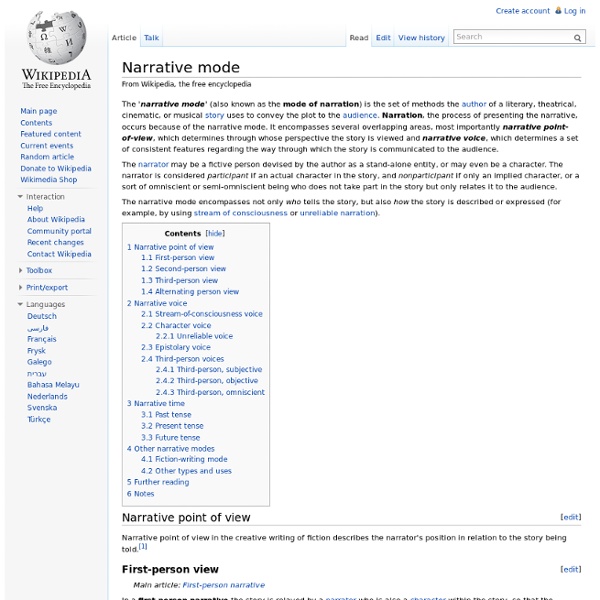 The narrative mode (also known as the mode of narration) is the set of methods the author of a literary, theatrical, cinematic, or musical story uses to convey the plot to the audience. Narration, the process of presenting the narrative, occurs because of the narrative mode. It encompasses several overlapping areas, most importantly narrative point-of-view, which determines through whose perspective the story is viewed and narrative voice, which determines a set of consistent features regarding the way through which the story is communicated to the audience. Narrative mode is a literary element. The narrator may be either a fictive person devised by the author as a stand-alone entity, the author himself, and/or a character in the story. The "narrator" can also be more than one person, to show different story lines of people at the same, similar or different times. Narrative point of view[edit] First-person view[edit] I could picture it. Second-person view[edit] Third-person view[edit]

Voice in Writing: Developing a Unique Writing Voice Finding a writing voice can be a struggle, whether you’re writing a novel, short story, flash fiction or a blog post. Some may even wonder, what is voice in writing? A writer’s voice is something uniquely their own. It makes their work pop, plus readers recognize the familiarity. You would be able to identify the difference between Tolkien and Hemingway, wouldn’t you? It’s the way they write; their voice, in writing, is as natural as everyone’s speaking voice. When you find that unique voice, you might not even be able to explain how it came about—let alone describe what it is. “I am looking for authors with a distinctive voice.” What the heck is “voice”? How can you develop your voice? You can facilitate voice by giving yourself the freedom to say things in your own unique way. Science fiction writer Neal Stephenson has a unique voice. The Deliverator’s car has enough potential energy packed into its batteries to fire a pound of bacon into the Asteroid Belt. Oho. You might also like:

Point of View: 1st, 2nd & 3rd Person Narrative Viewpoints, Literature Advice on how to choose between first person, second person, 3rd person point of view and more! By Brian Klems, Online Editor Tools in the Writer's Craft: Character, Emotion and Viewpoint Buy Me! Of all the decisions you need to make when crafting a novel, choosing the point of view from which you tell your story is one of the most important. Save 10% Off Select POV Products! Final discounts will be displayed within the cart for qualifying items. Writing Point of View Many books are written with a predetermined narrative point of view, but that isn’t always the best way to go about it. Narrative Viewpoint Writing Made Easy Developing voice, narrative and character can be extremely difficult if you don’t surround yourself with the right tools. Digging Deeper Into POV Understanding definitions isn’t the only important element of the overall process of choosing your novel’s point of view. Recommended Point of View Products Enjoy a Discount! Literary Points of View Putting Your Viewpoint To The Test

Unreliable narrator An unreliable narrator is a narrator, whether in literature, film, or theatre, whose credibility has been seriously compromised.[1] The term was coined in 1961 by Wayne C. Booth in The Rhetoric of Fiction.[1][2] While unreliable narrators are almost by definition first-person narrators, arguments have been made for the existence of unreliable second- and third-person narrators, especially within the context of film and televison. An exception is an event that did not or could not happen, told within the fictionalized historical novels, speculative fiction, or clearly delineated dream sequences. Narrators describing them are not considered unreliable. Overview[edit] Classification[edit] Attempts have been made at a classification of unreliable narrators. Examples in modern literature are Moll Flanders, Simplicius Simplicissimus or Felix Krull. The Clown: A narrator who does not take narrations seriously and consciously plays with conventions, truth and the reader's expectations. Wayne C.

Which Point of View Should You Use in Your Novel? Which point of view to use in your novel is one of the biggest decisions every writer faces. It’s not easy to figure out sometimes, and reading trends can make the decision even harder. Should you follow the wide road of popular opinion or forge your own trail? The good news is that with point of view there is no right or wrong. What is Point of View in a Novel? Simply put, point of view is a window looking into a scene or story from the mindset of a character. How Many Viewpoint Characters Should You Have? The simplest form of a novel is to have the protagonist as the viewpoint character. Many novels contain more than one viewpoint character, and for good reason. How many viewpoint characters should you have? Which Viewpoint Characters Should You Use? We writers put a lot of emphasis on defining our writing voices, but we can sometimes overlook story voice, also known as tone or mood. In much the same way, the viewpoint character of a scene or story helps determine its tone.

How to Write in Deep POV + get inside the mind of your character | She's Novel photo cred: © Paolo Imbag via Unsplash This post is part of the HOW TO WRITE A STORY guide series. Have you ever read a story where you feel completely one with the point of view character? It’s as if you are that person. You are living their life, pursuing their journey. You even forget that you are reading a book and that an author lives behind every word. That is an awesome experience, is it not? Novels like these are often written using a technique called Deep Point of View, or Deep POV for short. In fact, if not done with the utmost care, Deep POV can actually drive readers away. There are plenty of magical novels that have become successes without utilizing the Deep POV technique, The Great Gatsby, Pride and Prejudice, and The Chronicles of Narnia to name a few. But what is Deep POV anyway? Deep POV is a technique used to get inside the mind of a character and make a deep emotional connection with readers. Like many other techniques, Deep POV can not be perfected overnight. 1. 2.

25 Things You Should Know About Narrative Point-Of-View 1. Know Thy Narrator One of the first questions you have to ask is, who the fuck is telling this story? Is intrepid space reporter Annie McMeteor telling it in her own voice? Is a narrator telling Annie’s story for her? Is the story told from a panoply of characters — or from a narrator attempting to tell the story by stitching together a quilt of multiple minds and voices? 2. You already know this but it bears repeating: first-person POV is when the story is told with the pronoun “I” (I went to the store, I like cheese, I killed a man in Reno not so much to watch him die but more because I wanted his calculator wristwatch). 3. The second-person mode uses the pronoun “you.” 4. A novel has no camera because a novel is just a big brick of words, but for the sake of delicious metaphor, let’s assume that “camera” is representative of the reader’s perspective. 5. Put different, it becomes a question of intimacy. 6. 7. 8. YOU ARE NOW A GOLDEN GOD. 9. 10. 11. 12. 13. 14. 15. 16. 17. 18. 19.

Writing a Multiple Viewpoint Novel | Novel Writing Help Let's start with the basics... A multiple viewpoint novel is one in which two or more members of your cast list are viewpoint characters – that is, those characters through whose eyes we witness the events of the novel and whose thoughts and feelings we have direct access to. Or to put it even more simply... If different chapters are narrated by different characters – chapter one from John's point of view, chapter two from Helen's – you're writing a multi-viewpoint novel. Multiple viewpoints are common in novels, so it would hardly be a risky choice if you chose to write one yourself. The Pros and Cons of Using Multiple Viewpoints Is it better to stick with one viewpoint character, or does having two or more characters in the spotlight add dimension to your novel? First the "difficulty" issue... While it's certainly the case that writing from more than one point of view is more complicated, it isn't much more complicated. A bigger issue than difficulty is that of "focus"... My best advice?

The Complete Guide to Interior Monologue | Novel Writing Help Interior monologue is the fancy literary term for a character's thoughts in a novel. In real life, the stream of thoughts we all have running through our heads at any given moment is more often referred to as internal monologue, though the two terms mean precisely the same thing. While we are dealing with definitions, a couple of closely-related literary terms are... Stream of Consciousness. This is where an entire novel, or at least large chunks of a novel, takes the form of the central character's thoughts. To keep this article to a reasonable length (though it's still a biggie!) For a preamble on why it is important, check out this article (then click the "Back" button to return here)... Why Characters' Thoughts Matter. The Two Types of Interior Monologue Okay, let's start with the basics. So far, so simple! A short interior monologue tends to happen in the middle of a scene. Here is an example of a short interior monologue from Nick Horny's novel Juliet, Naked. Interior Monologue Mechanics