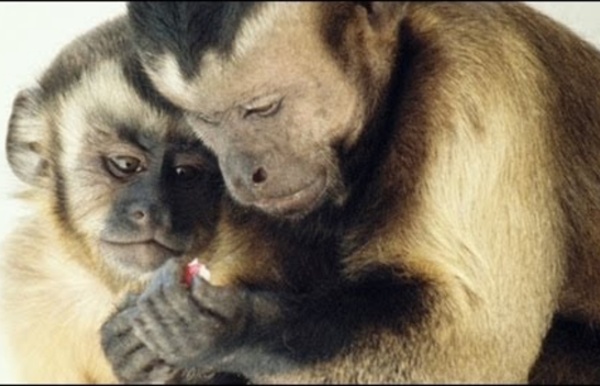 Future - Death rituals in the animal kingdom When a Jewish person dies, according to tradition, a member of a group called the chevra kadisha stays with the body from death until burial, continually reciting passages from the book of Psalms. For those in the Catholic church, friends and family members gather together in the presence of the deceased in a ceremony called a wake. Similarly, when ancient Romans died, relatives immediately gathered around the body, reciting lamentations. The body was kept close, in the atrium of the family home, until the funeral procession began. These behaviours transcend cultural boundaries. But as we are beginning to discover, these behaviours may transcend species boundaries as well. On 10 October 2003, a researcher watched as a female elephant named Eleanor collapsed. The parade of elephants that followed may – in some deep, fundamental way – be no different from those who gather to pay respects to a dignitary lying in state. Underwater rituals Learning about death

2019 Comedy Wildlife Photography Awards Did you know that each year there is a Comedy Wildlife Photography contest that give out awards to funniest animal pictures? There is. And it’s brilliant. Featured below are this year’s finalists. 2018 best entries here. Orangutan from Borneo photographed using a spear tool to fish Tool use among orangutans was first documented by Carel van Schaik. In 1994, Carel observed orangutans developing tools to help themselves eat, while conducting field work in Gunung Leuser National Park, in the northwest Sumatra. Specifically the orangutans were using sticks to pry open pulpy fruits that have “Plexiglas needles” capable of delivering a painful jab covering them. Using the tools, the orangutans were getting past handling the prickly husk and into the nutritious fruit. From an anthropological viewpoint, tool use represents an aspect of culture, since the entire group participates in a behavior that has developed over time. One unique thing to clarify is that only Sumatran orangutans have been observed to use tools, not orangutans from Borneo. Recently, Gerd Schuster co-author of Thinkers of the Jungle: The Orangutan Report, took this photograph of, Pretty awesome image, no? Schaik, C.P., Fox, E.A., Sitompul, A.F. (1996). Like this: Like Loading... Related In "Blog"

Animals Know When They Are Being Treated Unfairly (And They Don’t Like It) Humans beings appear to be hardwired to have a sense of fairness. This is puzzling from an evolutionary perspective, which you would have thought would mean we were predisposed to seek advantage for ourselves and our families wherever possible. But in fact a sense of fairness is important for humans to be able to help each other. Human cooperation is based on reciprocal altruism – we help people because they’ve either helped us in the past or they may help us in the future. This form of cooperation is only possible when individuals are able to keep track of other individuals’ efforts and payoffs – and a sense of fairness helps with this. But what about non-human animals? There’s a way of testing for this in animals using an “inequity aversion task”. One of the first species that was tested for inequity aversion were brown capuchin monkeys. Capuchin monkeys also showed an awareness of what’s fair. orangecrush, Shutterstock

Researchers "Translate" Bat Talk. Turns Out, They Argue—A Lot Plenty of animals communicate with one another, at least in a general way—wolves howl to each other, birds sing and dance to attract mates and big cats mark their territory with urine. But researchers at Tel Aviv University recently discovered that when at least one species communicates, it gets very specific. Egyptian fruit bats, it turns out, aren’t just making high pitched squeals when they gather together in their roosts. They’re communicating specific problems, reports Bob Yirka at Phys.org. According to Ramin Skibba at Nature, neuroecologist Yossi Yovel and his colleagues recorded a group of 22 Egyptian fruit bats, Rousettus aegyptiacus, for 75 days. They found that the bat noises are not just random, as previously thought, reports Skibba. “We have shown that a big bulk of bat vocalizations that previously were thought to all mean the same thing, something like ‘get out of here!’ This isn't the end of the research, Yirka reports.

The Surprisingly Humanlike Ways Animals Feel Pain Don't tell someone who just stapled a string of Christmas lights to their hand, but pain can be a good thing. Pain is a messenger: It tells us that there's a problem and that we need to take care of it. People can express discomfort, but animals sometimes have a tougher time. This led Weird Animal Question of the Week to wonder: "Do animals feel pain the same way we do, and how can we tell?" (Related: "Yes, Animals Think And Feel. Here’s How We Know.") Show Us Where It Hurts Mammals share the same nervous system, neurochemicals, perceptions, and emotions, all of which are integrated into the experience of pain, says Marc Bekoff, evolutionary biologist and author. Whether mammals feel pain like we do is unknown, Bekoff says—but that doesn’t mean they don’t experience it. There are some clues as to how animals—especially pets—communicate physical suffering. For instance, Dorothy Brown’s dog Foster has phantom limb pain in a leg that was amputated after being hit by a car. I Feel Ya

Photographer Captures the Wild Beauty and Elegance of Horses Animals are perhaps one of the most difficult photography subjects to work with–you can’t exactly ask a cat to smile for the camera and expect it to happen. Photographing equine models comes with its own set of challenges, as one attempts to communicate the intrinsic grace and beauty of these large, flighty beasts. German photographer Wiebke Haas tweaked the art of animal photography for years, and now consistently produces stunning photographs of magnificent animals. After working for years in the field, she has gained some insight on how to get the best from her equine models, (which she explains in full on her 500px page). Haas feels that when we look at animals we see bits of ourselves, constantly comparing their behaviours and characteristics with our own.

Gorilla Youngsters Seen Dismantling Poachers' Traps—A First "This is absolutely the first time that we've seen juveniles doing that ... I don't know of any other reports in the world of juveniles destroying snares," said Veronica Vecellio , gorilla program coordinator at the Dian Fossey Gorilla Fund 's Karisoke Research Center , located in the reserve where the event took place. "We are the largest database and observer of wild gorillas ... so I would be very surprised if somebody else has seen that," Vecellio added. (Also see "Dian Fossey's Gorillas Exhumed for Investigation." ) Bush-meat hunters set thousands of rope-and-branch snares in Rwanda's Volcanoes National Park, where the mountain gorillas live. The traps are intended for antelope and other species but sometimes capture the apes. Adults are generally strong enough to free themselves. Just last week an ensnared infant named Ngwino, found too late by workers from Karisoke, died of snare-related wounds. The hunters, Vecellio said, seem to have no interest in the gorillas.

Oh My God, Fish Can Recognise Human Faces It’s enough to make this writer seriously consider vegetarianism: A new study has found that fish can recognise human faces. The paper, published in Scientific Reports, found that archerfish—a tropical species that can shoot water jets from its mouth—could learn to distinguish an image of an individual human’s face from others, even when the pictures were controlled for colour and head shape. Lead author Cait Newport said that the motivation of the work was to better understand how humans recognise faces. She explained that there are two theories on how human facial recognition works: One suggests that this skill relies on complex and specialised brain circuitry such as that in the human neocortex; the other suggests that it’s a learned skill that doesn’t necessarily need this brain structure. The researchers showed their four fish two faces on a monitor over their aquarium and taught them to spit at one but not the other for a food reward. Action shot of one of the archerfish spitting.

Primate cognition Origin of man now proved. Metaphysic must flourish. He who understands baboon would do more towards metaphysics than Locke. Primate cognition is the study of the intellectual and behavioral skills of non-human primates, particularly in the fields of psychology, behavioral biology, primatology, and anthropology.[1] Primates are capable of high levels of cognition; some make tools and use them to acquire foods and for social displays;[2][3] some have sophisticated hunting strategies requiring cooperation, influence and rank;[4] they are status conscious, manipulative and capable of deception;[5] they can recognise kin and conspecifics;[6][7] they can learn to use symbols and understand aspects of human language including some relational syntax, concepts of number and numerical sequence.[8][9][10] Studies in primate cognition[edit] Theory of mind[edit] There has been some controversy over the interpretation of evidence purporting to show theory of mind ability—or inability—in animals.

Researcher decodes prairie dog language, discovers they've been talking about us (Video) You might not think it to look at them, but prairie dogs and humans actually share an important commonality -- and it's not just their complex social structures, or their habit of standing up on two feet (aww, like people). As it turns out, prairie dogs actually have one of the most sophisticated forms of vocal communication in the natural world, really not so unlike our own. After more than 25 years of studying the calls of prairie dog in the field, one researcher managed to decode just what these animals are saying. And the results show that praire dogs aren't only extremely effective communicators, they also pay close attention to detail. According to Dr. And, when they're talking about humans, that might not always be flattering. "For example, a human alarm call not only contains information about the intruder being a human, but also contains information about the size, shape (thin or fat), and color of clothes the human is wearing," says Dr. For more information on Dr.