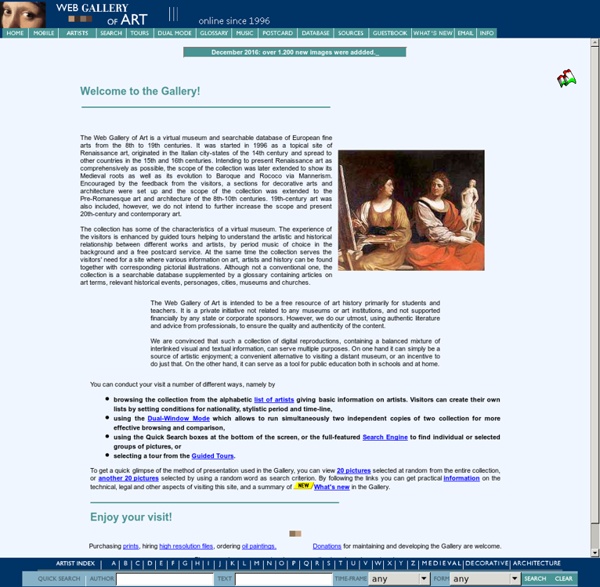 Icons and Iconoclasm in Byzantium Definition of Icons Icons (from the Greek eikones ) are sacred images representing the saints, Christ, and the Virgin , as well as narrative scenes such as Christ's Crucifixion . While today the term is most closely associated with wooden panel painting , in Byzantium icons could be crafted in all media, including marble, ivory, ceramic, gemstone, precious metal, enamel, textile, fresco, and mosaic.

How to Make Your Own Stretcher Bars for a Stretched Canvas Painting Today I’m going to take you through the process that I use to make my canvases. As I’ve mentioned in an earlier article on improving compositions, choosing the correct size and crop of your artwork is extremely important. If you’re a painter, the only way to really do that is to stretch your own canvas to the shape and size you want.

archi...tech's Talk With reference to the earlier post on arches, this one defines the various types of arches. Arches are constructed in four basic shapes that frame and support doors, windows, porches, and other wall openings: Flat archTriangular archRound archPointed arch Flat arch An arch having a horizontal intrados with voissoirs radiating from a centre below, often built with a slight camber to allow settling is called a flat or jack arch.

Books: Lichtenstein In the late 50s and 60s, American painter Roy Lichtenstein (1923-1997) became one of the most important exponents of Pop Art - that movement which transformed products of mass consumption and the entertainment industry into subjects for art. This apotheosis of banal, everyday objects simultaneously constituted a criticism of the traditional elitist understanding of art. Almost alone among artists, Lichtenstein pursued the question of how an image becomes a work of art. Wholly in keeping with the spirit of the Classical Modern, he held that it was not the "rank" of the picture’s subject that lends the picture its artistic character, but rather the artist’s formal treatment of it. To Lichtenstein, however, this position seemed far too broad to be seriously pursued. Developed in the early 60s, Lichtenstein’s grid technique, with its allusion to the mass-production of graphic art, allowed the painter to give vent to his own artistic scepticism.

Language of flowers The language of flowers, sometimes called floriography, is a means of cryptological communication through the use or arrangement of flowers. Meaning has been attributed to flowers for thousands of years, and some form of floriography has been practiced in traditional cultures throughout Europe, Asia, and the Middle East. Plants and flowers are used as symbols in the Hebrew Bible — particularly of love and lovers in the Song of Songs,[1] as an emblem for the Israelite people[2] and for the coming Messiah[3] — and of Jesus Christ in the New Testament.[4] In Western Culture, William Shakespeare ascribed emblematic meanings to flowers, especially in Hamlet, Prince of Denmark.

Public Art Concepts - Dan Sternof Beyer 2011 - StumbleUpon Download the PDF of these ideas : Public Art Concepts - Dan Sternof Beyer 2011 (2mb) [ New American Public Art ] Plitvice, a watery paradise in Croatia - StumbleUpon In recent years, Croatia has changed from a relative unknown to one of the trendiest destinations in Europe. To a great extent this is due to the country's rocky littoral, which, washed by the Adriatic, is considered one of the most beautiful of the Mediterranean coastlines. Then there is the rich history and cultural heritage of medieval towns such as Dubrovnik, Split and Sibenik.

The Renaissance Art Period - About.com Art History We all know what the Renaissance was, correct? Michelangelo, Leonardo, Raphael, and company created some fabulous paintings and sculptures that we continue to marvel over many centuries later and so on and so forth. (Hope you are nodding your head right now and thinking "Yes, yes - please get on with it!") While these were vitally important artists, and their collective work is what usually comes to mind when one hears the word "Renaissance", as so often happens in life things aren't quite that simple.