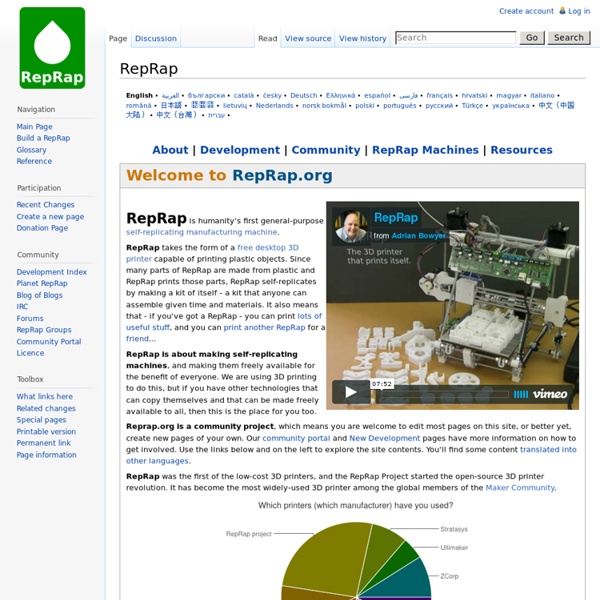 About | Development | Community | RepRap Machines | Resources RepRap is humanity's first general-purpose self-replicating manufacturing machine. RepRap takes the form of a free desktop 3D printer capable of printing plastic objects. Since many parts of RepRap are made from plastic and RepRap prints those parts, RepRap self-replicates by making a kit of itself - a kit that anyone can assemble given time and materials. It also means that - if you've got a RepRap - you can print lots of useful stuff, and you can print another RepRap for a friend... RepRap is about making self-replicating machines, and making them freely available for the benefit of everyone. Reprap.org is a community project, which means you are welcome to edit most pages on this site, or better yet, create new pages of your own. RepRap was the first of the low-cost 3D printers, and the RepRap Project started the open-source 3D printer revolution. About | Development | Community | RepRap Machines | Resources

Jumbo 3D-Printer PRotos X400 The biggest 3D-Printer based on RepRap technology known to us with a printing area of 400x400x350mm. The new PRotos X400 by German RepRap combines the advantages of the OpenSource technology with a performance and a quality “Made in Germany” interesting for professional operators in machinery and plant engineering, small batch production or in electronic industry and for ambitious private users. A layer thickness up to 0.1mm and a printing space of 400 x 400 x 350mm, allow the printing of precise models with a volume up to about 56 liter.

Printrbot: The Perfect Beginner 3D Printer Can Expand Itself There are a host of 3D printers out there, but none are as simple and inexpensive as the Printrbot created by Brook Drumm. It’s still in Kickstarter mode, but as of this writing,( the Printbot has already met the pledge goal. So we’re going to be seeing some of these in the future, and I know I already want to get my hands on one. There are a lot of different Printrbot kits you can order right now by pledging funds to the project: Some kits have only the basic parts, and no electronics, while some are even sparser, not even containing motors and hardware. I suppose if you got a bunch of hardware lying around and want to buy the electronics yourself that’s a good way to go, but Brook will offer a kit for $499 that includes everything you'll need to build it.

Builders: first tests building a powder-based stereolithography printer: part 1 hi folks, i'm a bit sleepy, but i thought i'd post this while it's fresh: after seeing really interesting powder-based printer designs like this one, that place down a layer of powder then "print" a binding material onto it, i began to wonder (as others have) if we could build a similar setup using ABS powder and a laser diode to fuse the material together. designs like this have a bunch of benefits, including the potential to use the powder as it's own support material. (and, after a few weeks of tinkering with building an extruder for a second printer that *constantly* clogs, i think i needed a break to think about better days when we won't need to rebuild extruders, or hope we build working ones in the first place... ). my goals for this tinkering are to build things with common off-the-shelf materials wherever possible, and so I went searching for some form of ABS powder, as well as a laser diode.

Matterport The Only End-to-End 3D Media Platform 1CaptureUse the Matterport Pro 3D Camera to scan your space and upload your 3D data to the Matterport Cloud.2Create & HostMatterport cloud-processing technology generates and hosts fully immersive models from captured 2D and 3D data.3Share & EngageMatterport’s 3D Showcase allows anybody to interact with 3D models anywhere with just a browser. Technology Matterport Pro 3D Camera Capture any space with ease. MakerBot Industries Steps to Success Every now and then we’re reminded 3D printing is not science fiction, but a real technology used every day to make amazing things in homes, studios, schools, and businesses. At MakerBot we’re proud to be leading this Next Industrial Revolution with the MakerBot 3D Ecosystem, which makes desktop 3D printing and 3D scanning affordable and reliable for everyone, and includes a variety of products and services to help unleash your creativity. One of the newest members of our family is MakerBot Desktop, a complete, free 3D printing solution for discovering, managing, and sharing your 3D prints. As we learned in last week’s post on connectivity, MakerBot Desktop was built to access the powerful software capabilities of the new Fifth Generation line of MakerBot Replicator Desktop 3D Printers. This week, we’ll take a look at how to use it to go, in just three simple steps, from a 3D design to a 3D print. 1.

3D Printing DIY 3-dimensional additive fabrication and personal manufacturing are rapidly expanding areas of exploration for hobbyists, amateur engineers, tinkerers and Maker-folk. The development aims to provide an alternative or complement to capital-intensive mass manufacturing for individual-level consumption, and also aims to empower the individual in the design and creation of their own goods. Because of the involvement of many demographics including said amateur engineers and hobbyists in this “research”, potential breakthroughs for the additive fabrication industry as a whole are also promising. As the technology continues to evolve on a grassroots level, the quality of products and streamlining of the process should approach or overtake levels achieved by commercial additive fabrication machines while remaining accessible to persons interested in pursuing engineering as a hobby or profession. I mean, besides all that, I want my own 3d printer.

Blog: A new approach to printing metals There have been numerous attempts to print conductors. Fab@home, Ed Sells and myself have all tried it previously with very limited success. Whilst I've been able to print a basic circuit from solder, we were unable to achieve the resolution to produce anything but the most simplistic circuit board. Forrest Higgs and others have tried to identify a useful non-metallic conductive material but conductivity has always been fairly poor. Months ago I blogged about using Nickel Carbonyl powder for exactly this purpose. What I didn't blog about was an experiment I did mixing the nickel with a low melting point alloy.

The 3-D printing revolution has begun There’s a rite of passage for many entrepreneurs with a great product idea: Ship your design to China to get a prototype made on the cheap, and cross your fingers. Thanks to the increased accessibility of 3-D printing technology, Made In China is no longer the only option. In fact, 3-D printers are empowering entrepreneurs to design more innovative products at home, taking some mystery out of the process, and saving them time and money so they can better compete with larger companies.

DIY High Resolution 3D Printer Even though 3D printers have become mainstream and costs have declined, most cannot create a fine level of detail when printing. For rapid prototyping, you can fabricate one yourself such as the High Resolution DLP 3D Printer. Homemade yet still turns out impressive results. I'm building a WebGL modelling tool for 3D printing 2 weeks ago Father Christmas delivered a MakerBot Thing-O-Matic 3D Printer to my office. I think I understand how it must have felt to own an Altair 8800 back in the day when the world was on the brink of the consumer computing revolution. Consumer 3D printing could be another such revolution. But to print something in 3D you have to create a 3D model, and my survey of the software tools available for 3D modelling has been very disappointing.

GoldFish Alpha – Download – GoldFish is a CFD Solver for grasshopper written in C++ and C# I did this because C++ is fast enough to allow the user to interact with the problem and see updates in real time. It has been a long time since i wrote this but i have finally gotten around to getting it out there. Its initial release has limited functionality but there will be more to come. 3D Printers, FDM Prototyping, 3D Models Bring Performance Prototyping In-House The Dimension 1200es features the largest build envelope of any Stratasys Design Series performance 3D printer. Running on Fused Deposition Modeling (FDM) Technology, it prints in nine colors of real ABSplus thermoplastic. This 3D printer lets you choose fine resolution or faster printing, with layer thicknesses of 0.254 mm (0.010 in.) or 0.33 mm (0.013 in.).

: : Ultimaker Shop - Ultimaker 3D printer kit : : Details Usually ships with a 20 working day lead time. Build this machine and make your ideas come to life right on your desktop. The complete Ultimaker bundle includes everything you need to build your machine and to start printing. Features An extremely large build volume, 21x21x20.5 cm (L/W/H), while having a very desktop friendly footprint of only 35x35 cm. Technology - 3D printing: A new dimension to faking it Thanks to 3D printers, budding counterfeiters could soon create parts or goods themselves. The problem for authorities is that copying physical objects is not always illegal. Rolex watches, Burberry hats and other fake luxury goods are increasingly becoming small beer to ambitious counterfeiters. They are now thinking on a far grander scale – both in terms of size and the tools for the job. According to Der Spiegel, a “fake” copy of a Beijing office and retail development designed by London-based architect Zaha Hadid is already being built 900 miles (1,500km) away in Chongqing.