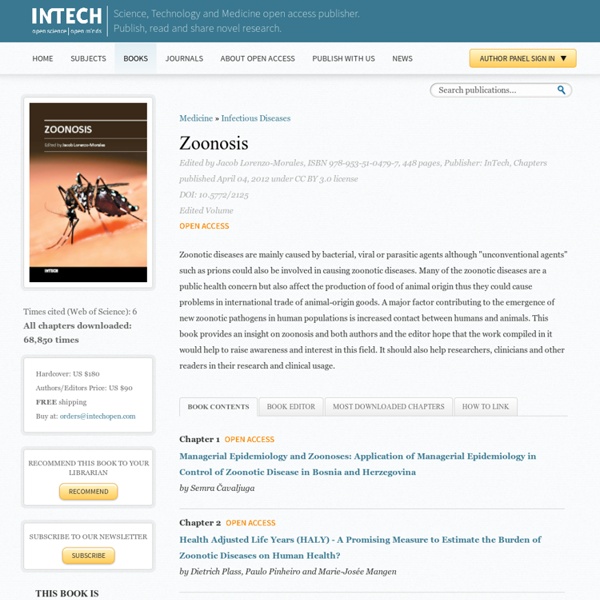 Edited by Jacob Lorenzo-Morales, ISBN 978-953-51-0479-7, 448 pages, Publisher: InTech, Chapters published April 04, 2012 under CC BY 3.0 licenseDOI: 10.5772/2125 Edited Volume Zoonotic diseases are mainly caused by bacterial, viral or parasitic agents although "unconventional agents" such as prions could also be involved in causing zoonotic diseases. Many of the zoonotic diseases are a public health concern but also affect the production of food of animal origin thus they could cause problems in international trade of animal-origin goods. A major factor contributing to the emergence of new zoonotic pathogens in human populations is increased contact between humans and animals. This book provides an insight on zoonosis and both authors and the editor hope that the work compiled in it would help to raise awareness and interest in this field. It should also help researchers, clinicians and other readers in their research and clinical usage.

INTECH - MARS 2012 - Au sommaire: Leptospirosis: Epidemiologic Factors, Pathophysiological and Immunopathogenic Edited by Alfonso J. Rodriguez-Morales, ISBN 978-953-51-0274-8, 576 pages, Publisher: InTech, Chapters published March 16, 2012 under CC BY 3.0 licenseDOI: 10.5772/1335 Edited Volume Tropical Medicine has emerged and remained as an important discipline for the study of diseases endemic in the tropic, particularly those of infectious etiology. Emergence and reemergence of many tropical pathologies have recently aroused the interest of many fields of the study of tropical medicine, even including new infectious agents. Then evidence-based information in the field and regular updates are necessary. Current Topics in Tropical Medicine presents an updated information on multiple diseases and conditions of interest in the field.

Tropical Animal Health and Production - 2012 - Serosurvey and molecular detection of Crimean–Congo hemorrhagic fever virus (CCHF In this study, the hard ticks, whole blood and serum samples collected from small ruminants (sheep and goat) in middle Black Sea region of Turkey where Crimean–Congo hemorrhagic fever (CCHF) human cases were observed in the past years were surveyed for the presence of RNA and specific IgG antibodies from CCFH virus (CCHFV). CCHFV RNA was found in 30 of 255 tick pools (11.76%) and nine of 105 (8.57%) leucocyte samples. No CCHFV genomic RNA was detected from animals in Yildizeli and Vezirkopru. However, CCHFV RNA was found from animals in Gerze and Resadiye.

CRESA - OCT 2011 - Elimination of bovine tuberculosis has been heterogeneous in Spain Despite control campaigns carried out since 1956, Bovine tuberculosis eradication has not yet been achieved and prevalence has remained between 1.6% and 1.8%. Researchers from the CReSA and UAB studied the success of these campaigns in Spain and concluded that the elimination pattern was not homogeneous throughout Spain and the ratio of elimination was different among zones. Relative risk of being positive in 2008

MICROBIOLOGY AUSTRALIA 18/09/13 Q fever: pets, vets and validating tests Download PDF Article Published: 18 September 2013 , A C A and B Q fever is a highly significant worldwide zoonosis caused by the bacterium Coxiella burnetii. While infection is commonly asymptomatic, 40% of primary infections in humans are symptomatic, with serious acute or chronic debilitating illnesses possible, including endocarditis, post-Q fever fatigue syndrome and recrudescent granulomatous lesions in bone or soft tissue1,2. The bacterium itself has a duplicitous lifecycle; a metabolically active form obligately replicates within the macrophage cell lineage while an inactive form has extreme environmental resilience, providing a means to travel to new cells and new hosts.

CDC EID - MARS 2014 - Crimean-Congo Hemorrhagic Fever among Health Care Workers, Turkey Author affiliations: Ankara Numune Training and Research Hospital, Ankara, Turkey (A.K. Celikbas, B. Dokuzoğuz, N. BMC Veterinary Research 2012, 8:100 Eradication of bovine tuberculosis at a herd-level in Madrid, Spain: study of within-herd tr Eradication of bTB at a herd level, which is prerequisite for disease eradication at a region and country level, has been impaired by the chronic nature of the disease that can lead to relatively long periods of “silent infection” in infected animals, especially at low infectious doses [8]. This feature of the disease, together with limitations in accuracy of the diagnostic techniques, can substantially extend the time needed for declaring a herd bTB free. Several studies have been published dealing with the identification of risk factors at an individual or herd level associated with bTB [6,7,13-15] or with the detection of predictors of future herd breakdowns in bTB free herds [16], but longitudinal studies aiming at elucidating the disease dynamics in infected herds under a strong eradication pressure such as the one presented here have not been published in the peer reviewed literature.