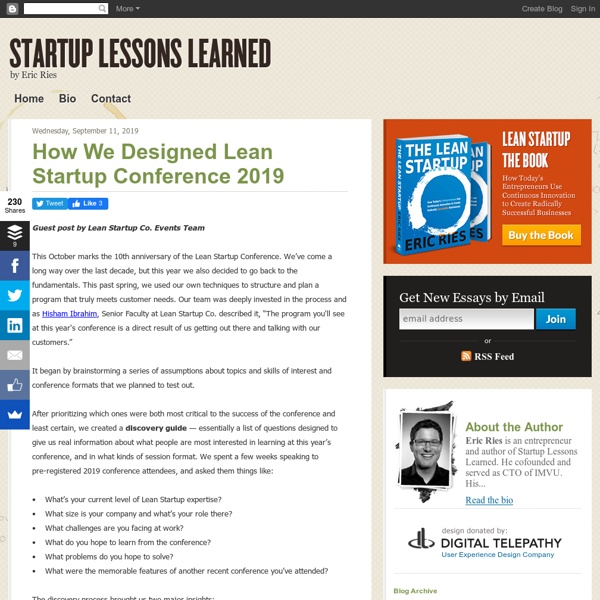 Guest post by Lisa Regan, writer for The Lean Startup Conference. Our fall webcast series concluded on a high note with three extraordinary conversations about the origins and implications of Lean Startup. If you missed these when they went out live, we encourage you to watch them now, as they lay a strong foundation for The Lean Startup Conference, December 9 -11 in San Francisco—less than two weeks from today. You can also listen to any of the webcasts, which, at the suggestion of a webcast attendee, we’ve turned into podcasts you can stream or download (from iTunes or SoundCloud). None of the webcasts included slides, so the audio versions work really well.

Digging Deeper into Lean Business Model Canvases I’m a big fan of Ash Maurya’s Lean Canvas. I was also very impressed with Steve Blank’s new initiative Lean Launch Lab, which combines a canvas business model tool and a blogging tool for startups to use and share information regularly with investors. If you haven’t seen it, check out his recent presentation: When the Boardroom is Bits. Both are very useful tools for designing a business model, and we’ve encouraged the startups at Year One Labs to use lean canvas and think about designing a business model vs. writing a business plan.

How to Create a Distribution Strategy ...That Banks by THOM HOLLAND How many times have you heard marketers talk about creating a distribution strategy? …You can probably count the numbers of times on one hand. The truth is, marketing “gurus” love to tell you how to promote your products. They get stuck on things like pay per click advertising and building a social media presence. Now, I enjoy talking about the marketing and sales process just as much as the next guy, however, there’s certainly much more to marketing than simply promoting your product.

Guide If you’re a visiting dignitary whose country has a Gross National Product equal to or greater than the State of California, your visit to Silicon Valley consists of a lunch/dinner with some combination of the founders of Google, Facebook, Apple and Twitter and several brand name venture capitalists. If you have time, the President of Stanford will throw in a tour, and then you can drive by Intel or some Clean Tech firm for a photo op standing in front of an impressive looking piece of equipment. The “official dignitary” tour of Silicon Valley is like taking the jungle cruise at Disneyland and saying you’ve been to Africa. Because you and your entourage don’t know the difference between large innovative companies who once were startups (Google, Facebook, et al) and a real startup, you never really get to see what makes the valley tick.

Blog « Categories « Lean Startup Machine What is Lean Startup? “Lean Startup” is a term coined by Eric Ries while an Advisor to the venture capital firm Kleiner Perkins. It’s based on the new management processes he employed while Chief Technology Officer at IMVU, one of Silicon Valley’s most successful startups. Downloads. GGobi data visualization system. The current version of GGobi is 2.1.10a, released 12 March 2010, and updated 10 June 2012 for 64 bit. Windows If you have an old version of GGobi, please delete it first Download and install GGobi for Windows (32 bit) (exe, 8.3 meg) or GGobi for Windows (64 bit) (exe, 8.3 meg) (Currently available for 10.5 only) Installing GGobi is a simple three step process: First, make sure you have X11 installed: look in Applications/Utilities.

How To Create A Brand With Values Brands That Are Born With Values The great stories of the oral tradition have always contained lessons encouraging people to pursue their higher values. In comparing myths across cultures and times to develop his "Hero’s Journey" model, Joseph Campbell found that higher values were the key ingredient to story success. Today, digital tools are spawning a new peer-to-peer oral tradition in communications. To succeed in this new digitally empowered oral tradition, marketers must heed the lessons of the past and orient their brands to higher human values--or face being ignored. Important Marketing Lessons From Outrageous Vintage Advertisements I absolutely love looking at old ads from the early to mid 20th century. The themes covered and claims that are made are often so completely outrageous that you wonder how they ever made it to print. Looking at these, you can’t help but marvel how far advertising has come. How much advancement have we really made in this area though? Aren’t the advertising ploys of past generations still the same tricks used by marketers today? Follow along as we take a look at some truly ridiculous ads and how they really aren’t so different from advertising we see today.

Startups Wiki: Ask YC Archive This pages is an archive of quality Hacker News "Ask YC" posts grouped by subject. "Quality" means posts that are a) generally relevant to startups and b) contain a decent amount of useful discussion/advice. All posts on this page have been looked at manually. Within groups (and sub-groups) stories are sorted in descending date order because newer stories are more timely (in addition to often having more comments). For a more up-to-date listing (that includes postings where this one left off), check out the Ask HN Archive. When referencing this page, don't copy and paste the links to table of contents sections, as they are numerically designated and thus subject to change.

Matlab Code by Mark Schmidt (optimization, graphical models, machine learning) Summary This package contains the most recent version of various Matlab codes I released during my PhD work. I would recommend downloading and using this package if you plan on using more than one of my Matlab codes. This is because this package includes all the more recent bug-fixes and efficiency-improvements, while in making this package I have updated my old code to make it compatible with the new code and newer versions of Matlab. Further, I typically do not update the individual packages unless I am making a major change (such as the updates of minFunc and UGM).

The OODA Loop: Playing chess with half the pieces Nivi · November 20th, 2008 You might know John Boyd as the OODA Loop guy. I never really “got” the OODA Loop so, based on Eric Ries’ recommendation, I read this book. In a software startup, the OODA Loop looks like this: (1) Come up with an idea, (2) Code it, launch it, (3) Learn from usage data. Keep repeating the loop, each time using the Learnings to influence your next idea. This is the Idea-Code-Data loop. 5 reasons why the UNTHINK Experiment is over – and 6 pieces of advice for new start-ups « interacter When I received an invitation to join the latest social network as it took its fledgling steps, I promised that I’d give it a month to see how it worked out. Fast forward six weeks – not only have I discontinued use but I’ve deleted my account as well. Here are the five reasons why – and some advice for future social media start-ups.Reason One: The technology wasn’t ready. When I originally blogged about UNTHINK, I criticised the load times. This hasn’t improved – today’s load for example took around 8seconds on IE over a 10mg broadband line.

The Art of Bootstrapping Someone once told me that the probability of an entrepreneur getting venture capital is the same as getting struck by lightning while standing at the bottom of a swimming pool on a sunny day. This may be too optimistic. Let's say that you can't raise money for whatever reason: You're not a “proven” team with “proven” technology in a “proven” market. Or, your company may simply not be a “VC deal”--that is, something that will go public or be acquired for a zillion dollars.