The Terrible Management Technique That Cost Microsoft Its Creativity 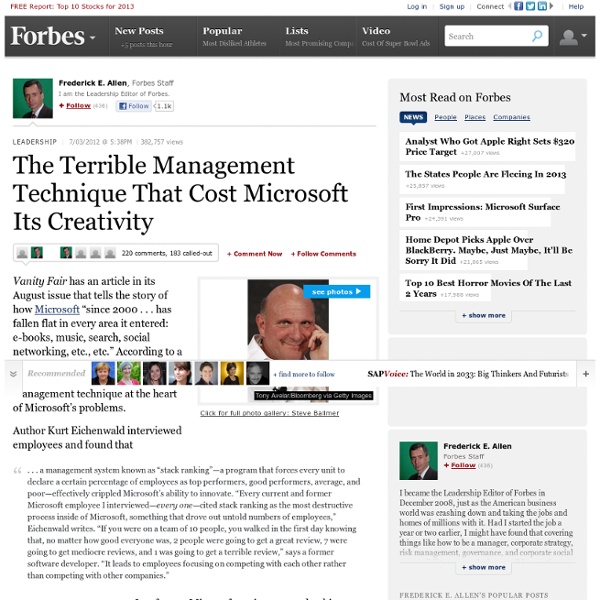 Welcome to the Bossless Company How to block Seen message on Facebook Chat? | The Lacuna Blog - Computer Tips, Tricks, Make Money Online Share some love, will you? Finally, here's a working tutorial to disable the SEEN message from appearing on Facebook chat. It was easier earlier to pretend as if you were offline, if someone you don't like to chat with started a conversation. But after the SEEN message started appearing, people don't usually do so. Your friends know that you have seen the message but still have not replied to it and that might not be the wisest thing to do. Don't worry though, here's a solution to the problem to prevent your friends from knowing that you have already seen the message. Follow this guide depending upon your browser. For Firefox Users : First of all, download and install this add-on (AdBlock Plus) on your browser. Now, look on the bottom of your browser. Go to Custom Filters tab and click on Add filter group button. Click on the Actions button and select Show/hide filters. Click on Add Filter button on the pane and paste this : /ajax/mercury/change_read_status.php$domain=facebook.com PS.

What Doesn't Motivate Creativity Can Kill It - Teresa Amabile and Steve Kramer by Teresa Amabile and Steve Kramer | 9:49 AM April 25, 2012 Management is widely viewed as a foe of innovation. The thinking goes that too much management strangles innovation (just let a thousand flowers bloom!). More than three decades of research have shown that people are most likely to be creative when they’re intrinsically motivated by the interest, enjoyment, satisfaction, and challenge of the work itself. Savvy managers know how to balance four factors, to properly motivate creativity and, ultimately, innovation: Goals Creativity suffers when strategic goals are too loose, and when creators are too tightly constrained in how they accomplish those goals. Evaluation In our research inside organizations, we have often observed reduced creativity under conditions of strong evaluation pressure. Reward We all need equitable, sufficiently generous compensation for our work, to avoid the distraction of financial worries, and to feel that we (and our work) are valued by our organizations.

Career Advice: Keep the Boss Happy My recent column, 8 Core Beliefs of Extraordinary Bosses, drew a flood of responses. But there's one thing I didn't mention: An extraordinary boss communicates his expectations clearly to his team. That way, everyone understands what it will take to make your company succeed. With that in mind: If you are the boss, you'll want to share this column with your team, because it will make your job a heck of a lot easier. And if by chance you're not the boss, memorize this column–because it contains the key to long-term success. Here are the rules for keeping your boss happy: 1. Your boss wants to trust you. 2. The secret fear of every boss is that employees are screwing up but are not saying anything about it. 3. Your boss wants to believe you're competent and on top of things. 4. Bosses appreciate individuals who truly care about what they do and willing to take the time to achieve a deep understanding of their craft. 5. 6. Complainers are the bane of your boss's existence. 7. 8.

Start Moving! Sitting Can Reduce Your Life Expectancy [STUDY] If you're sitting at a desk reading this on a computer screen, take note: reducing sedentary behaviors like sitting and watching TV may have the potential to increase your life expectancy, even if you get regular exercise. According to a study published in the online journal BMJ Open if you sit for more than three hours a day, your life expectancy is lowered by about two years. Throwing in a few hours of watching TV can add another 1.4 years. SEE ALSO: Fitness App Lets Charities Cash in on Your Exercise Routine That's enough to make someone stand up and take note! A recent study by Australia’s Sax Institute says even with exercise, sitting down for several hours a day could bring you to an early grave. Another study reported tracked 123,000 Americans and found the death rate for those who spent six or more hours a day sitting was 20% higher than for men who sat for three hours or less. SEE ALSO: Walk at Work: Treadmill Desk Could Make You Envy of Office So what can you do to get moving?

Life Lessons From Benjamin Franklin Benjamin Franklin was a man of action. Over his lifetime, his curiosity and passion fueled a diverse range of interests. He was a writer (often using a pseudonym), publisher, diplomat, inventor and one of the Founding Fathers of the United States. His inventions included the lightning rod, bifocals and the Franklin stove. Franklin was responsible for establishing the first public library, organizing fire fighters in Philadelphia, was one of the early supporters of mutual insurance and crossed the Atlantic eight times. Benjamin Franklin was clearly a man who knew how to get things done. 14 Action Inducing LessonsLess Talk, More Action “Well done is better than well said.”Talk is cheap. “Never leave that till tomorrow which you can do today.” This is probably one of the first quotes I remember hearing as a teenager. Be Prepared “By failing to prepare, you are preparing to fail.” You need a plan to accomplish your goals. Don’t Fight Change “When you’re finished changing, you’re finished.” Wise Up

Searching for Numbers: a Powerful Tool for Makers and Students Digital Tools Flickr: Mark Anderson At a recent conference, professor Kristin Fontichiaro described watching a seven-year-old work his way through do-it-yourself resources online. Because he was comparing concrete items (e.g., his circuit versus that in the tutorial), and not abstract concepts, the student immediately understood what was a credible resource and what was not. Although the task was about building a circuit, the student was also demonstrating meaningful, informed judgments about the quality of a given source, and understanding clearly what the impact of a quality resource would be on his final project. In the same way, using advanced operators when searching online can help students and makers zero in on exactly what they’re searching for. Another powerful operator for making and other pursuits comes from placing two dots between two numbers. Take a look at these search results for the query [makerfaire 2006..2010]. Related Explore: Number Range Search

To Encourage Innovation, Eradicate Blame There is a big difference between identifying the cause of a negative outcome and looking for someone to blame it on. Identifying the cause of a negative outcome is productive. You can use that information to avoid the situation in the future and also help people take responsibility for fixing it and moving on. Finding fault and assigning blame, on the other hand, creates a situation where people become stuck and paralyzed. We know that the most innovative environments are those where people are allowed to learn from past mistakes, grow, develop, and improve. It’s also the approach used by WD-40 Company--manufacturers of the ubiquitous “water displacement” product of the same name--whose closely guarded formula was discovered on the 40th try back in 1953. As CEO Garry Ridge has describes it, part of WD-40’s ongoing success with innovation can be traced back to a culture where employees share the positive and negative outcomes of any situation. Consider your impact as a leader.

8 Rules For Creating A Passionate Work Culture Several years ago I was in the Thomson Building in Toronto. I went down the hall to the small kitchen to get myself a cup of coffee. Ken Thomson was there, making himself some instant soup. At the time, he was the ninth-richest man in the world, worth approximately $19.6 billion. Thomson understood value. In 1976, Thomson inherited a $500-million business empire that was built on newspapers, publishing, travel agencies, and oil. He left both a financial legacy and an art legacy, but his most lasting legacy might be the culture he created. For the long-term viability of any enterprise, Thomson understood that you needed a viable corporate culture. Thomson created a culture that extended out from him and has lived after him. 1. Hire for passion and commitment first, experience second, and credentials third. 2. Once you have the right people, you need to sit down regularly with them and discuss what is going well and what isn’t. 3. 4. To obtain passion capital requires a work ethic. 5.