6 Fascinating Underground Homes That Go Above and Beyond 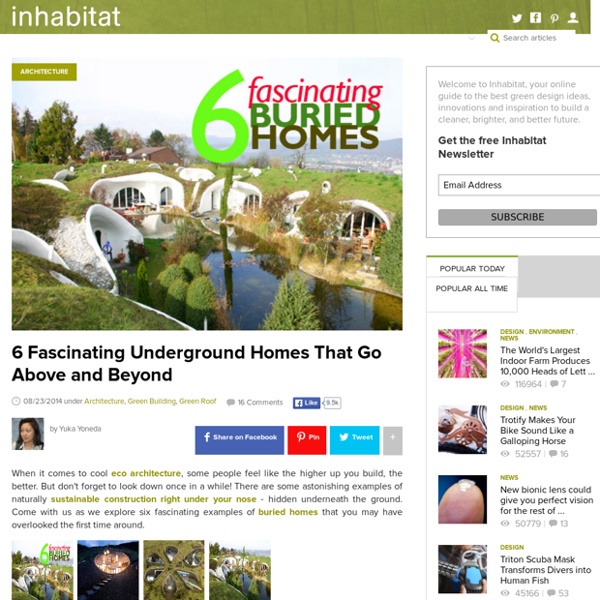 When it comes to cool eco architecture, some people feel like the higher up you build, the better. But don't forget to look down once in a while! There are some astonishing examples of naturally sustainable construction right under your nose - hidden underneath the ground. Come with us as we explore six fascinating examples of buried homes that you may have overlooked the first time around. Unlike other homes whose goal in life is to stick out like a sore thumb (read: that guy on your block who strings up enough holiday lights to cause a neighborhood blackout), this clever dwelling was made specifically so that it would blend in perfectly with the breathtaking landscape in Vals, Switzerland. If new construction isn’t really your thang, how about really, really old construction? Peeking out from underneath bumpy layers of greenery, this amazing abode looks more like something out of a fairy tale than real life. Related:  Subterranean & Earth Sheltered

Beautiful Green-Roofed Barn Extension in France is Barely Visible From Afar This barn extension in the Pyrénées Mountains has a gorgeous green roof that minimizes its impact on an incredible site overlooking the Adour de Lesponne river valley in France. When the client commissioned PPA Architects to extend the original stone barn building that once stood alone on this enviable pastureland, they made it clear that the existing site and vernacular architecture had to be preserved at all costs. So the firm tucked the new holiday home into the side of the slope and gave it a deceptive log facade wrapped in steel, ensuring that the extension is barely visible from afar. The new extension consists of a guest room, a multi purpose room, a utility area, and a garage. Typical of the architecture in this historical agricultural region, it is nestled into the side of the slope for both insulation and fiscal purposes. This storage area is quite deceptive. + PPA Architects Via Arch Daily

Les moutons enragés - Les moutons en ont marre, ils s'informent! Bed-making is a breeze with the Zip Bed Italian furniture design company Florida has created the perfect bed for those mornings when you just want to grab a coffee and run out the door. All that you have to do is simply get out and zip it up – no more making your bed in the morning. At night, you just unzip it and climb back in. View all The padded frame of the bed has been designed with soft fabrics from Emmecia and comes in three color options for the base; white, gray or navy blue. Prices for the Zip Bed are yet to to be released. Via: Trendir About the Author Bridget is an experienced freelance writer, presenter and performer with a keen eye for innovative design and a passion for green technology. Post a CommentRelated Articles Just enter your friends and your email address into the form below For multiple addresses, separate each with a comma Privacy is safe with us because we have a strict privacy policy.

Lush Green Walls Protect a Pond-Topped Sunken Chapel in Mexico The clients visited BNKR Arquitectura‘s La Estaancia Chapel in Cuernavaca and loved the feel of it, so they asked the firm to design a private chapel for their own yard at their home. They asked for the chapel to be non-religious and discreet, but also a spectacular space where they would feel something special while inside. The result is a sunken chapel that is barely visible from the house and the yard. In fact, the roof is made to look like a pond that is part of the landscape. Related: BNKR Arquitectura Builds an Entire Pavilion from 5,000 Recycled Coca-Cola Crates As visitors approach the chapel, they see a downward spiral and blooming flowers that direct them down into the space. + BNKR Arquitectura Images ©Jaime Navarro Related: Ethereal Rio Roca Ranch Chapel is a Wooden Church Filled with Air and Light

Great earth house designd by Vetsch architektur Advertisement This is a great earth house designed by Vetsch architektur in a very special way as you can see from the picture. Lättenstrasse house is located in Dietikon, Switzerland and it has an amazing architecture. Here is the description of the architect: Technical data: Earth House Estate Lättenstrasse Location: Dietikon, SwitzerlandSize of lot : 4000 m2 totalLiving space : 60 m2 bis 200 m2 per houseCubature: 1500 m3 bis 2200 m3 per house This settlement finds itself in contrast to the surrounding of traditional single houses. Source: erdhaus

Baby Panda Born At Taipei Zoo, Yuan Zai, Meets Mom For The First Time (VIDEO, PHOTOS) In this photo taken Wednesday, July 11, 2012 and made available Sunday, July 15, 2012, the younger of a pair of twin giant panda cubs born at the panda research center in Wolong rests in southwest China's Sichuan province. (AP Photo)A worker shows of one of the baby pandas at the Giant Panda Research Base in Chengdu, southwest China's Sichuan province on June 24, 2012, to attract visitors for the Duanwu festival or better known as the Dragon Boat festival. China engages in 'panda diplomacy', using the endangered but iconic bears as diplomatic gifts to other countries, and also runs a lucrative trade hiring the animals out to foreign zoos, as only around 1,600 remain in the wild in China, with some 300 others in captivity. AFP PHOTO BEAUVAL, FRANCE - JANUARY 25: Yuan Zi, a male giant panda and Huan Huan, a female giant panda, share their life inside their enclosure at Zoo Parc De Beauval on January 25, 2012 in Beauval, France.

How to Design the Apple iPad in Photoshop With the release of the Apple iPad, we all knew it wouldn’t take long for the first tutorial on how to recreate it would appear on the net. In this tutorial, you’ll be learning how to design the Apple iPad in Adobe Photoshop. We’ll be using various different tools, such as shape tools, gradient tools, different blending mode tools and loads of great techniques. Let’s get started! Tutorial Outcome At the end of this tutorial, you should have something that looks like the image at the top of this post. Step 1 As in any tutorial, we firstly need to create a new document. Step 2 Change your Background Layers background color to a dark grey – as we’ll be working with a light grey color to begin with, this just makes it easier. Grab the Rounded Rectangle Tool and change the corner radius to 25px. Make another New Layer and call it ‘iPad Screen Border’. Make yet another New Layer and call it ‘iPad Screen’. Step 3 So far we have a very simple shape of the Apple iPad. Step 4 Step 5 We’re almost there!

Gigantic Airship Hangar Transformed Into Tropical Island Resort This supermassive hangar once housed gigantic airships, and now it has been given a second life as an indoor tropical resort that holds the world's largest indoor pool and water park. Located in the countryside between Dresden and Berlin, the building was modified to bring in lots of sunlight and the huge doors were welded shut to keep in the heat -- even during the snowy German winter. Inside, a small oceanside village gives visitors a tropical escape. The dome is the world’s largest freestanding building, and it was originally owned by a company attempting to develop a transport dirigible. If you like big numbers, this project has some jaw droppers — the roof is 70,000 square meters, the indoor pool is the size of four Olympic sized pools, and the interior holds 5 million cubic feet of space. This is a spectacular reuse of a unique building for a novel purpose in the heart of Europe, and we love the imagination it took. + Tropical Islands

Underground Homes: How To Get Started, Part 1 - Green Homes The Emergence of Underground Homes Underground homes, or earth shelters as they are technically called, are gaining in popularity..even more now than they ever have. It used to be that only a certain group of people wanted to live in earth shelters and that has changed. Many towns around the country have an underground house that is tucked away in a neighborhood or located just outside of the city limits. That is the point when I get an email from someone around the country that is looking at building an earth shelter/earth berm/underground home. It is tough to figure out where to start when it comes to building an earth shelter. I always ask those who email me about building or consulting on earth shelters to send me pictures of their land. We are just finishing up a project that is an earth bermed house, with berms just below the soffit on three sides of the house. We have barely scratched the surface of what you should do to get started in your quest for an underground home.