Guru.com – Find Freelancers for Hire. Get Your Project Done. 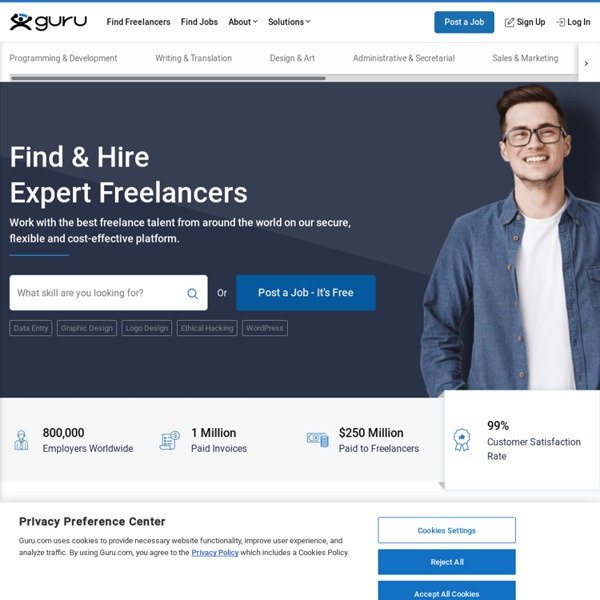 Discover the finest freelancers online. Post a Job (FREE) Want a Job? Join Now Watch how it works Close Video Pay for Work Pay only for work you approve.

Domain Name Contests Latest Name Contest Winners Domain Name Contests Hold a Domain Name Contest Get Started Latest | Aftermarket | Popular | Expiring | Closed 123 names 26 keywords 50 votes Public Driving School software Created 12 hours ago. Five Apps to Sell Smartphone Photos - Work From Home Happiness I’m gonna be honest. I have just over 1,000 pictures on my smartphone. That does not even account for the ones that I have removed and stored in my Amazon Cloud Drive for safekeeping, you know, just in case I need photographic evidence of the fancy meal I ate on March 3rd, 2012. I suspect, if you are a smartphone owner, you probably have a pretty impressive collection of selfies, food shots, scenic pics, and social snaps you have collected over the years, too. Actually, it’s kind of hard not to amass a large collection of smartphone photos.

Working From Home: Online business ideas for introverts To be successful in the modern workplace a person needs good communication skills and the ability to interact well with their colleagues. But what about people who are not good at these things? Those who are naturally more introverted might prefer to work alone, but that can put them at a disadvantage in environments where close collaboration with others is necessary. Fortunately the web has helped to provide more career options for introverts. As well as the ability to work remotely in a lot of jobs, there are numerous opportunities to become self-employed by building web-based businesses which require minimal interaction with other people. Affiliate marketing

About Here at Elance, things work differently. They just do. For one thing, businesses get lots of great work done fast and affordably. Plus freelancers here love their work and love the freedom to enjoy life. Pretty novel approach to the old working world, eh? 35+ Best Wireframing Tools and Templates With wireframing tools and templates you can work efficiently and flexible with website designs in the early phases where features and requirements are still being developed. As you know, a good start is often half done. In web design, it is tempting to start out pixel perfect design as early as possible and ship the PSD for being sliced and converted into HTML. However, best practice is to keep the level of detail in the design to an absolute minimum until you are clear on all the features and page elements. Once a design is drawn in Photoshop, it takes a lot of effort to make large turnarounds. Starting out here or moving in too early simply introduce a risk that you have to turn down creativity and new ideas.

Other Season Leaderboard A Tongal Season is an ongoing program to award the top-performing creators for their high-quality participation across a series of projects. Get Points Finish in the top five for an eligible project and earn Season Points. Help Wanted Hotline - Georgia Department of Economic Development Thank you for visiting the Georgia Film, Music & Digital Entertainment Help Wanted Hotline page. Find up-to-date job information for film and television projects happening throughout the state. Please submit your resume to the production companies directly at the link provided, and put the department/job title you are applying for in the subject line of the email. Updated May 2, 2017. Studio audience members needed for the daytime court TV show “Lauren Lake’s Paternity Court” Season 5. Tapings will take place in Atlanta, GA from April – November 2017.

Teleworking from Home Teleworking involves working at a distance from a usual place of work, often passing work between locations through the Internet. Work may be sent from one office building to another, from a worker's home to a central location, from a telecottage, or from a mobile location such as a salesman's car [1]. Home working is working from one's own home, and can involve anything from hand-knitting jumpers to installing a high technology workshop in your garage. The number of people involved in this section of the workforce is growing, with an estimated 563,000 teleworkers in the UK in 1994, making up 1.21% of the workforce [2]. Several associations, both national and international, have been formed to represent the sector [3,4] and various awareness programmes have been produced [5,6,7]. One key aim of these is to reduce pollution by reducing commuting.

International Ideas Exchange for Clients & Creatives Well the simple answer is that for clients, Idea Bounty is the simplest way to hire 1000s of creatives and only pay for the Ideas you want. For creatives it's an amazing platform that allows you to pitch on various briefs. The bottom line: Clients get the best Ideas and creatives get paid for those Ideas. Brilliant, yes? Coding Goûter This is part of a short series of articles on Coding Goûter. Read them on ils.sont.la Coding Goûter – “Goûter” being the french for a children afternoon snack – is a monthly event where children and their parents put their hands on various programming tools, algorithmic games and puzzles, development environments, languages. And as it’s an afternoon snack, we eat cakes and candies throughout the afternoon!

Crowdsourcing Crowdsourcing is the practice of obtaining needed services, ideas, or content by soliciting contributions from a large group of people, and especially from an online community, rather than from traditional employees or suppliers.[1] This process is often used to subdivide tedious work or to fund-raise startup companies and charities, and can also occur offline.[2] It combines the efforts of numerous self-identified volunteers or part-time workers, where each contributor of their own initiative adds a small portion to the greater result. The term "crowdsourcing" is a portmanteau of "crowd" and "outsourcing"; it is distinguished from outsourcing in that the work comes from an undefined public rather than being commissioned from a specific, named group. Definitions[edit] In a February 1, 2008 article, Daren C.

The best 5 production tracking tools for CG artists This article is produced in association with Masters of CG, a contest for creatives in partnership with HP, Nvidia, and 2000 AD. Check out the shortlisted entries here. There are no shortage of project management and calendar tools on the internet. Most of these, however, are not particularly useful if you're a CG artist. Our asset tracking of 3D models, image sequences and compositing projects is a bit too complex for a lot of the simpler tools to handle. This means that in many cases, we end up relying on an email- and project folder-based approach. promoting and supporting anywhere working For two decades we've been promoting the benefits of teleworking for individuals and organisations. What is meant by 'teleworking' has changed over the years. In the early 1990s it was mostly about people in rural areas working in telecentres, often doing data processing jobs, as a way to bring work to disadvantaged areas. As technology became cheaper and more accessible teleworking came to mean people working at or from home wherever they lived and embraced communication and collaboration not only across miles but often across continents. As technology has made even greater leaps over the last few years, and expectations of work have changed, 'teleworking' has evolved to mean "anytime, anywhere" working.

Great chance to learn about something new. Adding Guru.com to my list of resources to explore. by williamellerbe Oct 2