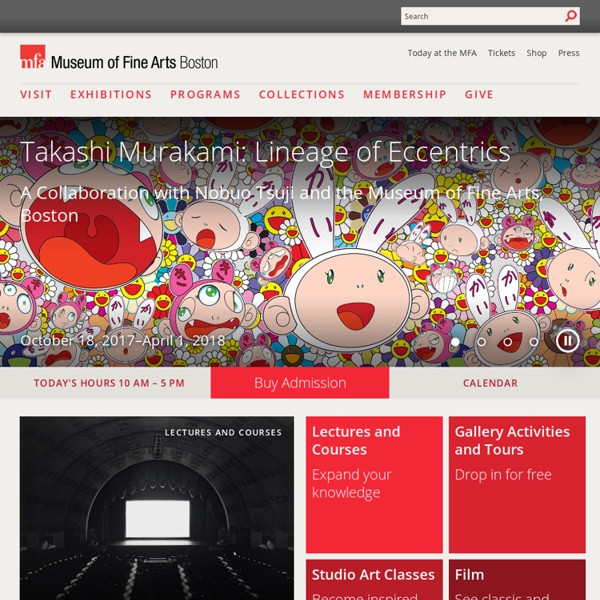 Molecular Expressions Microscopy Primer: Introduction to Microscopy Introduction to Optical Microscopy,Digital Imaging, and Photomicrography This treatise on optical microscopy is divided into several sections that are available through the links displayed immediately to the left (in the darker navigational boxes) and below. In order to print the entire microscopy primer as a paper document, you must download each link independently, send the file to your printer, and put the results together.

National Gallery of Art NGAkids CD ROMs Eight new NGAkids CD-ROMs are available through the Gallery's LEARNING RESOURCES portal. If you are having compatibility issues or if you prefer using our art activities offline, we invite you to register and borrow these free CDs. Jørn Utzon – Google Cultural Institute Architect Jørn Utzon is best known for his design of the Sydney Opera House, a building that transformed the identity of a nation to become the symbol of Australia, recognised the world over. Sydney Opera House is a World Heritage-listed masterpiece of human creativity and one of the greatest buildings of the 20th century. Like many architects, Utzon had initially entered the Australian competition for a national Opera House to exercise ideas.

Moscow Museum of Modern Art Moscow Museum of Modern Art is the first state museum in Russia that concentrates its activities exclusively on the art of the 20th and 21st centuries. Since its inauguration, the Museum has expanded its strategies and achieved a high level of public acknowledgement. Today the Museum is an energetic institution that plays an important part on the Moscow art scene. The Museum was unveiled on December 15, 1999, with the generous support of the Moscow City Government, Moscow City Department of Culture. Its founding director was Zurab Tsereteli, President of the Russian Academy of Arts.

Guggenheim International Exhibitions Sopheap Pich, Morning Glory, 2011. Rattan, bamboo, wire, plywood, and steel, 533.4 × 261.6 × 188 cm. Solomon R. Global Diversity and Phylogeny of the Asteroidea (Echinodermata) Discussion Fossil History Recent views on the most likely Paleozoic source for post-Paleozoic asteroids differ significantly [4], [5], [6], [111], but authors agree that the Paleozoic-Mesozoic transition marked a time of major extinction and re-diversification, thereby allowing separation in this paper based on time. Although the paper focuses on the Asteroidea, it is necessary to touch briefly on the origins and diversification of all early stellate echinoderms. Subdivisions of Paleozoic stellate echinoderms All three recognized groups of radiate echinoderms or “Asterozoa,” the surviving Asteroidea (Fig. 1B–G) and Ophiuroidea and the extinct Somasteroidea (Fig. 1A) [112], first appeared in the fossil record during a comparatively brief interval of the Early Ordovician.