Earthables - 10 Amazing Facts About The Human Body. How to Convince Someone When Facts Fail. Have you ever noticed that when you present people with facts that are contrary to their deepest held beliefs they always change their minds? 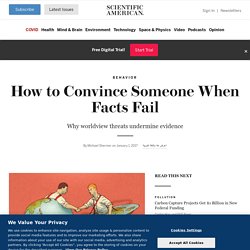 Me neither. In fact, people seem to double down on their beliefs in the teeth of overwhelming evidence against them. The reason is related to the worldview perceived to be under threat by the conflicting data. Creationists, for example, dispute the evidence for evolution in fossils and DNA because they are concerned about secular forces encroaching on religious faith. Uk.businessinsider. Mitch and Greg from AsapSCIENCE sat down with Tech Insider to explain their experiment with the 36 questions. 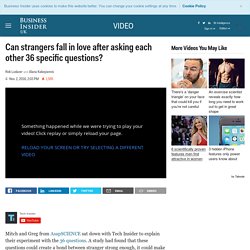 A study had found that these questions could create a bond between stranger strong enough, it could make them fall in love, and AsapSCIENCE put it to the test. Here's the full list of 36 questions are below, and here are AsapSCIENCE videos on their YouTube channel. Set I 1. Given the choice of anyone in the world, whom would you want as a dinner guest? 2. 3. 4. 5. 6. 7. 8. 9. 10. 11. 12. Set II 13. 14. 15. 16. 17. Comment les rayons X voient à travers votre peau - Ge Wang. Chipping Campden - Les Cotswolds - Love GREAT Britain. GOOD - The World's Deadliest Animal.

Success. And Science’s Breakthrough of the Year is … This Much Will Kill You. Oldest Known Message-In-A-Bottle Found. A postcard placed in a bottle and thrown into the North Sea more than a century ago has been found and returned to the scientific institution responsible for its distribution. 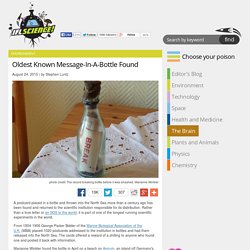 Scientists Reveal Birth Date Of Earth's Inner Core. The inner core of our planet is notoriously difficult to investigate, being that it is over 6,300 kilometers (roughly 4,000 miles) away from us. 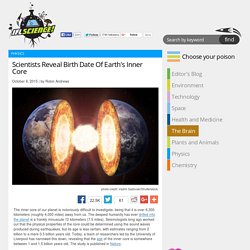 The deepest humanity has ever drilled into the planet is a frankly minuscule 12 kilometers (7.5 miles). Seismologists long ago worked out that the physical properties of the core could be determined using the sound waves produced during earthquakes, but its age is less certain, with estimates ranging from 2 billion to a mere 0.5 billion years old. Today, a team of researchers led by the University of Liverpool has narrowed this down, revealing that the age of the inner core is somewhere between 1 and 1.5 billion years old. The study is published in Nature. The inner core is our planet's deepest layer. The interaction of the static inner core with the swirling outer core generates the Earth’s magnetic field, which protects life from dangerous levels of solar radiation.

MinutePhysics. Common Science Myths That Most People Believe. There are a number of old wives’ tales out there regarding some basic scientific principles. 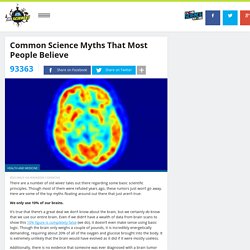 Though most of them were refuted years ago, these rumors just won’t go away. Here are some of the top myths floating around out there that just aren’t true: We only use 10% of our brains. It's true that there’s a great deal we don’t know about the brain, but we certainly do know that we use our entire brain. Even if we didn’t have a wealth of data from brain scans to show this 10% figure is completely false (we do), it doesn’t even make sense using basic logic. Additionally, there is no evidence that someone was ever diagnosed with a brain tumor but was told: “Great news! Six Mysteries Solved By Science. While there are some mysteries that scientists have not yet unraveled, there are some myths and legends that seem to persist even after an explanation has been provided. 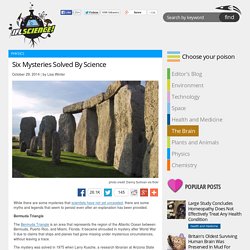 Bermuda Triangle The Bermuda Triangle is an area that represents the region of the Atlantic Ocean between Bermuda, Puerto Rico, and Miami, Florida. It became shrouded in mystery after World War II due to claims that ships and planes had gone missing under mysterious circumstances, without leaving a trace. Take the weekly quiz on levitating objects, mysterious fish migrations, and more! American eel. 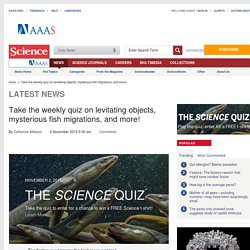 For more than a century, every sailor worth his salt knew that somewhere in the shallows of the Sargasso Sea, home to the infamous Bermuda Triangle, the eels spawned. But how did they get there? For the first time, scientists have tracked American eels all the way from their freshwater haunts in Nova Scotia, Canada, to their salty spawning grounds, nearly 1600 kilometers to the south. Using tracking devices that measured water temperature and depth, the scientists found that the eels migrate in two phases: First, they wriggle back and forth between the surface waters and the bottom along the continental shelf, possibly sampling the salinity and temperature of deeper waters to figure out their location.