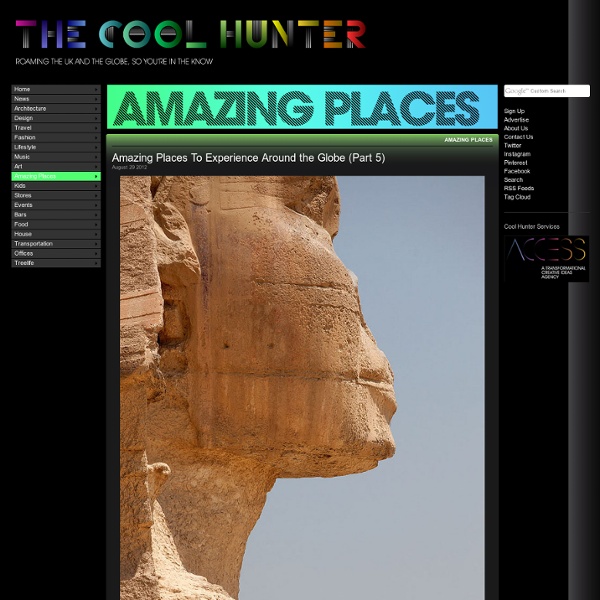 The adorable “sea bunny” - a nudibranch It’s round, and fluffy and has wiggly little ears! Sort of. These little sea creatures, affectionately dubbed “sea bunnies” have recently become social media celebrities. Try This! Easy Homemade Ginger Ale We have had an epiphany. And it’s called homemade ginger ale. You have to try this. We’ve made a version of this before using homemade ginger syrup, but this is a whole different ball game. This recipe from Crumpets and Cakes has you combine grated ginger, sugar, lemon juice, water, and a pinch of baker’s yeast in a 2-liter bottle. That little bit of yeast is all that’s needed to get this concoction nicely fizzy. This Damn Beautiful Autumn - Fall in Photographs You could easily argue that autumn is the most beautiful season of the year. Leaves turn to yellow, orange, and bright shades of crimson. They fall like a shower from the trees, giving us a way to watch the wind dance. They paint the landscape with a blanket of color. Don’t believe me? Take a look at these fall photos and tell me if you’ve ever seen more beautiful sights.

Nudibranchs - The Flamboyant Sea Slug nicoboxethai/CC BY 2.0 Nudibranch, or what we usually call sea slugs, blow my mind. Ever since spotting one for myself during a tide pool trip about a year ago, I've been fascinated with these creatures. I think of them as the drag queens of the sea: flashy stand-outs that are always dressed to the nines. The one I found is a Hermissenda crassicornis -- the flashy little thing pictured below with bright pinkish-orange cerata waving like a feather boa and neon blue outlines around its tentacles.

On Your Mark, Get Set, Grow: A Guide To Speedy Vegetables Sprouting broccoli will serve up florets in about 50 days. Not bad for this member of the brassica family. Laura Whitehead /Flickr hide caption itoggle caption Laura Whitehead /Flickr Sprouting broccoli will serve up florets in about 50 days. Ama - The Pearl Diving Mermaids of Japan (Warning: Nudity) - Gakuranman One of the lesser-known but fascinating parts of Japanese culture is that of the Ama pearl divers. Ama (海女 in Japanese), literally means ‘woman of the sea’ and is recorded as early as 750 in the oldest Japanese anthology of poetry, the Man’yoshu. These women specialised in freediving some 30 feet down into cold water wearing nothing more than a loincloth.

Beautiful World of Sea Slugs-click on pic On land, slugs are far from nature's most beautiful creatures--but underwater, the family of shell-less creatures known as nudibranchs come in bright neons, glowing pastels, and vibrant primary colors. The 3,000 different kinds of nudibranchs get their color from the food they eat--and, in some cases, secrete the poisons from their prey to defend themselves against predators. The Fried Egg Nudibranch gets its name from the perfect yellow-and-white circles that line its back. Dietary Flavanols Reverse Age-Related Memory Decline - Columbia University Medical Center Digital Materials: Video (1:58), Image 1, Image 2, Image 3 Dietary cocoa flavanols—naturally occurring bioactives found in cocoa—reversed age-related memory decline in healthy older adults, according to a study led by Columbia University Medical Center scientists. A cocoa flavanol-containing test drink prepared specifically for research purposes was produced by the food company Mars, Incorporated, which also supported the research, using a proprietary process to extract flavanols from cocoa beans. Most methods of processing cocoa remove many of the flavanols found in the raw plant.