6 Things You Won't Believe Animals Do Just Like Us 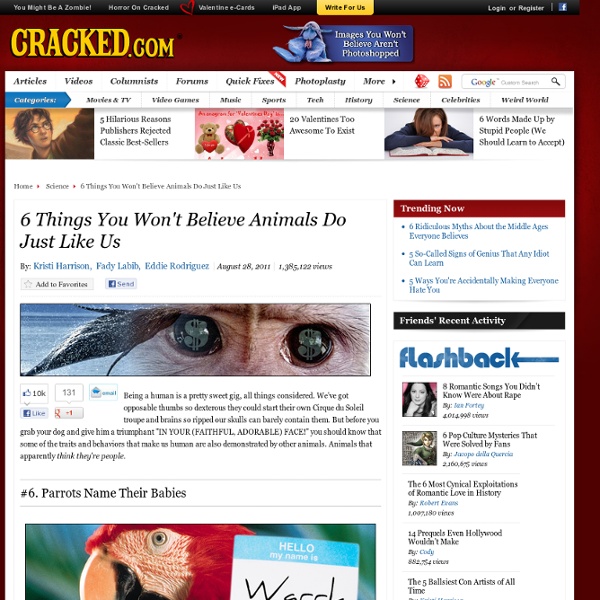 Being a human is a pretty sweet gig, all things considered. We've got opposable thumbs so dexterous they could start their own Cirque du Soleil troupe and brains so ripped our skulls can barely contain them. But before you grab your dog and give him a triumphant "IN YOUR (FAITHFUL, ADORABLE) FACE!" you should know that some of the traits and behaviors that make us human are also demonstrated by other animals. Animals that apparently think they're people. #6. What to name a baby is one of the first things that expecting parents obsess about. GettyAll babies look alike, even Theobold Pimpmeister here. And more than that, individual names also make humans special. "Never mind, Christine. Except the talking animals depicted in Disney movies aren't so far off the mark, at least when it comes to a few select species. Wait, what? Dolphins, crows, primates and parrots have all been observed using unique calls when they want the attention of specific members of their groups. Getty"GWAAK! Getty"Hi!

: freegan.info Vicky Collins: Can Dolphins Commit Suicide? Richard O'Barry gets misty eyed when he talks about Cathy. His beautiful girl died in his arms. Suicide he says. Cathy was a bottlenose dolphin, one of five he trained for the 60′s television hit Flipper. Her death in captivity at the Miami Seaquarium changed his world and set him on a course of activism. "I knew she was tired of suffering," O'Barry says. We were out on the water off Key West, Florida, working on a story for HDNet's World Report about this wild notion of animal suicide. But can captivity really cause a dolphin to commit suicide? Dr. Finally, we visited Dr. So at the end of the day did we find the answer to the question "Can Animals Commit Suicide?" For more information on Vicky Collins visit

6 Beneficial Things They Made You Stop Doing in School It's easy to think of a classroom as a battle of wills between kids who want to dick around all day and teachers who actually want to make them learn. But it's not that simple. A lot of the things that will get you yelled at in a classroom are, in fact, beneficial to learning. They're just really annoying to other people (and the teacher). Consider this the next time you hear ... #6. Getty Teachers must look at the cell phone as the modern plague on their profession. Getty"You can have it back at the end of the semester, if it doesn't sell on eBay." But teachers have a reason to hate texting above even other high-tech time-wasters like portable games. Everybody should stop and take a deep breath, because texting actually improves both your language skills and your ability to pay attention in class. Getty"Holly balls, I understand calculus!" Wait, What? Yes, you read that right. Mark van LaereIt's not Hemingway, but it is a form of literacy. Sounds counter-intuitive? #5. Right. #4.

Incredible Wildlife Photography | Peachy Green Wildlife — By Stephanie on January 11, 2010 at 10:58 am Canada goose protects her young Ever have one of those moments when you think to yourself, “Boy, I wish I had my camera?!” Well, you can enjoy the good fortune of the photographers who were not empty handed when they shot these amazing animal pictures. These high-speed images are treasures that tell stories we rarely get to see – let alone capture – in stunning detail. Incredible wildlife photography like this takes a steady hand and sharp eye. Bringing home the bugs.... If you oohed and ahhed over the first couple of pictures, you might have to prepare yourself for the next image…. open wide! All in one bite? The best wildlife photography is often expressed through the unexpected. Hey! What is more adorable than a curious monkey – particularly one that wonders what all the photography fuss is about? Among cute animal photographs, you’ve gotta agree… this one tops the charts! Ready for my close-up! Synchronized stretching Owls in a fir tree

This Is What Happens When You Give a Puppy An Adult Doggy Water Dish! Video Log in Comedy: Caught on Tape Michael Kaufman This Is What Happens When You Give a Puppy An Adult Doggy Water Dish! Dethan is just a cute little puppy who likes things the way they are. posted 3 years ago © 2014 Redux, Inc. about redux | contact us | copyright | legal California woman swears off mirrors for a year Kjerstin Gruys likes her legs now — and the feel of her cheeks as she applies makeup. Even perfumes smell better, she says, since she stopped looking in mirrors six months ago. Last March, the 28-year-old PhD student embarked on a year-long project, banning herself from gazing at her own reflection — no mirrors, no reflective surface at all. Denied access to her own reflection Gruys says she has become happier with her own appearance. She’s paying less attention to her soft tummy, which used to consume her. And she’s started to admire her strong legs, earned from years of running. Gruys, who suffered from eating disorders in high school and college, blames mirrors for many body image issues. Too many women are obsessed with their image, she says, quoting a British study that revealed that women spend the equivalent of five days each year staring, often critically, at their own reflection. She later posted on her blog, “At some point my dress search stopped being fun.

8 Reasons Young Americans Don't Fight Back: How the US Crushed Youth Resistance The ruling elite has created social institutions that have subdued young Americans and broken their spirit of resistance.Bruce E. LevineAlterNet Traditionally, young people have energized democratic movements. So it is a major coup for the ruling elite to have created societal institutions that have subdued young Americans and broken their spirit of resistance to domination. Young Americans—even more so than older Americans—appear to have acquiesced to the idea that the corporatocracy can completely screw them and that they are helpless to do anything about it. How exactly has American society subdued young Americans? 1. There was no tuition at the City University of New York when I attended one of its colleges in the 1970s, a time when tuition at many U.S. public universities was so affordable that it was easy to get a B.A. and even a graduate degree without accruing any student-loan debt. 2. 3. 4. 5. 6. The fear of being surveilled makes a population easier to control. 7. 8.

The Acceleration of Addictiveness July 2010 What hard liquor, cigarettes, heroin, and crack have in common is that they're all more concentrated forms of less addictive predecessors. Most if not all the things we describe as addictive are. And the scary thing is, the process that created them is accelerating. We wouldn't want to stop it. No one doubts this process is accelerating, which means increasing numbers of things we like will be transformed into things we like too much. [2] As far as I know there's no word for something we like too much. The world is more addictive than it was 40 years ago. The next 40 years will bring us some wonderful things. Most people won't, unfortunately. These two senses are already quite far apart. Societies eventually develop antibodies to addictive new things. As knowledge spread about the dangers of smoking, customs changed. It took a while though—on the order of 100 years. In fact, even that won't be enough. Most people I know have problems with Internet addiction. Notes

5 Insane Ways Words Can Control Your Mind On some level we already know that language shapes the way we think. We're automatically more afraid to fight a guy named Jack Savage than somebody named Peewee Nipplepuss, even if we've never seen either of them before. It's totally illogical, but you probably run into an example of that every day, and don't notice it. While we tend to think words are just sounds we make to express ideas, science is finding that language is more like a fun house mirror, warping what we see in mind-blowing ways. Speaking English Makes Us More Likely to Blame People Let's say your roommate Steve is jumping on your bed. How will you answer? Keep in mind, Steve pulls this shit all the time. The answer largely depends on what language you speak. Stanford scientists did experiments on this, by having speakers of various languages watch videos featuring, in various situations, people breaking eggs or popping balloons, sometimes on purpose, sometimes on accident. "Maybe it's a kid-friendly version of Jackass?"

5 Mind Blowing Things Crowds Do Better Than Experts There's nothing stupider than a crowd. Take an average, intelligent person and put him in an emergency and he'll likely remain calm and await instructions. Put him in a crowd and he'll start screaming, looting and overturning cars. Right? Well ... not really. "Crowdsourcing" is one of those business buzzwords that actually represents something very simple: letting crowds of strangers do your work for you. #5. Obviously, no random StarCraft or Tower Defense-playing teenager is going to know more about military strategy than a trained professional with combat experience. But what if you created a war game that mimicked the "rules" of actual war -- the units have the same capabilities of actual units, the map is similar to an actual map and all of the real-world complications have to be dealt with. It would be like Ender's Game, but with more homoerotic subtext. It's not just some war gamer geek's dream -- the military is betting on it. The U.S. Wikipedia"Shit, it's boobsmcgee900!" #4. #3.

The NASA Space Pen In this week's Friday funny, journalist and author Eugene Byrne looks at an amusing urban legend much beloved of engineers, and frequently used in management seminars because of its powerful moral about overcomplicated solutions. The story In the 1960s, the story goes, NASA realised that astronauts would need a special pen for recording data, instrument readings etc. when in space. This pen would have to be capable of writing upside-down, in zero gravity, and in extremely high and low temperatures. NASA enlisted some of the finest minds in the country and set them to work. The truth Initially, American astronauts used pencils, too, but they weren't popular. It was actually an American pen manufacturer, Paul C Fisher (1913-2006) who came up with the solution in 1965. True, it did cost around a million dollars to develop, but that was all Fisher's money.