The Amazon River Flows Backwards, And Now Scientists Have Figured Out Why. The Amazon once flowed in the opposite direction, from east to west. 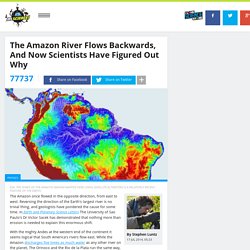 Reversing the direction of the Earth's largest river is no trivial thing, and geologists have pondered the cause for some time. In Earth and Planetary Science Letters The University of Sao Paulo's Dr Victor Sacek has demonstrated that nothing more than erosion is needed to explain this enormous shift. With the mighty Andes at the western end of the continent it seems logical that South America's rivers flow east. While the Amazon discharges five times as much water as any other river on the planet, The Orinoco and the Rio de la Plata run the same way, each dwarfing any river in North America or Europe in the process.

However, until 10 million years ago, most of what is now the Amazon basin was drained by a river that flowed west into a giant lake that lay at the feet of the northern Andes. At first the Andes rise produced a trough to the east, which became the paleolake into which the westward-flowing Amazon emptied. 150,000-Year-Old Pipes Baffle Scientists in China: Out of Place in Time? By: Tara MacIsaac, Epoch Times Oopart (out of place artifact) is a term applied to dozens of prehistoric objects found in various places around the world that seem to show a level of technological advancement incongruous with the times in which they were made. 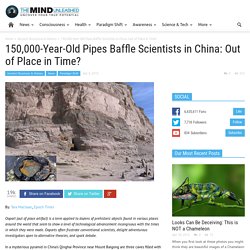 Ooparts often frustrate conventional scientists, delight adventurous investigators open to alternative theories, and spark debate. In a mysterious pyramid in China’s Qinghai Province near Mount Baigong are three caves filled with pipes leading to a nearby salt-water lake. There are also pipes under the lake bed and on the shore. The iron pipes range in size, with some smaller than a toothpick. Dating done by the Beijing Institute of Geology determined these iron pipes were smelted about 150,000 years ago, if they were indeed made by humans, according to Brian Dunning of Skeptoid.com. And if they were made by humans, history as it is commonly viewed would have to be re-evaluated. “Nature is harsh here,” he said. Other Theories. 10 Space Myths We Need to Stop Believing. Why you shouldn’t get your facts from Hollywood. 1. 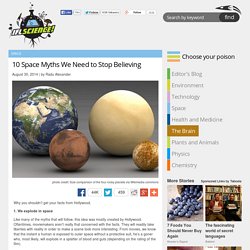 We explode in space Like many of the myths that will follow, this idea was mostly created by Hollywood. Oftentimes, moviemakers aren’t really that concerned with the facts. They will readily take liberties with reality in order to make a scene look more interesting. Exposure to space will definitely kill you, but not instantly and not in such a visceral way. 2. Venus is often referred to as our twin but this shouldn’t give you the impression that it is exactly like our planet. 3. The Sun is actually glowing, not burning. 4. Ask anyone to draw a Sun and they will immediately reach for the yellow crayon. Thing is, though, that we see it yellow thanks to our atmosphere. M.disclose. January 26, 2015 - A “lost world” never seen or touched by mankind before has been discovered by a group of scientists using a hot-water drill and underwater robotic vehicles to break through the Antarctic ice shelf. 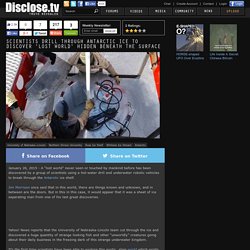 Jim Morrison once said that in this world, there are things known and unknown, and in between are the doors. But in this in this case, it would appear that it was a sheet of ice separating man from one of his last great discoveries. Yahoo! News reports that the University of Nebraska-Lincoln team cut through the ice and discovered a huge quantity of strange looking fish and other “unworldly” creatures going about their daily business in the freezing dark of this strange underwater kingdom. It’s the first time scientists have been able to explore this exotic, alien world which exists in what they term the “grounding zone,” but to you or I, is simply the place where the ice shelf meets the sea floor. 6 Things You Won't Believe Animals Do Just Like Us. Being a human is a pretty sweet gig, all things considered. 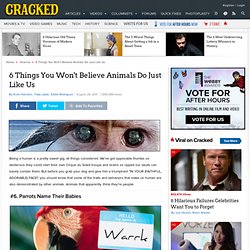 We've got opposable thumbs so dexterous they could start their own Cirque du Soleil troupe and brains so ripped our skulls can barely contain them. But before you grab your dog and give him a triumphant "IN YOUR (FAITHFUL, ADORABLE) FACE! " you should know that some of the traits and behaviors that make us human are also demonstrated by other animals. Animals that apparently think they're people. #6. What to name a baby is one of the first things that expecting parents obsess about. GettyAll babies look alike, even Theobold Pimpmeister here. And more than that, individual names also make humans special. "Never mind, Christine. Except the talking animals depicted in Disney movies aren't so far off the mark, at least when it comes to a few select species.

Wait, what? Dolphins, crows, primates and parrots have all been observed using unique calls when they want the attention of specific members of their groups. Getty"GWAAK! Getty"Hi! Questions no one knows the answers to. Biggest Misconceptions About The Universe Explained.