These psychedelic animal specimens are unlike anything you've ever seen 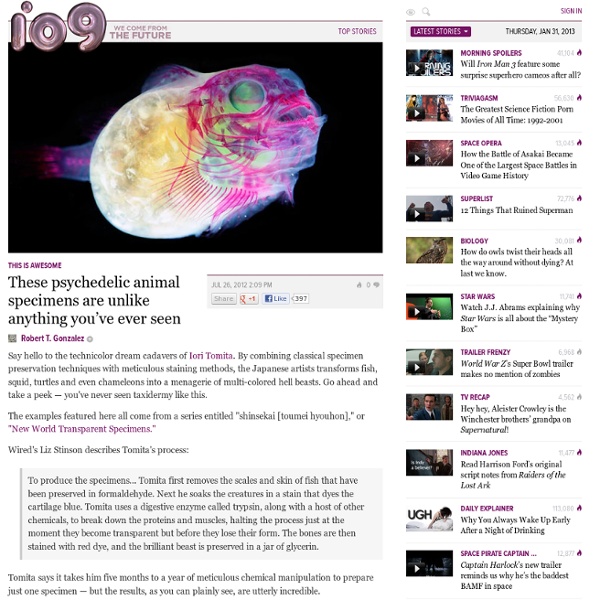 Qwerty, Drawing used a Typewriter Artist Pablo Gamboa Santos developed a series of 300 drawings, entitled Qwerty. He used an old typewriter to create layers of overlapping letters which interact directly with his detailed illustrations and function as either water or land depending on the scene. From dark at the top to lighter at the bottom, the alphabet was used as a jumble of letters rather than organized into any meaningful words. Svetlana Petrova photoshops fat ginger cat into classic paintings You know what the Mona Lisa and the Sistine Madonna are missing? A poetic, chubby ginger cat sprawled out. A Russian artist has taken hundreds of classic paintings and Photoshoppped her pet cat Zarathustra into them, making them, in our opinion, 89426576 times better. You can even buy the incredible works of art from Svetlana Petrova, on her website from around £25 and pay day is coming up… We’ve selected a handful of her best pieces of art work to make your Monday just a teeny, tiny bit better. See more amazing cat masterpieces at FatCatArt

Beyond Drawing: Creative Colored Pencil Art & Sculpture From a very first look at these wonderfully detailed colored pencil sculptures by Jennifer Maestre, it should come as no surprise that her artwork was initially inspired by spiny sea urchins – beautiful be dangerous to the touch. For each sculpture, Jennifer hacks apart hundreds of colored pencils, cores them perpendicular to their length and turns them into beads, essentially, which she then meticulously stitches back together and slowly shapes into solid sculptures. Though her beginnings were with creatures of the water, Jennifer quickly expanded her subject matter to cover other organic objects – from plants and flowers to house pets and more abstract animals. While some of her work has a planned form from the very beginning, other pieces morph and shift as they take shape into something completely unplanned but nonetheless compelling.

A4 Papercuts Ogni scultura cartacea realizzata dall’artista Peter Callesen ha un unico punto di partenza: un candido e standardizzato foglio formato A4. Quello che accade dopo il “trattamento Callesen” lo potete vedere con i vostri occhi. Uccelli in procinto di spiccare il volo, scheletri che prendono vita… “The negative and absent 2 dimensional space left by the cut, points out the contrast to the 3 dimensional reality it creates, even though the figures still stick to their origin without the possibility of escaping“. Chapeau. [Via] Comments comments This 16th Century Book Can Be Read Six Different Ways Sure, the Amazon Kindle might have dynamic font adjustments, and it can hold thousands of books, but can it do this? Printed in the late 16th century this small book from the National Library of Sweden is an example of sixfold dos-à-dos binding, where six books are conjoined into a single publication but can be read individually with the help of six perfectly placed clasps. This particular book was printed in Germany and like almost all books at the time is a religious devotional text. Update: And if you really like amazing old book discoveries, you should be following Erik Kwakkel, the Medieval book historian at Leiden University in the Netherlands, who originally unearthed this story.

"Animatus" by Hyungkoo Lee Ephemeral Portraits Cut from Layers of Wire Mesh by Seung Mo Park Using a process that could be the new definition of meticulous, Korean sculptor Seung Mo Park creates giant ephemeral portraits by cutting layer after layer of wire mesh. Each work begins with a photograph which is superimposed over layers of wire with a projector, then using a subtractive technique Park slowly snips away areas of mesh. Each piece is several inches thick as each plane that forms the final image is spaced a few finger widths apart, giving the portraits a certain depth and dimensionality that’s hard to convey in a photograph, but this video on YouTube shows it pretty well. Park just exhibited this month at Blank Space Gallery in New York as part of his latest series Maya (meaning “illusion” in Sanskrit). You can see much more at West Collects. (art news, west collects, lavinia tribiani)

Paint Dropped in Water The images that you see before you appear to be different things to different people. Because of my obsession with the National Geographic and the Discovery Channel, to me, the images below appear to be some newly discovered creatures from the deep sea or images released by NASA of newly discovered galaxies. These stunning images are taken by British photographer, Mark Mawson, who has been taking pictures for over 22 years and specializing in shooting under water scenes. For his Aqueous Series, he takes several drops of colored paint and drops it into a tank of water. As gravity goes to work, so does Mark Mawson. He uses a strobe light to light up the scene and captures the scene as the paint disperses. Have a look at the images below and make sure you check out the work of Mark Mawson. Posted on December 13, 2011 Got something to say? Comment Rules: Keep it civil, and please do not use your site URL in either your name or the comment text.

"Twelve Animals" by Kentaro Nagai 12 Feb 2009 In a series of illustrations entitled "Twelve Animals," graphic artist Kentaro Nagai rearranges the world map to create the beasts of the Chinese zodiac. Rat Ox Tiger Rabbit Dragon Snake // Horse Sheep Monkey Rooster Dog Boar The images shown here are high-contrast black-and-white photos of Nagai's work, which is on display at the Japan Media Arts Festival at the National Art Center, Tokyo until February 15. - Added: Also check out the animated Flash version of "Twelve Animals" at Graflex Directions. Best of Public Art As summer starts to heat up, people are heading outdoors to the nearest beaches and parks to soak up some sun. Architects, artists and designers are drumming up attention in these urban and natural environments by activating underutilised public spaces in clever ways. Using art in the public realm, these pieces become complete with the interaction of people. Net Blow-Up by Numen/For Use Blown up until reaching its fully inflated state, the self-supporting bubble reveals layers of internal nets. Visitors can climb throughout the interior and nighttime illumination places their movements on display to passersby outside. Color Field by Ivan Toth Depeña Making a mundane space more exciting, Ivan Toth Depeña's installation places steel posts topped with coloured glass panels along a series of paths and stairways at a train station outside of Denver, Colorado. It Started With a Dime by Studio Wessels Boer Psychylustro by Katherina Grosse Literature vs. String Prototype by Numen/For Use