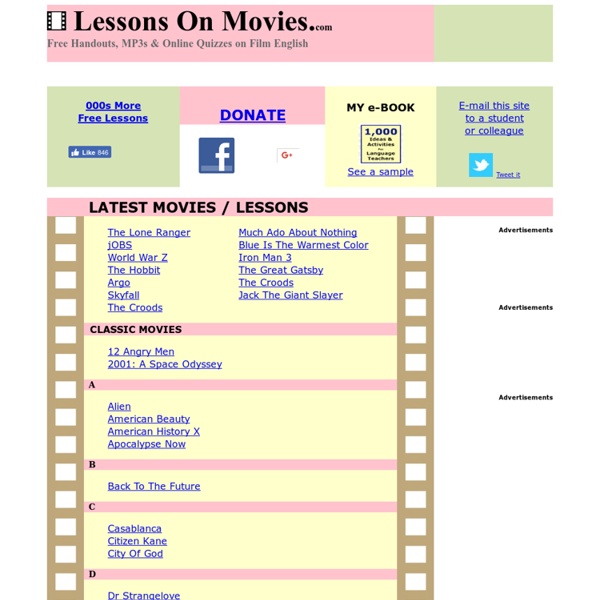 ESL Teaching Videos Google + Students really enjoy watching movies and TV for a variety of reasons. For one, they get exposure to natural language in a non-threatening setting. Secondly, movies and video provide common ground to students of any international background. Below you'll find both general teaching resources as well as fully-developed lessons on various films and videos. Rotten Tomatoes Luckily this movies theme and visual direction grabbed my attention...well mainly the visuals. The story begins with flashbacks within flashbacks as a young girl starts to read from a memoir written by the 'author' (Tom Wilkinson). The memoir recounts a tale about a trip he made to the Grand Budapest Hotel back in 1968, the younger version of the author played by Jude Law. The young author meets up with the aging hotel owner played by F.

Using Silent Video in the EFL Classroom This video is the BOMB! It is captivating, absorbing, a story par excellence but also SILENT! Yes, silent films are great for getting students to produce language — and after all is said and done, that most often is the hardest thing to do, getting the students speaking and learning language by just communicating. That is our job, to get the students so absorbed in the communicative act that they forget they are learning. When we forget and are not consciously fixated on the language – we learn so much more! And silent , great silent movies do that so well.

Oscar Week Special: Seven Teaching Resources on Film Literacy The Academy Awards are just around the corner, and there are a number of nominated films that can be great teaching tools for educators this year. With the abundance of media messages in our society, it's important to ensure students are media literate. The Oscars provide a great opportunity to use the year's best films to teach students about media and film literacy. Not to mention, films can also be an engaging teaching tool for piquing interest in a variety of subjects and issues. In this compilation, you'll find classroom resources from around the web that cover many of this year's nominated films, as well as general resources for using film as a teaching tool.

Connect With English Introduction Introduction: An overview of the course and an introduction to the main characters in the drama. Rebecca's Dream Rebecca's Dream: The story begins as we meet Rebecca Casey, a 28-year-old Boston working woman, who dreams of becoming a singer. We also meet her boyfriend Matt who doesn't think much of her dream, and her 17-year-old brother, Kevin, who doesn't think much about the future at all. Rebecca considers applying for music school and pursuing her career full-time, rather than holding down a factory job and doing her music on the side. We also meet real-life immigrants and students who discuss the similarities between Rebecca's experiences and their own.