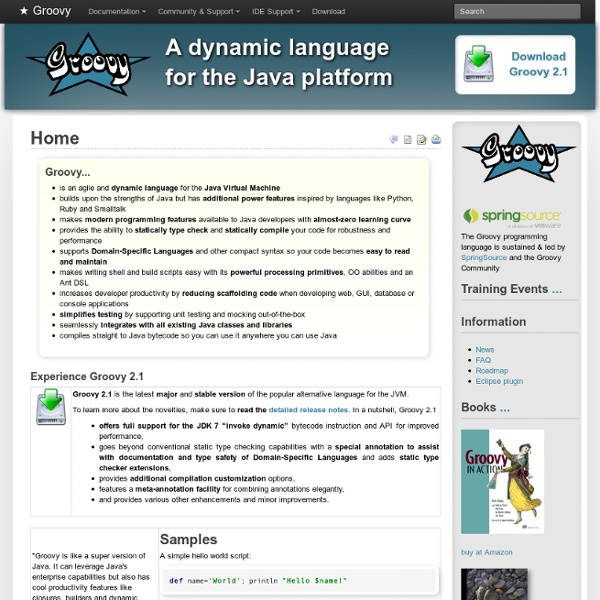 Hi all, The Groovy team is very pleased to announce the first beta of the Groovy 2.3 release! Groovy 2.3.0-beta-1 is actually already a feature-complete beta, so the release cycle towards the final version will be very short. Furthermore, Grails 2.4 is looking forward to integrating it rapidly as well for its upcoming major release too! So you can expect a general availability version of Groovy in the coming weeks, as we’ll move directly in “release candidate” mode after this beta. But your feedback, as usual, will be very important for trying out this beta in your respective projects, to tell us about any problem you might encounter.

www.tuaw.com/about Established December 5, 2004, The Unofficial Apple Weblog (TUAW) is a resource for all things Apple and beyond. TUAW publishes news stories, credible rumors and how-to's covering a variety of topics daily. As a trusted tech blog, TUAW provides opinion and analysis on the news in addition to the facts. TUAW is a trusted source for news, information and analysis about Apple and its products. Our readership is made up of new users, intermediate and business users and advanced users. In addition, we cover topics relevant to niches like developers, designers and others. SourceMonitor V3.2 The freeware program SourceMonitor lets you see inside your software source code to find out how much code you have and to identify the relative complexity of your modules. For example, you can use SourceMonitor to identify the code that is most likely to contain defects and thus warrants formal review. SourceMonitor, written in C++, runs through your code at high speed, typically at least 10,000 lines of code per second. SourceMonitor provides the following:

Whatever Happened to APL? Late, great Ken Iverson Whatever Happened to APL?by John C. Dvorak (originally appeared circa 1998) The Jython Project Guacamole - HTML5 Clientless Remote Desktop Scala or Java? Exploring myths and facts The popularization of the Scala programming language, noticeable by the abundance of opinions and criticism on blogs and social networks (like this one by Nikita Ivanov from GridGain and the popular Yammer case), greatly increased the amount of information about the language. However, the quality of such information often leaves much to be desired. Whether those opinions are favorable or contrary to the Scala, they often contain outdated, superficial or biased statements. The goal of this article is to help those learning or evaluating Scala to come into their own conclusions. It presents the most common questions about language and its environment and, for each one, added clarifications, examples and links, favoring the formation of a better opinion or a more accurate assessment.

Welcome to Apache Pig! The Julia Language Apache Hive TM The Scala Programming Language Coding Horror Rosetta Code Wireframing Tool for Professionals st - A place for geeks to share what they've done, who they did it with and connect with great companies

There is support for GPars(Groovy Parallels) and actors tho have not read much into this. Been thinking of putting a POC together for current employer to replace JBPM by superunknown Apr 10

Very close to the java syntax but has all the power of a scripting lang. Some big pojects using it are: grails, gvm, vertx(I think) griffon(for swing dev). If I need to do scripting related work I use this as its very easy given java skills and libs. Prior to groovy 2.1.X there was performance pentality tho they have add @Compile IIRC. I know netflicks have some webapp of theirs based on grails running. by superunknown Apr 10