Amazon. Tochi.96. Tochi.96. Juice Labs - Chart Chooser. Perception in Visualization. Note: An ex­tended ver­sion of this web page has been ac­cepted for pub­li­ca­tion in IEEE Trans­ac­tions on Vi­su­al­iza­tion and Com­puter Graph­ics. 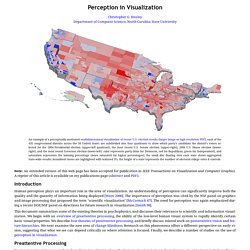 A reprint of this ar­ti­cle is avail­able on my pub­li­ca­tions page (ab­stract and PDF). In­tro­duc­tion Human per­cep­tion plays an im­por­tant role in the area of vi­su­al­iza­tion. An un­der­stand­ing of per­cep­tion can sig­nif­i­cantly im­prove both the qual­ity and the quan­tity of in­for­ma­tion being dis­played [Ware 2000]. The im­por­tance of per­cep­tion was cited by the NSF panel on graph­ics and image pro­cess­ing that pro­posed the term "sci­en­tific vi­su­al­iza­tion" [Mc­Cormick 87]. This doc­u­ment sum­ma­rizes some of the ex­ist­ing the­o­ries in psy­chophysics, and dis­cusses their rel­e­vance to sci­en­tific and in­for­ma­tion vi­su­al­iza­tion. Preat­ten­tive Pro­cess­ing For many years vi­sion re­searchers have been in­ves­ti­gat­ing how the human vi­sual sys­tem analy­ses im­ages. Fea­ture In­te­gra­tion The­ory Color. The right graph. Graph Selection Matrix. How to Visualize and Compare Distributions. There are a lot of ways to show distributions, but for the purposes of this tutorial, I’m only going to cover the more traditional plot types like histograms and box plots. 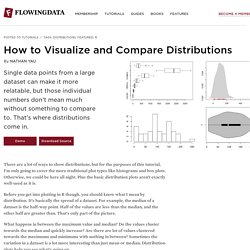 Otherwise, we could be here all night. Plus the basic distribution plots aren’t exactly well-used as it is. Before you get into plotting in R though, you should know what I mean by distribution. It’s basically the spread of a dataset. For example, the median of a dataset is the half-way point. What happens in between the maximum value and median? Want more? If you don’t have R installed yet, do that now. Box-and-Whisker Plot This old standby was created by statistician John Tukey in the age of graphing with pencil and paper. The method might be old, but they still work for showing basic distribution. To get started, load the data in R. Remove the District of Columbia from the loaded data.

Oh, and you don’t need the national averages for this tutorial either. Multiple box plot for comparision. Histogram Look, ma! Rug. In praise of connected scatter plots. I guess that it's safe to assume that whoever visits this website is already familiar with Hans Rosling's presentations. 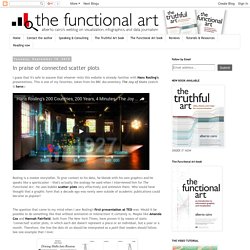 This is one of my favorites, taken from his BBC documentary The Joy of Stats (watch it here): Rosling is a master storyteller. To give context to his data, he blends with his own graphics and he speaks like a sportscaster —that's actually the analogy he used when I interviewed him for The Functional Art. He uses bubble scatter plots very effectively and animates them.

Who would have thought that a graphic form that a decade ago was rarely seen outside of academic publications could become so popular? The question that came to my mind when I saw Rosling's first presentation at TED was: Would it be possible to do something like that without animation or interaction? Driving Shifts Into Reverse (Hannah Fairfield for The New York Times). And this one was published today. Driving Safety, in Fits and Starts (Hannah Fairfield for The New York Times). Intro to cycle plots. Edward Tufte forum: Sparkline theory and practice Edward Tufte. Sparkline theory and practice Edward Tufte A sparkline is a small intense, simple, word-sized graphic with typographic resolution. 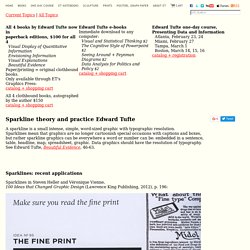