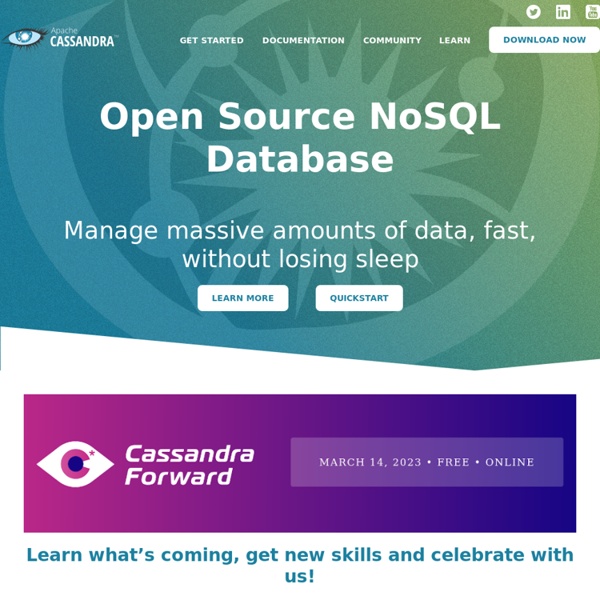 Cassandra Welcome to Apache Cassandra The Apache Cassandra database is the right choice when you need scalability and high availability without compromising performance. Linear scalability and proven fault-tolerance on commodity hardware or cloud infrastructure make it the perfect platform for mission-critical data. Cassandra's support for replicating across multiple datacenters is best-in-class, providing lower latency for your users and the peace of mind of knowing that you can survive regional outages. Cassandra's data model offers the convenience of column indexes with the performance of log-structured updates, strong support for denormalization and materialized views, and powerful built-in caching.

22 free tools for data visualization and analysis You may not think you've got much in common with an investigative journalist or an academic medical researcher. But if you're trying to extract useful information from an ever-increasing inflow of data, you'll likely find visualization useful -- whether it's to show patterns or trends with graphics instead of mountains of text, or to try to explain complex issues to a nontechnical audience. There are many tools around to help turn data into graphics, but they can carry hefty price tags. The cost can make sense for professionals whose primary job is to find meaning in mountains of information, but you might not be able to justify such an expense if you or your users only need a graphics application from time to time, or if your budget for new tools is somewhat limited.

Programmer’s Toolbox Part 3: Consistent Hashing « tomkleinpeter.com Next up in the toolbox series is an idea so good it deserves an entire article all to itself: consistent hashing. Let’s say you’re a hot startup and your database is starting to slow down. You decide to cache some results so that you can render web pages more quickly. GettingStarted Cassandra documentation from DataStax DataStax's latest Cassandra documentation covers topics from installation to troubleshooting, including a Quick Start Guide. Documentation for older releases is also available. Introduction This document aims to provide a few easy to follow steps to take the first-time user from installation, to running single node Cassandra, and overview to configure multinode cluster.

Object Computing, Inc. — Java News Brief — June 2009 by Andrew Prunicki, Senior Software Engineer Object Computing, Inc. (OCI) Introduction Thrift is a framework for creating interoperable and scalable services. Developing LDTV: Cassandra data model for transactions In the past, I've built quite an extensive transaction system that has a lot of features, among those features are prepaid cards, subscriptions, simple movie rentals and package rentals. Credit card details, fancy service subscriptions(like AllCharge) and preapproves(PayPal) It has all or nothing transaction policy, which means if the last step fails, rollback everything you did so far, which means that if you buy something with a prepaid card, but the card doesn't hold enough credit, the card will be charged all it can and the rest will be charged though your primary payment method. Which is good, but what happens if PayPal decides it can't process your transaction, whatever you did so far has to be rollback-ed, so you won't be charged on the preapprove as well. This is a really cool feature of ACID compliant databases(I use InnoDB on mysql). But one of the weak spot of such databases, is that they don't have a flexible column model.

Big Data Is As Misunderstood As Twitter Was Back In 2008 Boonsri Dickinson, Business Insider In 2008, when Howard Lindzon started StockTwits, no one knew what Twitter was. Obviously, that has changed. Now that Twitter is more of a mainstream communication channel, Lindzon has figured out the secret to getting past all the noise on Twitter. By using human curation, StockTwits can serve up relevant social media content to major players like MSN Money. Google’s Bigtable Distributed Storage System, Pt. I Google rolls out new applications to millions of users with surprising frequency, which is pretty amazing all by itself. Yet when you look at the variety of the applications, ranging from data-sucking behemoths like webcrawling to intimate apps like Personalized Search and Writely it is even more startling. How does the Google architecture manage the conflicting requirements of such a wide range of workloads? Bigtable, a Google-developed distributed storage system for structured data, is a big piece of the answer. Isn’t The Google File System The Answer?Another part, yes.