Blog - Using Datomic as a Graph Database. Datomic is a database that changes the way that you think about databases. 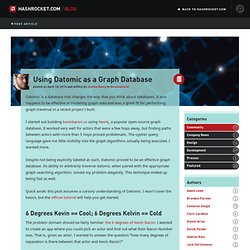 It also happens to be effective at modeling graph data and was a great fit for performing graph traversal in a recent project I built. I started out building kevinbacon.us using Neo4j, a popular open-source graph database. It worked very well for actors that were a few hops away, but finding paths between actors with more than 5 hops proved problematic. The cypher query language gave me little visibility into the graph algorithms actually being executed. I wanted more. Despite not being explicitly labeled as such, Datomic proved to be an effective graph database. Quick aside: this post assumes a cursory understanding of Datomic. 6 Degrees Kevin == Cool; 6 Degrees Kelvin == Cold The problem domain should be fairly familiar: the 6 degrees of Kevin Bacon. Using information freely available from IMDb, I developed the following schema: In a nutshell, movies have titles and years. 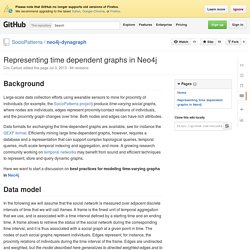 Both nodes and edges can have rich attributes. Data formats for exchanging the time-dependent graphs are available, see for instance the GEXF format. Efficiently mining large time-dependent graphs, however, requires a database and a representation that can support complex topological queries, temporal queries, multi-scale temporal indexing and aggregation, and more. A growing research community working on temporal networks may benefit from sound and efficient techniques to represent, store and query dynamic graphs. Here we want to start a discussion on best practices for modeling time-varying graphs in Neo4j. 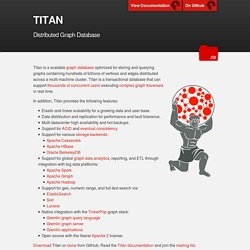 Titan is a transactional database that can support thousands of concurrent users executing complex graph traversals in real time. In addition, Titan provides the following features: Download Titan or clone from GitHub. Read the Titan documentation and join the mailing list. <dependency><groupId>com.thinkaurelius.titan</groupId><artifactId>titan-core</artifactId><version>1.0.0</version></dependency><! // who is hercules' grandfather? Continue with the Getting Started with Titan guide for a step-by-step introduction. 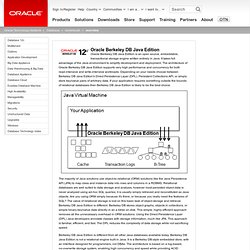