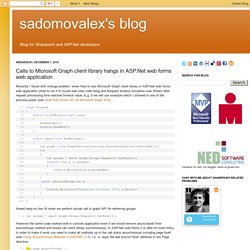 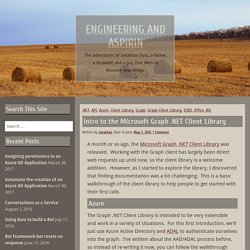 Working with the Graph client has largely been direct web requests up until now, so the client library is a welcome addition. However, as I started to explore the library, I discovered that finding documentation was a bit challenging. Microsoft Graph Client Library 1.2.1. This package includes the client libraries for connecting your app to the Microsoft Graph. 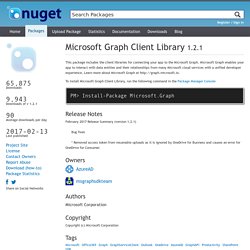 Microsoft Graph enables your app to interact with data entities and their relationships from many Microsoft cloud services with a unified developer experience. Learn more about Microsoft Graph at To install Microsoft Graph Client Library, run the following command in the Package Manager Console. Accessing the Graph Api from a C# Winform Application. Integrate with Office 365 APIs in your Visual Studio 2015 projects. Working with Office 365 REST API with Fiddler - Evangelism - Infragistics.com Blog. In one of my previous blog posts, I explained how to Setup an Application in Azure AD for Office 365 API Access – but in this blog post, we’ll take the next step and see how to work with the raw data and interact with the Office 365 REST API using a tool called “Fiddler”. 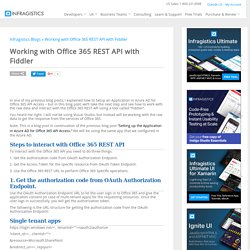 You heard me right: I will not be using Visual Studio, but instead will be working with the raw data to get the response from the services of Office 365. Note: This is a blog post in continuation of the previous blog post “Setting up the Application in Azure AD for Office 365 API Access.”We will be using the same app that we configured in the Azure AD. To interact with the Office 365 API you need to do three things: 1. Get the authorization code from OAuth Authorization Endpoint. 2. 3. Use the OAuth Authorization Endpoint URL to let the user sign in to Office 365 and give the application consent (in case of multi-tenant apps) for the requesting resources. Tenantid="">/oauth2/authorize ? TrainingContent/O3651/O3651-5 Getting started in Office 365 with the Microsoft Graph API at master · OfficeDev/TrainingContent. Connectors Developer Dashboard Beta Guide - Outlook Dev Center. 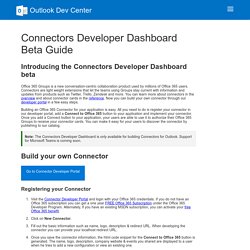 Connectors are light weight extensions that let the teams using Groups stay current with information and updates from products such as Twitter, Trello, Zendesk and more. You can learn more about connectors in the overview and about connector cards in the reference. Now you can build your own connector through our developer portal in a few easy steps. Building an Office 365 Connector for your application is easy. Note: The Connectors Developer Dashboard is only available for building Connectors for Outlook. 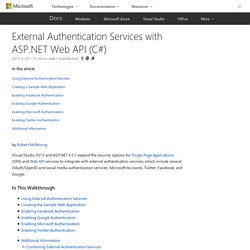 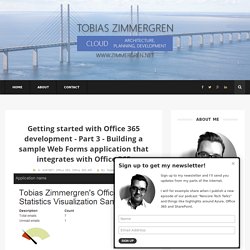 Over a discussion a few days back someone asked if there weren’t any API’s for working with Web Forms instead of only MVC. The preview tools were previously only targeting MVC, Win Phone 8 and Windows 8 apps but have now been updated to include support for more project types, including Web Forms. See my previous article for a quick intro to using the API’s with MVC. Microsoft Graph: Outlook Extensions. What is the Microsoft Graph? 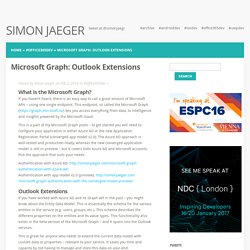 If you haven’t heard, there is an easy way to call a great amount of Microsoft APIs – using one single endpoint. This endpoint, so called the Microsoft Graph ( lets you access everything from data, to intelligence and insights powered by the Microsoft cloud. This is a part of my Microsoft Graph posts – to get started you will need to configure your application in either Azure AD or the new Application Registration Portal (converged app model v2.0).

The Azure AD approach is well-tested and production-ready, whereas the new converged application model is still in preview – but it covers both Azure AD and Microsoft accounts. Pick the approach that suits your needs. Outlook OAuth Sandbox - Outlook Dev Center. Sending mails with embedded images via the Microsoft Graph - @eliostruyf. Creating and renewing your Microsoft Graph webhook subscriptions - @eliostruyf. Webhooks are an easy way to do something when an event occurs. 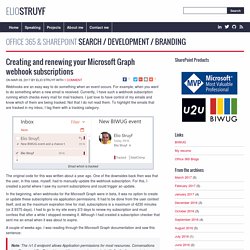 For example, when you want to do something when a new email is received. Currently, I have such a webhook subscription running which checks every mail for mail trackers. I just love to have control of my emails and know which of them are being tracked. Not that I do not read them. To highlight the emails that are tracked in my inbox, I tag them with a tracking category. Email which is tracked The original code for this was written about a year ago. In the beginning, when webhooks for the Microsoft Graph were in beta, it was no option to create or update these subscriptions via application permissions.

A couple of weeks ago, I was reading through the Microsoft Graph documentation and saw this sentence: Note: The /v1.0 endpoint allows Application permissions for most resources. Access Microsoft's Outlook API Using the OAuth2 Implicit Flow. I was recently tasked with creating a Webpart for displaying a user’s Outlook calendar events using the new Microsoft Outlook API endpoints, which requires passing an authorization token in the header of any request in order to gain access to a user’s Outlook data. 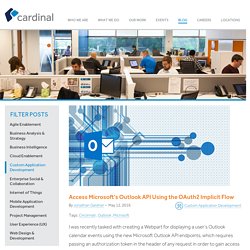 Before people flee in terror at the prospect of dealing with Sharepoint, let me assure you this guide has very little to do with Sharepoint (I know very little about Sharepoint and how it all works, myself). This post is a step-by-step of how I accomplished connecting to the Outlook API. OAuth2 has several different “flows” that handle different scenarios. There’s the Authorization Code flow, Implicit Grant flow, Resource Owner Password flow, and the Client Credentials flow.

The latter two flows are only used in very specific situations so I won’t go into those here. The first step for getting the data we need is constructing a call to the Microsoft OAuth2 authorization endpoint. Here’s an example of the request url: The Magic of using Asynchronous Methods in ASP.NET 4.5 plus an important gotcha - Scott Hanselman. Calling O365 APIs from your Web API on behalf of a user.

This post will show how to create a custom Web API that calls the Office 365 APIs on behalf of a user. Background How about that title?!? That’s pretty geeky. How to use Microsoft Graph and Office 365 API in a Service or in a Windows App/UWP without a graphical interface – Laurent Ellerbach. Office 365 Graph is just a great way to add Office 365 integration into your application. You’ll find many great information in the Office Dev Center to explain more all what is available.

I was interested in adding Office 365 integration in a normal Windows .NET Service on my serveur as well as on a RaspberryPi running Windows IoT Core in a Universal Windows Platform (UWP) application. I want to have a user which can automatically receive emails, do action based on those emails, send calendar items. In both cases, I don’t have any user interface.