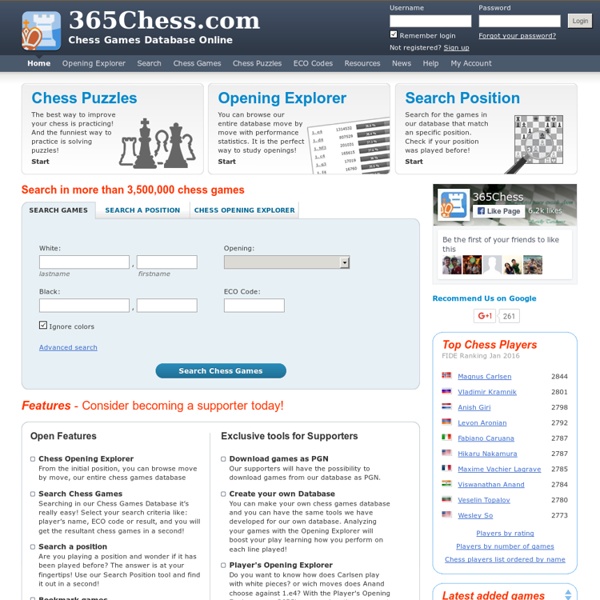 ChessCube Fédération Française des Échecs Chess Chess is a two-player strategy board game played on a chessboard, a checkered gameboard with 64 squares arranged in an eight-by-eight grid. It is one of the world's most popular games, played by millions of people worldwide in homes, parks, clubs, online, by correspondence, and in tournaments. Rules Initial position, first row: rook, knight, bishop, queen, king, bishop, knight, and rook; second row: pawns Setup at the start of a game The official rules of chess are maintained by the World Chess Federation. Setup Movement White always moves first. Each chess piece has its own style of moving. Examples of castling Castling Once in every game, each king is allowed to make a special move, known as castling. Neither of the pieces involved in castling may have been previously moved during the game.There must be no pieces between the king and the rook.The king may not be in check, nor may the king pass through squares that are under attack by enemy pieces, nor move to a square where it is in check.

ChessOK.com: Chess shop from the developers of Rybka 4 Aquarium Daily Chess Problem Use the mouse to move the pieces for both sides. The Move List will record your moves, up to a maximum of 12 moves. If you attempt an illegal move, the piece will return to its original position. The Hint button will show you the solution, one move at a time. (If you move pieces manually, the Hint button will become disabled.) The Solution button will show you the problem's complete solution -- remember that many chess problems will have multiple correct solutions. By default, a pawn will be promoted to a Queen. The date box at the bottom can be used to select a problem from the past seven days. If you're new to chess, visit some of the Chess web sites listed on the Links page for information about the rules of chess, move notation, etc.

Chess News | The Week in Chess Chess problem A chess problem, also called a chess composition, is a puzzle set by somebody using chess pieces on a chess board, that presents the solver with a particular task to be achieved. For instance, a position might be given with the instruction that White is to move first, and checkmate Black in two moves against any possible defense. A person who creates such problems is known as a composer. The term "chess problem" is not sharply defined: there is no clear demarcation between chess compositions on the one hand and puzzles or tactical exercises on the other. The position is composed – that is, it has not been taken from an actual game, but has been invented for the specific purpose of providing a problem. Problems can be contrasted with tactical puzzles often found in chess columns or magazines in which the task is to find the best move or sequence of moves (usually leading to mate or gain of material) from a given position. Types of problem[edit] Beauty in chess problems[edit]

The Bishops Bounty Chess Problems News: Old chess problem books have recently become much easier to access, thanks to Google Books and similar services, as well as Kessinger and other reprint publishers. Some time ago I discovered that the Mackenzie title I was working on was available on Google books, and as it seemed doubtful if a new edition would be of any additional value, my work on it grew more and more fitful, and gradually ceased: today I have dropped it entirely. This means that I will probably not add any new titles to the list below, unless I am convinced that such addition would be useful, even if there are other sources for it. American Chess-Nuts will remain a bit longer -- I might still finish it. I would like to pass on a word of warning to those who decide to purchase reprint edition: if you do, be sure to verify pagination carefully when you receive the book.