Negotiation Skills For Project Managers. The Networking Email Template That Gets Answers. I’ve had the best time reading my email lately. 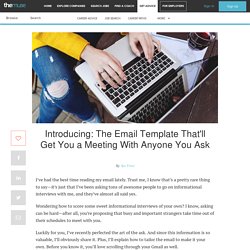 Trust me, I know that’s a pretty rare thing to say—it’s just that I’ve been asking tons of awesome people to go on informational interviews with me, and they’ve almost all said yes. Wondering how to score some sweet informational interviews of your own? I know, asking can be hard—after all, you’re proposing that busy and important strangers take time out of their schedules to meet with you. 9 Cold Email Formulas That Just Plain Work. Pop quiz. 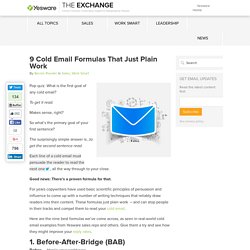 What is the first goal of any cold email? To get it read. Makes sense, right? So what’s the primary goal of your first sentence? How to Know If You Talk Too Much. You may have heard the saying, “When you’re in love, smoke gets in your eyes.” 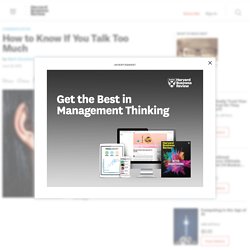 Well when you’re talking, smoke gets in your eyes and ears. Once you’re on a roll, it’s very easy to not notice that you’ve worn out your welcome. You may not even realize that the other person is politely trying to get a word in, or subtly signaling that they need to be elsewhere (possibly, anywhere else if you have been really boring). There are three stages of speaking to other people. In the first stage, you’re on task, relevant and concise. The third stage occurs after you have lost track of what you were saying and begin to realize you might need to reel the other person back in. Unfortunately, rather than finding a way to reengage your innocent victim through having them talk and then listening to them, instead the usual impulse is to talk even more in an effort to regain their interest.

Why does this happen? Well I think my 40 seconds is up, so I’ll stop here. The Best Times To Send Email For Replies. What’s the best time to send an email? 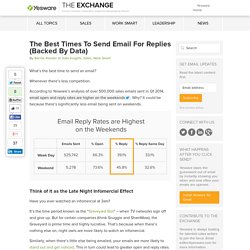 Whenever there’s less competition. Think of it as the Late Night Infomercial Effect Have you ever watched an infomercial at 3am? It’s the time period known as the “Graveyard Slot” – when TV networks sign off and give up. But for certain companies (think Snuggie and ShamWow), the Graveyard is prime time and highly lucrative. Similarly, when there’s little else being emailed, your emails are more likely to stand out and get noticed. We see this same line of thinking when we look at email reply rates over 24 hours. Emails sent in the early morning (between 6 and 7 am) and evening (around 8 pm) were the most effective at getting a response, with reply rates hovering around 45%. Last but not least: There is no “best day” to send email We ran the numbers and found that open and reply rates were pretty similar no matter what weekday an email was sent.

Takeaways. 4 Sales Follow Up Email Templates That Get Replies. The importance of follow-up emails in sales goes far beyond just “checking in.” 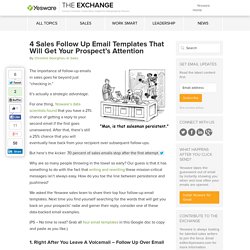 It’s actually a strategic advantage. For one thing, Yesware’s data scientists found that you have a 21% chance of getting a reply to your second email if the first goes unanswered. After that, there’s still a 25% chance that you will eventually hear back from your recipient over subsequent follow-ups. Why are so many people throwing in the towel so early? Our guess is that it has something to do with the fact that writing and rewriting these mission-critical messages isn’t always easy.

We asked the Yesware sales team to share their top four follow-up email templates. (PS – No time to read? 1. Likewise, following a voicemail with a quick email can pack a one-two punch powerful enough to break through to the busy person you’ve been trying to reach. Example: 2. Sales Rep Nico Papas has a dead simple follow-up strategy that helps him quickly capture his prospects’ attention, resulting in a 50% reply rate. 3. 4. Zen and the Art of Selling Professional Services - The Gold Mine.

“Stop selling your professional services, you are killing your sales.” 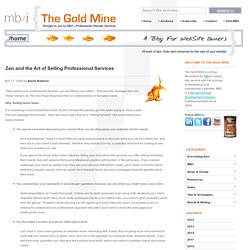 That was the message from Jim Horan (known for The One Page Business Plan) in a teleseminar of the same name. Why Selling Hurts Sales. Zen and the Art of Selling. Mindful Sales Training - Brixton.