Windshield Forcefield. Geek.com Monday, December 16, 2013 4:28 PM GMT Buy any car today, regardless of make, model, or cost, and they'll all have one thing in common: windshield wipers. 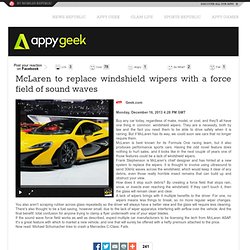 They are a necessity, both by law and the fact you need them to be able to drive safely when it is raining. But if McLaren has its way, we could soon see cars that no longer require them. McLaren is best known for its Formula One racing team, but it also produces performance sports cars. Frank Stephenson is McLaren's chief designer and has hinted at a new system to replace the wipers. How does it stop such debris? A lack of wipers brings with it multiple benefits to the driver. If the sound wave force field works as well as described, expect multiple car manufacturers to be licensing the tech from McLaren ASAP. Now read: Michael Schumacher tries to crash a Mercedes C-Class. Korea OKs 'invisible' skyscraper plan. From cloaked alien tanks and jets in the computer game “Starcraft” to a transparent flying fortress in the movie Avengers, invisible structures have always been considered a product of imaginary science, whose rightful place is within the boundaries of fiction. 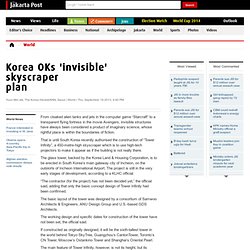 That is until South Korea recently authorised the construction of “Tower Infinity”, a 450-metre-high skyscraper which is to use high-tech projectors to make it appear as if the building is not really there. The glass tower, backed by the Korea Land & Housing Corporation, is to be erected in South Korea’s main gateway city of Incheon, on the outskirts of Incheon International Airport. The project is still in the very early stages of development, according to a KLHC official. “The contractor (for the project) has not been decided yet,” the official said, adding that only the basic concept design of Tower Infinity had been confirmed.

The images will be altered to create panoramic visuals to elude the eyes of beholders. Animal invisibility cloak makes cat and fish vanish. Scientists have shown off their latest "invisibility cloak" by making a pet goldfish and a small cat vanish from plain sight. The device is crude and unlikely to pass muster with the pupils of Hogwarts, but researchers said it marked a significant step forward in the science of the unseen. In video footage of the device in action, a goldfish suddenly appears as it swims out of a cloak submerged in its tank. In another clip, the lower half of a cat disappears as it steps inside a cloak placed on a table. Scientists led by Baile Zhang at Nanyang Technological University in Singapore created the cloaks from thin panels of glass that make objects invisible by bending light around them. Though rudimentary - the devices only hide objects from certain angles, and in both cases the cloaks themselves were partially visible – they are better than earlier versions that worked only with polarised light, or with microwaves instead of the visible wavelengths that humans see in.

A New Kind of Invisibility Cloak Demonstrates Better Cloaking Efficiency. Top: Color online) Snap-shots of Hz distributions for fwork=8 GHz at TM wave incidence on: (a) bare metallic cylinder with the radius 0.75 λwork; (b) the same target cloaked by the shell with material parameters prescribed by Eq. (7); (c) the same target cloaked by the multi-layer dielectric shell; (d) zoomed-in view of (c).Bottom: (Color online) The TSCW spectra obtained by integrating the simulated far-fields for the cloaked and bare targets of two different sizes. 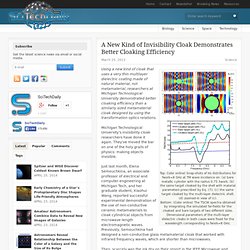 Illusion cloaks that make one object look like another are a fascinating type of invisibility device. 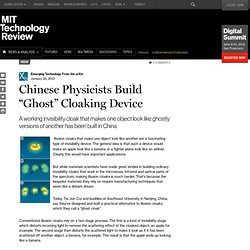 The general idea is that such a device would make an apple look like a banana or a fighter plane look like an airliner. Clearly this would have important applications. But while materials scientists have made great strides in building ordinary invisibility cloaks that work in the microwave, infrared and optical parts of the spectrum, making illusion cloaks is much harder. That’s because the bespoke materials they rely on require manufacturing techniques that seem like a distant dream. Today, Tie Jun Cui and buddies at Southeast University in Nanjing, China, say they’ve designed and built a practical alternative to illusion cloaks, which they call a “ghost cloak”. Conventional illusion cloaks rely on a two stage process. But materials that can perform this two-stage process are too demanding to make with current techniques. That’s an interesting advance. Organ Transparency Chemical.