A chemical that can turn your organs transparent 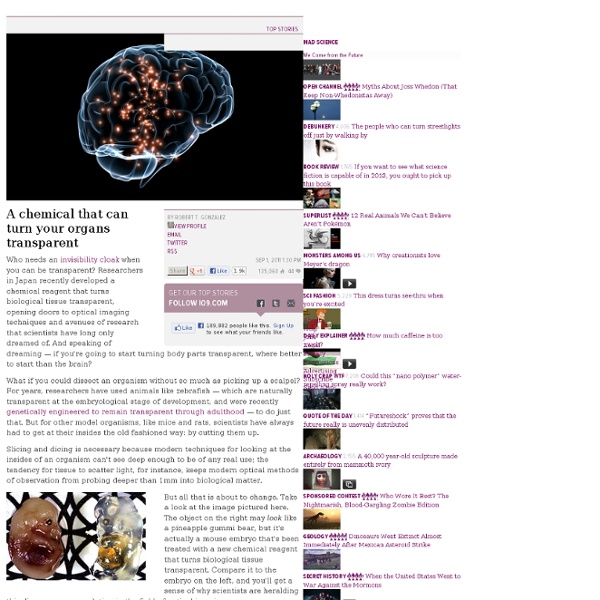 Meat without slaughter: '6 months' to bio-sausages - science-in-society - 31 August 2011 Editorial: "Credible or inedible?" Who needs whole animals when you can grow burgers and sausages from their cells alone, in the lab - and do your bit for the environment too FIRST we hunted animals for their meat. Then we developed ways to raise them on farms. This week, researchers met in Gothenburg, Sweden, to plot out a path towards meat without slaughter.

Scientist creates lifelike cells out of metal Scientists trying to create artificial life generally work under the assumption that life must be carbon-based, but what if a living thing could be made from another element? One British researcher may have proven that theory, potentially rewriting the book of life. Lee Cronin of the University of Glasgow has created lifelike cells from metal — a feat few believed feasible. Even more remarkable, Cronin has hinted that the metal-based cells may be replicating themselves and evolving. "I am 100 percent positive that we can get evolution to work outside organic biology," he said. The high-functioning "cells" that Cronin has built are constructed from large polyoxometalates derived from a range of metal atoms, like tungsten. The metallic bubbles are certainly cell-like, but are they actually alive? Cronin's team has also created bubbles inside of bubbles, which opens the door to the possibility of developing specialized "organelles." The early results have been encouraging.

Mad science News, Videos, Reviews and Gossip - io9 About 60 years late to the party on dreaming that one up, friend. :-) in short...solar power is inefficient, and electrolysis of water to create hydrogen is energy intensive, which means it wastes a lot of energy to create that hydrogen to be used as an energy source. IIRC electrolysis is at best 50% energy efficient, with solar being 20% efficient at converting sunlight to electricity, which has a decent, but low yield in the first place. A meter square of solar cells intercepts ~1200 watts of power. This returns only 20%, so 60w, 50% of which is lost for electrolysis, so we're down to 30W of power stored. Fuel cells convert something like 60% of stored energy into actual mechanical, lets get this thing moving energy...so we're down to 19.2W of energy used via hydrogen fuel cells filled using every square meter of solar cells we use. We could do it, but as you can see we lose a lot of energy in the process.

Hot springs microbe yields record-breaking, heat-tolerant enzyme Bioprospectors from the University of California, Berkeley, and the University of Maryland School of Medicine have found a microbe in a Nevada hot spring that happily eats plant material – cellulose – at temperatures near the boiling point of water. In fact, the microbe’s cellulose-digesting enzyme, called a cellulase, is most active at a record 109 degrees Celsius (228 degrees Fahrenheit), significantly above the 100℃ (212℉) boiling point of water. A 94°C geothermal pool, with a level-maintaining siphon, near Gerlach, Nevada. Sediment from the floor of this pool was enriched on pulverized miscanthus at 90°C and subsequently transferred to filter paper in order to isolate microbes able to subsist on cellulose alone. This so-called hyperthermophilic microbe, discovered in a 95℃ (203℉) geothermal pool, is only the second member of the ancient group Archaea known to grow by digesting cellulose above 80℃. Clark and coworkers at UC Berkeley are teaming with colleagues, led by Frank T.

Stem Cell Basics: Introduction Laboratory studies of stem cells enable scientists to learn about the cells’ essential properties and what makes them different from specialized cell types. Scientists are already using stem cells in the laboratory to screen new drugs and to develop model systems to study normal growth and identify the causes of birth defects. Credible or inedible? - opinion - 31 August 2011 For all our sakes, lab-grown meat must be more yum than yuck IN 1932, Winston Churchill made a remarkable prediction about the future of food. Within half a century, he said, it would be possible to grow chicken breasts and wings without the "absurdity of growing a whole chicken". While he may have been a little optimistic, in the past 20 years there has been real progress in growing meat without animals. The world's first lab-grown sausage is scheduled to appear in six months, with a hamburger to follow later (see "Meat without slaughter"). Impressive as these advances are, there is a basic stumbling block when it comes to selling in vitro meat: public acceptability. Even if certified safe for human consumption, meat grown in a lab will have to overcome the "yuck factor" twice over. You can argue, rightly, that the realities of factory farming far outweigh the first of these concerns. Yet anyone who thinks these are winning arguments is being complacent. Let us hope it succeeds.

The Elements by Theodore Gray My book The Elements is based on photographs I've been collecting at my website periodictable.com for many years. The website includes not just pictures, but also more detailed descriptions than we could fit in the book, and most importantly, it includes full 360-degree rotating videos of almost all the objects. You really won't find this kind of resources anywhere else for any other subject, so please enjoy. If you don't have the book yet, please don't think this is page is a substitute for the real thing. Aside from the fact that people buying the book (and my other photo periodic table products) is what pays for me being able to continue hosting the website, there's really no substitute for a paper book in your hands. For the convenience of people who have the book, I've listed all the samples found on each page in the book, so you can easy look them up. Click on a page icon below to get a list of the samples on that page. Sort pages: By Atomic Number | Alphabetically | Text Listing

Principles behind the Agile Manifesto We follow these principles: Our highest priority is to satisfy the customer through early and continuous delivery of valuable software. Welcome changing requirements, even late in development. Agile processes harness change for the customer's competitive advantage. Deliver working software frequently, from a couple of weeks to a couple of months, with a preference to the shorter timescale. Business people and developers must work together daily throughout the project. Build projects around motivated individuals. The most efficient and effective method of conveying information to and within a development team is face-to-face conversation. Working software is the primary measure of progress. Agile processes promote sustainable development. Continuous attention to technical excellence and good design enhances agility. Simplicity--the art of maximizing the amount of work not done--is essential. The best architectures, requirements, and designs emerge from self-organizing teams.

LED Lights Make Augmented Vision a Reality | Elemental LEDucation LED Lights Make Augmented Vision a Reality Okay, this is just freaky. We know LED lights are versatile enough to be used for practically anything, but LED contact lenses? Really?! Yes, as it turns out, really. Once miniature green LEDs are developed (and they’re in the works, as of now), full color displays will be possible. Lead researcher Babak Parvis comments “You won’t necessarily have to shift your focus to see the image generated by the contact lens,” it would just appear in front of you and your view of the real world will be completely unobstructed when the display is turned off. Ah, the real world. Thanks to Extreme Tech for the quote and Trendhunter for the images. By the way, these freaky LED contact lenses may still be a product of the future, but a lot of cool LED products are of the present!