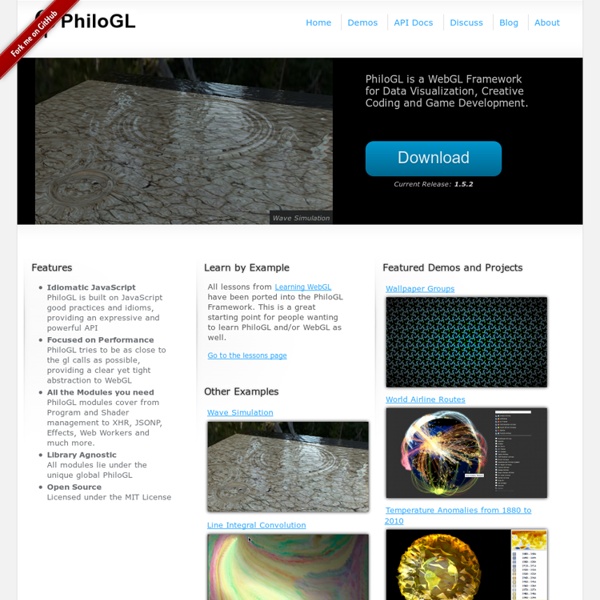 A suite of Javascript libraries and tools designed for working with HTML5 Recent Updates Follow @CreateJS November 2014 Added Unit Tests to EaselJSUpdates in preparation for new releases (coming soon). October 2014 Added 'Extras' to EaselJSTons of updates and pull requests in all libs July 2014 Major Updates to EaselJS Graphics The Story Why we built CreateJS About CreateJS CreateJS is a suite of modular libraries and tools which work together to enable rich interactive content on open web technologies via HTML5. Featured Projects Community Show & Tell. Ion Drift A port of the Flash game Ion Drift, b10b was able to build a CreateJS version in less than a day that hit target framerates on even the lowest devices, and outperformed ports to other libraries. By b10b b10b

HTML5 is not ready yet – and will never be (and that is a good thing) – HTML5 Question #1 One of the big questions I repeatedly got at events lately is this: Is HTML5 ready yet? The answer is no, because HTML5 is not a bowl of spaghetti that you know when they are ready by flinging them against the wall. You see, even HTML4.01 or XHTML for that matter was never “ready”. Standard compliance on the web is a means to an end. We used spacer GIFs and &nbsp; for padding and margins before CSS got support, we used tables for layout, we used image maps, we used image replacement, we used HTML generated from JavaScript for different browsers and whatever it took to get the best out of what we had in order to achieve the goal we set ourselves. The goal was always the same: deliver the best possible experience in an unknown, always changing environment. You don’t know what browser in what setting on which operating system with which security settings the end user has. What needs killing is the close-minded limited way we think about web applications. HTML is now a living standard.