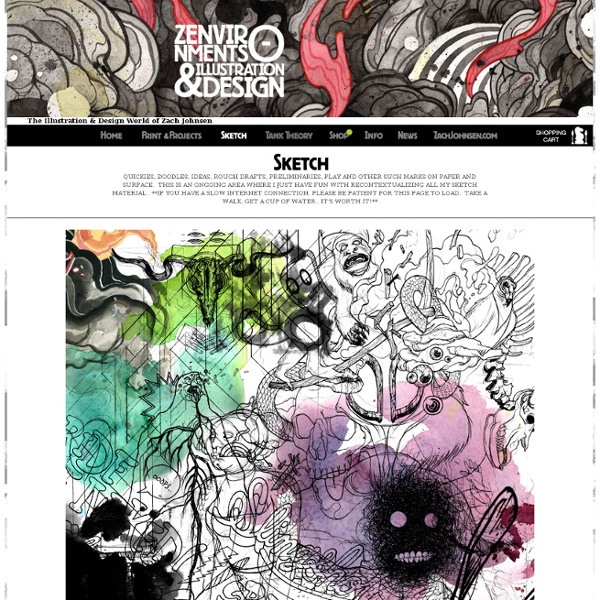 A Secret World - Illusion (Mobile) - The Most Amazing Creations in Art, Photography, Design, Technology and Video. It is fascinating how Mathew Borrett draws underground cities using positive and negative spaces. His illustrations are intricate, and seem like they may be inspired by M.C. Escher. Artwork © Mathew Borrett Link via The American Bear sharpie installation Utterly amazing installations by Heike Weber. She draws with permanentmarkers on acrylic floor and walls – surfaces that have reached up to 600 m2. I can’t begin to imagine how time consuming these breathtaking installations must have been. Via TRIANGULATION

Tattoos by Xoïl Posted on October 18, 2011 by lenny . Xoïl is a tattooer at Needles Side Tattoo in Thonon-les-Bains, France. How To Draw "How to Draw" is a collection of tutorials that will teach you everything from perspective basics to shading chrome. Never picked up a pencil before? Fear not! From simple line drawings to modern art and easy animations, we've got you covered. All projects come from Instructables.com and contain pictures for each step so you can start your masterpiece today! Instructables is the most popular project-sharing community on the Internet.

Cute & Stylish Sketches By Fabo The irresistibly adorable art of artist Fabo has been enchanting users for years. Fabo adds a touch of cuteness to his creations that makes them simply impossible to ignore. For Fabo’s complete library of work visit his deviantART page. Intricately Patterned Animal Illustrations It would be hard to tell from these strikingly detailed animals but artist Iain Macarthur got his start drawing cartoon characters. Now he carries his sketchbook on the bus, to the cafe and everywhere else as he includes more realism and in this case pattern in his illustrations. See more of his animals (and even some cartoons) at iainmacarthur.carbonmade.com.

Pointillism Detail from Seurat's La Parade de Cirque (1889), showing the contrasting dots of paint used in Pointillism Pointillism /ˈpɔɪntɨlɪzəm/ is a technique of painting in which small, distinct dots of color are applied in patterns to form an image. Georges Seurat and Paul Signac developed the technique in 1886, branching from Impressionism. The term "Pointillism" was first coined by art critics in the late 1880s to ridicule the works of these artists, and is now used without its earlier mocking connotation.[1] The movement Seurat began with this technique is known as Neo-Impressionism. The Divisionists, too, used a similar technique of patterns to form images, though with larger cube-like brushstrokes.[2] Technique[edit]

BACK TO THE FUTURE : Irina Werning I love old photos. I admit being a nosey photographer. As soon as I step into someone else’s house, I start sniffing for them. Most of us are fascinated by their retro look but to me, it’s imagining how people would feel and look like if they were to reenact them today… Two years ago, I decided to actually do this. So, with my camera, I started inviting people to go back to their future.. Now its time for KOREA, TAIWAN AND TOKYO.

The hand The hands are a notorious source of frustration. This section won't concentrate on the muscle structure, since the hand is very complex in this regard, and knowing this won't help much in drawing them. Instead, we'll look at proportions, range of motion, and possible simplifications. Structure and proportions Figure 2.20. Amazing Sketch Book Drawings by paul0v2 Thu, 09/22/2011 - 11:18 This amazing sketch book belongs to Russian artist and illustrator Irina Vinnik. These sketches are so amazingly done that they look more like the final piece, each page takes you to a different world of details that makes you dive into this drawings. Take a look and let us know what you think. For more from Irina Vinnik visit vinnik.net

Extreme City Perspectives by Artist Fabio Giampietro Our friends over at Laughing Squid spotted some unique paintings by Milan-based artist Fabio Giampietro. His dynamic high contrast black and white paintings are oil on canvas. Most of the works shown here are from his Vertigo series and true to the name these paintings have a dizzying effect on the viewer.