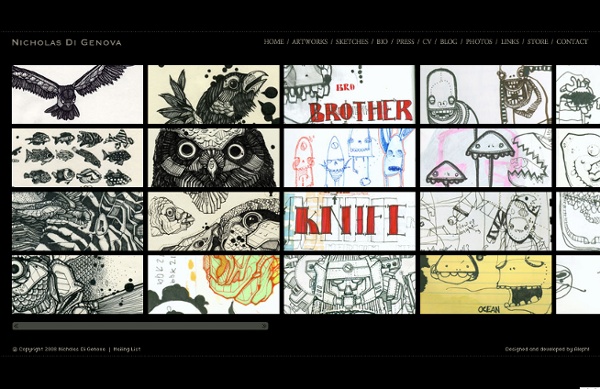 Shinybinary v2.1 - Art and designs of Nik Ainley Mark Verhaagen | News Bohemian Dreams in Digital Art Somewhere between the work of Tim Burton and Terry Gilliam lies the beautifully imaginative art of Alexander Jansson. His digital painting style is full of fuzzy fauna, twisted flora and plenty of stylish victorian houses… all with the dark and mysterious look you would expect in some bohemian’s dream. The deliciously rich and inviting colors beg your eye to explore the many layers of detail: lighted homes on elephants backs, glowing lanterns over shimmering water. See Also Reality With a Layer of Dreams Born in Uppsala, Sweden, Jansson now lives and works in Gothenburg where he runs his own design studio, Sleeping House. Ready to see this art animated? ↬ inspirefirst Known in some circles as the most amazing man in the universe, he once saved an entire family of muskrats from a sinking, fire engulfed steamboat while recovering from two broken arms relating to a botched no-chute wingsuit landing in North Korea.

JOSEPH CHRISTIAN LEYENDECKER ‹ 5election - The International Coolhunting Magazine oseph Cristian Leyendecker was born in 1874 in Germany and emigrated with his parents, his sister Augusta Mary and his brother Franck, to America in 1882. He was part of the generation that included Franklin Booth (1874), Howard Chandler Christy (1873), James Montgomery Flagg (1877), F.R. Gruger (1871),Maxfield Parrish (1870),Frank Schoonover (1877), W.T. Leyendecker was called upon to design posters and advertisements for Manz clients. There, the brothers studied in the famous Academie Julian and Colarossi, where they learned the classic techniques that would distinguish both their work, the delicate and demanding “hachure” method of drawing from the academic masters. The brothers returned to America in the Fall of 1898 and opened a studio in the Chicago Stock Exchange. To cross-hatch in oil paint, the brothers concocted a “secret formula” – a mixture of oils and turpentine – that was coveted by other artists. Around this time, J. By 1910, J.