Paul Cadden's Hyperrealistic Drawings Made with Graphite and Chalk 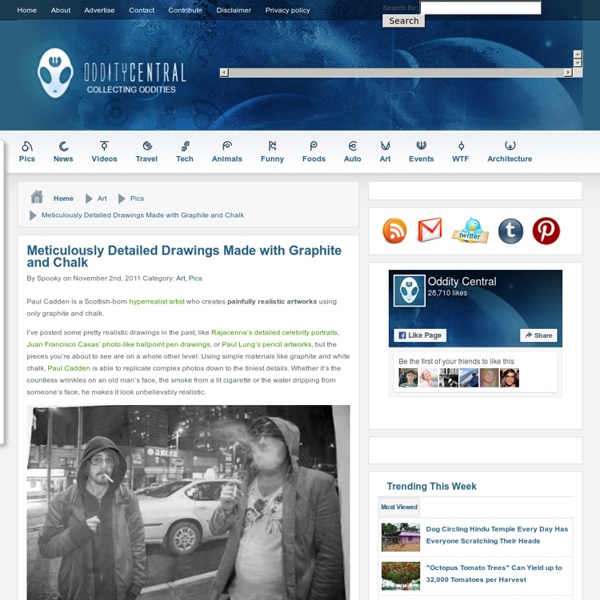 Paul Cadden is a Scottish-born hyperrealist artist who creates painfully realistic artworks using only graphite and chalk. I’ve posted some pretty realistic drawings in the past, like Rajacenna’s detailed celebrity portraits, Juan Francisco Casas’ photo-like ballpoint pen drawings, or Paul Lung’s pencil artworks, but the pieces you’re about to see are on a whole other level. Using simple materials like graphite and white chalk, Paul Cadden is able to replicate complex photos down to the tiniest details. Whether it’s the countless wrinkles on an old man’s face, the smoke from a lit cigarette or the water dripping from someone’s face, he makes it look unbelievably realistic. “Although the drawings and paintings I make are based upon a series of photographs, video stills etc, the art created from the photo is used to create a softer and much more complex focus on the subject depicted, presenting it as a living tangible object. via Deviant Art Reddit Stumble

The Photo-Realistic Pastel Drawings of Ruben Belloso Adorna Ruben Belloso Adorna, a young artist from Seville, Spain, has taken the art world by storm with his incredibly detailed portraits of real-life and fictional characters drawn exclusively in pastel on wooden canvas. Painting hyper-realistic works of art with oil paints requires great talent and skill, but drawing them with pastel sticks and crayons seems almost impossible. It appears the word “impossible” is not in Ruben Belloso Adorna’s dictionary, as the young Spanish artist manages to create stunning photo-quality masterpieces using only pastels. Born in 1986, he studied Fine Arts at the University of Seville, and has already made a name for himself in the art world, participating in numerous solo and group exhibitions, and winning several awards. Looking at the quality of his colorful drawings, and the way he is able to bring out the emotions of his subjects, it’s easy to see why many are already calling Ruben a genius of the 21st century.

Photo Realistic Paintings by Alyssa Monks Using photos for loose reference, Brooklin-based artist Alyssa Monks creates incredibly realistic paintings that make viewers scratch their eyes in awe. Although many set photo realism as their ultimate goal, artists that can make people ask themselves “Is this a photo I’m looking at?” when they look at their masterpieces, are really rare. Alyssa Monks is one of those few talented masters that can recreate a photo from scratch using a paintbrush, as well as add their own personal touch and making an artwork really their own. Looking at her amazing works, it’s hard to believe they’re actually painted, and viewers are often only convinced when thy get close enough to see the brush strokes.

Franco Clun's Drawings Look Like High-Resolution Photographs Italian artist Franco Clun uses only pencil and paper to create these incredibly realistic portraits that can easily be mistaken for photographs. Believe it or not, he’s a self-taught drawing master who has never studied art… I’ve always found hyperrealism fascinating, and the collection of articles on this amazing art genre that I’ve posted on Oddity Central throughout the years is proof of that. I never get tired of looking at drawings and paintings so masterfully executed that they resemble high-resolution photos, and I consider myself lucky whenever I discover the works of truly gifted artists, like Franco Clun. The Italian-born master of the pencil says he has never taken art classes and that everything he knows he learned from experience and from reading some drawing manuals.

Artist Book Series + Daily Art And Design Blog And Creative Community I couldn’t help but direct everyone to fellow public art loving blog Street Art Utopia as they have compiled a pretty decent list of the best street art of 2011. If you are just getting into the wonderful world of pasting, spraying or making the streets a more creative place, this list is a great place to start (short of Wall and Piece). One of the best things about this genre is it’s diversity – you can decided what you find gimmicky/twee or meaningful and awe-inspiring. Street art has always been the public’s voice, and the art world has yielded success to those with great ideas and a call for change. Jason Sho Green's Mind-Blowing Doodle Portraits Jason Sho Green uses a simple ball-point pen to create incredibly intricate portraits that are actually made of other smaller drawings. Whether we’re good at it or not, we all like to doodle, but American artist Jason Sho Green has taken the pastime to a whole new level with his amazing doodle portraits that look like modern-day mosaics. Seen from a distance, his works looked like detailed recreations of his subjects, for which he uses shadows to outline the fine characteristics of the face, but as you approach them you realize there’s a lot more to them. Jason actually uses a ball-point pen to “assemble” his portraits from various doodles, including images of people, animals and fantastic creatures. If you like Jason Sho Green’s doodle portraits as much as I do, you might also want to check out Sagaki Keita’s artworks made from thousands of drawn whimsical creatures. via My Modern Met

Chan Hwee Chong Makes Spiral Illustrations with a Single Line In one of the most impressive advertising ideas I have ever seen, Singapore-based art director and designer Chan Hwee Chong uses a single long line to create spiral recreations of famous artworks. In an inspired advertising campaign for Faber-Castell, designer Chan Hwee Chong demonstrates his unbelievable talent by creating spiral illustrations inspired by some of the most popular masterpieces in history. Using the above mentioned company’s pens, he starts with a blank canvas, and by drawing a continuous line in a spiral he somehow manages to make detailed reproductions of the famous works of art. The level of precision and control in Chong’s creations is simply amazing, and although I watched a short video of him in action, I’m still not sure how he manages to achieve such detailed reproductions with a single line. via Neatorama

Digital Circlism Portraits by Ben Heine Using an original technique he calls Digital Circlism, artist Ben Heine creates detailed portraits of celebrities like Eminem, Bob Marley or Elvis Presley. A Belgian artist born in the Ivory Coast, Heine is most famous for his Pencil vs Camera series, which was covered by many of the major online media outlets, but his Digital Circlism portraits are equally, if not more impressive. Using a sharp round brush in Photoshop CS4, he applies thousands of circles on a black background, until he creates a colorful, realistic portrait. You might think he uses some kind of automated process to apply every circle, but that’s actually the most remarkable thing about Ben Heine – he adds every one of the circles individually. Each circle has a different color, a different tone and a different size, which makes creating a single one of these artworks very time consuming. A new technique, developed by Ben Heine himself, Digital Circlism could certainly develop into an important artistic movement.

A4 papercuts by Peter Callesen Peter Callesen creates amazing paper cuts that tell a story, not only he assembles the cutted paper into mini-sculptures, but he also uses the cutted space to show something. Beautiful Eggshell Carvings by Ben Tre Vietnamese artist Ben Tre uses his steady hands and a tiny dentist’s drill to carve detailed portraits and traditional landscapes on chicken eggshells. The exquisite artworks can be mounted on an LED-illuminated base and used as artistic lamps. Ben Tre says he only started carving eggshells a year ago, yet each of his numerous works appear to have been executed by a seasoned master. He apparently experimented with a number of fine tools to get the desired effect, before borrowing a small electrical drill from a dentist friend, and has been using it ever since. Ben takes about a day to complete on of his amazing eggshell carvings, and specializes in both celebrity portraits and landscapes.

Preview: Audrey Kawasaki, Amy Sol, and "In the Wake of Dreams" at Thinkspace Gallery Tonight, October 8, at Thinkspace Gallery, Audrey Kawasaki, Amy Sol, Stella Im Hultberg, and Mari Inukai will be showcasing new paintings, drawings, and prints in the exhibition, In the Wake of Dreams. We have a few preview images of Sol and Kawasaki signing their prints, and some shots of the gallery set-up. Head over to Thinkspace in Culver City to see the full show. Here are the details from Thinkspace: We will open at 1PM today to begin sales of the print set. We’ll remain open throughout the day with the artists arriving at 5PM for a reception that will run until 8PM. The Doodle Art of Sergei and Vyacheslav Savelyv Sergei and Vyacheslav Savelyv are two twin brothers with an extraordinary talent for doodling. They uses colored pens and pencils to draw what seem like endless circular doodles and create incredibly detailed portraits of world famous icons. Sergei and Vyacheslav Savelyv have so far displayed their wonderful artworks only in their home town of Petrozavodsk, in Russia’s Karelia region, but I think you’ll agree their talent deserves worldwide recognition. The creative duo who works under the name “SaveL” have an impressive doodle portrait portfolio of famous celebrities like Johnny Depp, Robert De Niro or Antonio Banderas, all created with ordinary pens of pencils.

Rajacenna Draws Celebrity Portraits Rajacenna is an 18-year-old self-taught artist from the Netherlands who draws the most realistic portraits I have ever seen, using only pencils. I’m a big fan of realistic drawings, and I’ve previously featured amazing works like the pencil drawings of Paul Lung, the ballpoint pen portraits of Juan Francisco Casas, or Cristina Penescu’s detailed scratchboard masterpieces, but at only 18 years of age Rajacenna is in a league of her own. Born in 1993, she started modelling for various Dutch companies when she was only 4, and at 5 years old she made her first appearance on television. She starred in films, soap-operas and tv-series and at 12 she became the host of Kinderjournaal, the first Dutch web-tv for kids. She only took up drawing in 2009, and although she had never taken any art classes she produced some stunning pieces.

Mesmerizing Mixed Media Portraits (12 total) Using a variety of different tools including a bic pen, watercolors and Chinese ink, artist Florian Nicolle creates amazing, mixed media portraits. After a rigorous amount of drawing and painting, she then adds texture and detail using Photoshop. As she explains to us, "I try to create an image that retains its freshness of the first paint stroke, the expressions of the line have to be very free and spontaneous..I draw a picture as if I wrote a text, with the same tool, the same freedom, with erasures, lines, scribbles etc..."