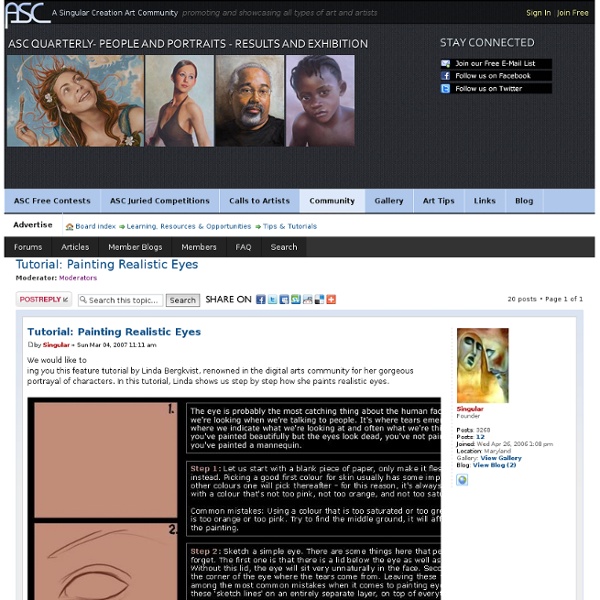 How to Draw Flowers and Plants" Flower Image Gallery Publications International, Ltd.Learn how to draw a rose and other flowers and plants with our step-by-step instructions. Bring out your inner artist as you learn how to draw a rose. See more pictures of flowers. Avoiding Tangents: 9 Visual Blunders Every Artist Should Watch Out For Have you ever been caught off-guard by a visual tangent in your art? The word tangent usually just indicates that two things are touching, but in art the term describes shapes that touch in a way that is visually bothersome. When creating a composition, there are so many different things to juggle that it’s easy to miss even the obvious flaws—and that’s when tangents sneak in.

How to Create a Professional Magazine Layout A few times a each month we revisit some of our reader’s favorite posts from throughout the history of Vectortuts+. This tutorial by Otto Coster was first published on August 4th 2010. Have you ever wondered how professional designers strike the perfect balance between text and image? Using InDesign's powerful type tools, you will learn techniques to help you set and arrange a magazine layout. Step 1 Setting up the Document We'll be using a standard A4 size document for this tutorial.

sketchbook scans The sketchbook is—to borrow a term from the new millenniums’ popular discourse—an artist’s BFF. It’s a diary for the visually inclined—a place where artists can most comfortably explore their personal thoughts, work out their visual needs, practice, maintain a visual history, and hopefully create the unpolished work that will eventually lead to amazing work for the world to see. But, sometimes, when we’re lucky, we get to see the process. Below are 50 beautiful sketchbook scans from 35 talented artists. Allen Sutton Mattias Adolfsson 20 creative guerilla marketing campaigns We are so overwhelmed with advertising everywhere that it becomes hard for creative agencies to make ads that stand out. Guerilla advertising is a great way to make unusual, surrealistic visuals and situations that passers by will remember. Here is a selection. 1.

How to Draw Ears For a video version of this tutorial visit www.proko.com/how-to-draw-ears-anatomy-and-structure In this tutorial I will go over the parts of the ear and suggest an easy way to remember all these complex shapes. At the end, I will show a step by step of an ear drawing. Basic Forms The simplified volume of the ear is very much like a megaphone. This is easier to see from the back, where the concha is like the tubular part and the helix is the lip part of the megaphone.

GPP Street Team Don't you agree that receiving comments from your crusade posts really makes the effort worthwhile? We have a great team of players who share their interpretations of the challenge but then spend alot of time tracking the other crusaders to leave kind words of encouragement. It's nice to know there is a community of fellow artists who are trying out the same things you are which makes their comments an even more important part of the process. It's the next best thing to gathering around a table and working together. I love hearing that many friendships have been formed through this platform.

expressions Boy, I didn't know what I was getting myself into when I started this. I've had requests for some sort of expressions tutorial dating back a while now, so I figured, "Sure! I can explain expression drawing...and it'll be way better than all those tutorials out there that are nothing but charts of generic expressions. Yeah! Just give me a day or two to whip something up..." Um. Great Resume Designs that Catch Attention–and Got People Hired Inspiration June 21, 2011 When applying for a job, you have no choice but to do your best to outshine competition. Even before winning an interview, your qualifications (or in some instance, your character) are already judged by the resume you’ve submitted.

How to Think of What to Draw Edit Article Edited by Dvortygirl, Laptop123, Nicole Willson, Random and 41 others Have you been inspired to draw, including getting inspiration from famous artists, or are just doing it for fun? Drawing can often be fun, but sometimes it can be hard to think of ideas for what to draw. Well, don't worry about that -- there are many, many different ideas - just read this article to find out what they are. Ad 35 Inspiring Color Palettes from Master Painters Putting together a great color palette for your design work can be one of the most challenging aspects of any project. And many times, color palettes are built from some source of inspiration. So why not be inspired by some of history’s greatest master artists?

50 illustrations of alice Alice in Wonderland is a novel written by English author Charles Lutwidge Dodgson under the pseudonym Lewis Carroll. It tells the story of a girl named Alice who falls down a rabbit hole into a fantasy world populated by peculiar and anthropomorphic creatures. The film will be remade by Disney and is due for release on March 5, 2010 in Disney Digital 3-D and IMAX 3-D as well as in regular theaters. Alice, as the main character of the novel, is popularly depicted wearing a pale blue knee-length dress with a white pinafore overtopping. While in paintings of other illustrations, there are a few changes, including her attire, manner and personality.