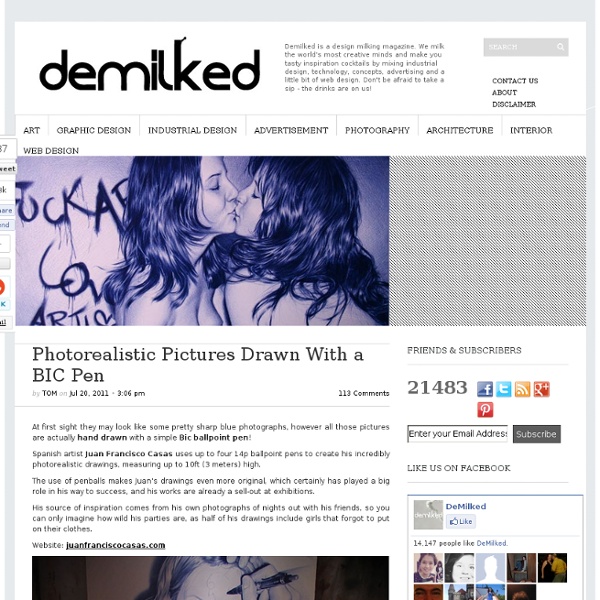 EmailEmail At first sight they may look like some pretty sharp blue photographs, however all those pictures are actually hand drawn with a simple Bic ballpoint pen! Spanish artist Juan Francisco Casas uses up to four 14p ballpoint pens to create his incredibly photorealistic drawings, measuring up to 10ft (3 meters) high. The use of penballs makes Juan’s drawings even more original, which certainly has played a big role in his way to success, and his works are already a sell-out at exhibitions. His source of inspiration comes from his own photographs of nights out with his friends, so you can only imagine how wild his parties are, as half of his drawings include girls that forgot to put on their clothes. Website: juanfranciscocasas.com

Frank Romeo - Route 66 Artwork Page Not Found Oops... the page that you have requested can not be found. About Fine Art America Diego Fazo creates photo-realistic drawings with charcoal pencil At just 22 years old, Italian artist Diego Fazo has developed the skill to create photo-realistic drawings using a simple charcoal pencil. His latest creation, pictured below, has drawn hundreds of positive comments on his Deviant Art profile. Don’t tell me you can tell the image below is a drawing and not a high-definition photograph, because I don’t buy it.

Photorealistic Charcoal Drawings of Epic Waves Though artwork created in Photoshop or Illustrator can be nothing short of extraordinary, sometimes it's more impressive to see pieces created by more traditional means. Brooklyn-based artist Robert Longo made these incredible drawings of massive, thundering waves using just charcoal (on mounted paper). Called Monsters, the drawings almost look like black and white photos of that crescendo moment before an epic wave breaks. Photo-Realistic Portraits Drawn with Chalk We’ve all had our eyes fooled by artists with photorealistic techniques such as Pedro Campos’ picture perfect oil paintings, Paul Cadden’s hyperrealistic pencil drawings, Samuel Silva’s ballpoint pen drawing, and Nathan Welsh’s city paintings, but never before had we seen it done with chalk…until now! Rubén Belloso Adorna of Seville, Spain creates enormous portraits that are so detailed, you would not believe they are not photographs, but they are actually drawings made with chalk pastels. You can see the true magnitude of each drawing when you see the photos of Adorna working on them, yet even when you zoom in and look closely they still look like a high definition photo. See Also WHITEBOARD DRAWINGS DONE ON A SHORT LUNCH BREAK The 26 year old artist holds a degree in Fine Arts from the University of Seville.

"We See People In The Crowd" piece by Guilherme Kramer Have you ever felt lost in the crowd, a nameless face wandering in the masses? Well, Brazilian artist Guilherme Kramer decided to eliminate those feelings of loneliness by giving each nameless face that he saw proper recognition. Across the course of one year, Kramer was inspired to draw the faces that he saw in his daily life onto a giant blank wall of an office in São Paulo, Brazil.

Art Glossary Definition Foreshortening in a painting makes parts of an object or subject closest to you appear much larger relative to other parts, for instance a head can appear as big as a leg. The key to painting it successfully is believing what you eyes are seeing. Photo ©2010 Marion Boddy-Evans. Licensed to About.com, Inc. Post-It Note Monsters by John Kenn I love how these monster drawings channel the spirits of Edward Gorey and Maurice Sendak in perfect measure. Created in artist John Kenn’s spare time (between raising twins and directing childrens shows) each of these images is very tiny: it was drawn using only office supplies on Post-It notes. Check out Kenn’s large collection of top-notch work at johnkenn.blogspot.com.

How To Draw Hands Tutorials So everybody knows that the hands and the fingers are one of the hardest things to draw. So here is a personal collection of different hand references, hope to enjoy it and never stop practice. Hogarth hand poses from Iron Giant (middle of page) Mickey Mouse Hand Model Sheet by Les Clark ca. 1932 Merlin hand poses via Deja View Pencil drawings by Kate Riley The British artist Kate Riley (Cath Riley) draws only with a pencil. Her ascetic work evaluated Nike, GQ, M & C Saatchi and The New York Times. Many of the works of Kate are in private collections of British, American and Swiss collectors.

Japanese Custodian Spends 7 Years Drawing Incredibly Intricate Maze Almost 30 years ago a Japanese custodian sat in front of a large A1 size sheet of white paper, whipped out a pen and started drawing the beginnings of diabolically complex maze, each twist and turn springing spontaneously from his brain onto the paper without aid of a computer. The hobby would consume him as he drew in his spare time until its completion nearly 7 years later when the final labyrinth was rolled up and almost forgotten. Twitter user @Kya7y was recently going through some of her father’s old things (he’s still a custodian at a public university) when she happened upon the maze and snapped a few photos to share on Twitter. She was quickly inundated by requests from friends and eventually strangers who had endless questions, the most obvious being: are you making prints!?

Tiffany Bozic Paintings by Tiffany Bozic. Her show “Confiding to Strangers” is up at Joshua Liner Gallery in New York, until December. Gorgeous Hand Drawn Illustrations by Si Scott Here you have a series of illustrations called “animals” by Si Scott. Every design is hand drawn perfection! You can tell he has an incredible attention to detail. Enjoy! The Creepy Pencil Art of Laurie Lipton I actually thought the woman (at top) was biting an apple, well, that was until I scrolled to see the full image. There is certainly shock value in Laurie Lipton‘s drawings. Her pencil illustrations take longer to create than a painting of the same size and detail. Notes about the artist (from bio):

Stan Prokopenkos Blog - StumbleUpon The Basic Forms To draw the head from any angle you must first understand its basic structure. Look past all the distracting details and visualize the underlying forms.