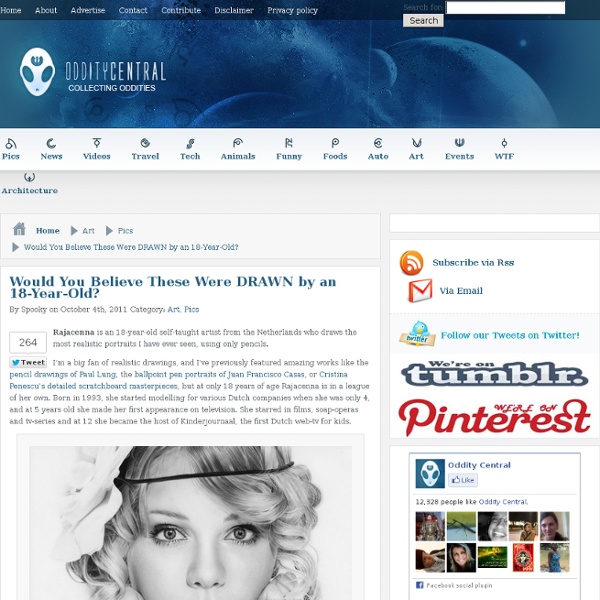 Rajacenna is an 18-year-old self-taught artist from the Netherlands who draws the most realistic portraits I have ever seen, using only pencils. I’m a big fan of realistic drawings, and I’ve previously featured amazing works like the pencil drawings of Paul Lung, the ballpoint pen portraits of Juan Francisco Casas, or Cristina Penescu’s detailed scratchboard masterpieces, but at only 18 years of age Rajacenna is in a league of her own. Born in 1993, she started modelling for various Dutch companies when she was only 4, and at 5 years old she made her first appearance on television. She starred in films, soap-operas and tv-series and at 12 she became the host of Kinderjournaal, the first Dutch web-tv for kids. She only took up drawing in 2009, and although she had never taken any art classes she produced some stunning pieces. Reddit Stumble

The Doodle Art of Sergei and Vyacheslav Savelyv Sergei and Vyacheslav Savelyv are two twin brothers with an extraordinary talent for doodling. They uses colored pens and pencils to draw what seem like endless circular doodles and create incredibly detailed portraits of world famous icons. Sergei and Vyacheslav Savelyv have so far displayed their wonderful artworks only in their home town of Petrozavodsk, in Russia’s Karelia region, but I think you’ll agree their talent deserves worldwide recognition. The creative duo who works under the name “SaveL” have an impressive doodle portrait portfolio of famous celebrities like Johnny Depp, Robert De Niro or Antonio Banderas, all created with ordinary pens of pencils.

Joe Fenton Draws Solitude in 10 Months Detailed artworks take a lot of time to complete, but American artist Joe Fenton took it to a whole new level when he decided to dedicate 10 months of his life to a single drawing. Solitude is indeed one of the most intricate drawings I have ever seen, and knowing it’s all been done with an 0.5 mechanical pen makes it that much more impressive. Maybe you’re under the impression the artist just worked on it a few times a week, throughout the 10 months it took to complete, but in reality Joe Fenton drew on the 5 meter high and 8 foot across piece of paper for 10 hours a day, 7 days a week. Most people would have probably given up after only a few days, but Joe showed enough confidence and patience to see it through. “It took courage to start it as I had never done anything that size before,” he told My Modern Met. “As you can imagine, you have to invest a lot of your time to complete something like this.

Pencil drawings by Kate Riley The British artist Kate Riley (Cath Riley) draws only with a pencil. Her ascetic work evaluated Nike, GQ, M & C Saatchi and The New York Times. Many of the works of Kate are in private collections of British, American and Swiss collectors. Digital Circlism Portraits by Ben Heine Using an original technique he calls Digital Circlism, artist Ben Heine creates detailed portraits of celebrities like Eminem, Bob Marley or Elvis Presley. A Belgian artist born in the Ivory Coast, Heine is most famous for his Pencil vs Camera series, which was covered by many of the major online media outlets, but his Digital Circlism portraits are equally, if not more impressive. Using a sharp round brush in Photoshop CS4, he applies thousands of circles on a black background, until he creates a colorful, realistic portrait. You might think he uses some kind of automated process to apply every circle, but that’s actually the most remarkable thing about Ben Heine – he adds every one of the circles individually. Each circle has a different color, a different tone and a different size, which makes creating a single one of these artworks very time consuming. A new technique, developed by Ben Heine himself, Digital Circlism could certainly develop into an important artistic movement.

Pencil Drawings by Paul Lung Lovely black and white photos, wouldn’t you say? Well, can you believe these were actually done completely by pencil? Paul Lung, a 38-year-old artist, from Hong Kong, needs only an 0.5 mm technical graphite pencil and sheets of A2 paper to create some of the most unbelievable works of art. Paul has loved to draw ever since he can remeber, and now he does it for 3-4 hours every day, when he comes home from work. Lessons Drawspace Pro Lessons are designed for artists of all levels and educators, and are logically organized into resources and activities. Eventually, all lessons and E-books authored by Brenda Hoddinott will be available here: four to eight brand new lessons and newly-revised older lessons are being added every month! Upgrade Now: Download all 310 lessons and 4 e-books!

Jason Sho Green's Mind-Blowing Doodle Portraits Jason Sho Green uses a simple ball-point pen to create incredibly intricate portraits that are actually made of other smaller drawings. Whether we’re good at it or not, we all like to doodle, but American artist Jason Sho Green has taken the pastime to a whole new level with his amazing doodle portraits that look like modern-day mosaics. Seen from a distance, his works looked like detailed recreations of his subjects, for which he uses shadows to outline the fine characteristics of the face, but as you approach them you realize there’s a lot more to them. Jason actually uses a ball-point pen to “assemble” his portraits from various doodles, including images of people, animals and fantastic creatures. If you like Jason Sho Green’s doodle portraits as much as I do, you might also want to check out Sagaki Keita’s artworks made from thousands of drawn whimsical creatures. via My Modern Met

Man Spends 34 Years Building a Toothpick Model of San Francisco San Francisco has been rendered by many other artists before, but never quite like this. Scott Weaver always dreamed he would build the world’s largest toothpick model and 34 years ago he started working on it. Fast-forward to present day and he still hasn’t fulfilled his dream, but he did create one of the most impressive toothpick sculptures in the world. “Rolling through the Bay” is a 9 feet tall, 7 feet wide and 2 feet deep toothpick model of san Francisco that features 4 pingpong ball rolling tracks and several entry points. Tutorial Tuesday: Foreshortening Tricks Hi folks! Tutorial Tuesday is going to be a basic one – I’m a bit under the weather currently so this may not be the best post, but I want to give you something that I feel is important in the world of drawing – some pointers on foreshortening. Check this out. Foreshortening is basically an optical illusion created from a compressed looking drawing in perspective.

Franco Clun's Drawings Look Like High-Resolution Photographs Italian artist Franco Clun uses only pencil and paper to create these incredibly realistic portraits that can easily be mistaken for photographs. Believe it or not, he’s a self-taught drawing master who has never studied art… I’ve always found hyperrealism fascinating, and the collection of articles on this amazing art genre that I’ve posted on Oddity Central throughout the years is proof of that. I never get tired of looking at drawings and paintings so masterfully executed that they resemble high-resolution photos, and I consider myself lucky whenever I discover the works of truly gifted artists, like Franco Clun. The Italian-born master of the pencil says he has never taken art classes and that everything he knows he learned from experience and from reading some drawing manuals.

Stephen Wiltshire,Autistic Artist,Known As “The Human Camera” Stephen Wiltshire, who is autistic,drew in detail a 7 square-mile area of London from his own memory after just a 20 minutes flight with the helicopter over the city.The artist has amazed everyone by drawing hundreds of London’s buildings in exact scale, such as the Swiss Re tower or Canary Wharf on a 13ft curving canvas in 5 days. Stephen,actually named as “the human camera”,was diagnosed with autism at the age of three.At that early age he was unable to make himself understood.Some teachers from Queensmill, a school in Fulham for special needs children,forced him to shout “Paper!!!” by taking away his materials and then he managed to develop language skills by learning words related to his work.Now,at the age of 33,Stephen Wiltshire is capable to communicate with others,leading an independent life. Via DailyMail Reddit Stumble